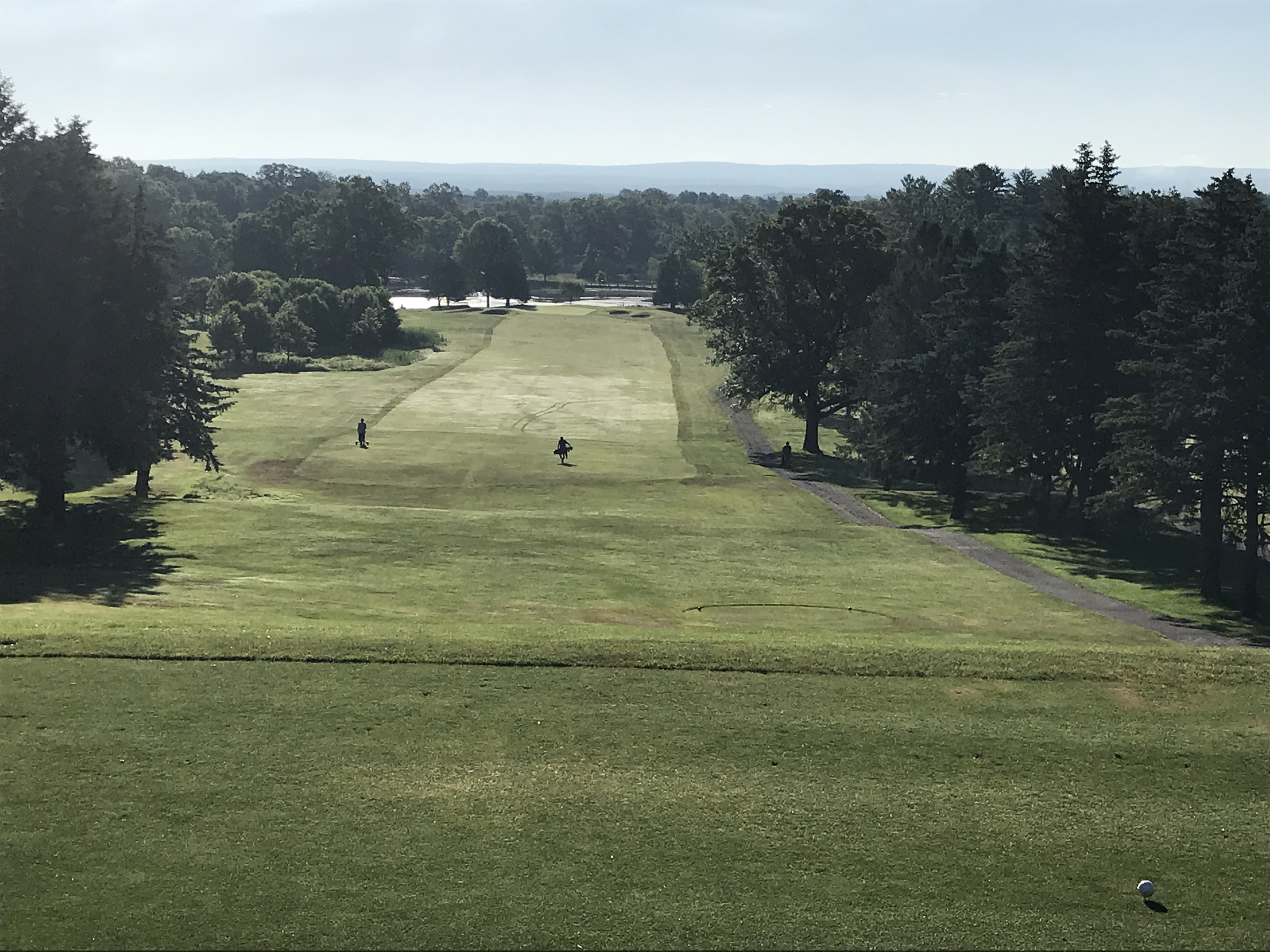 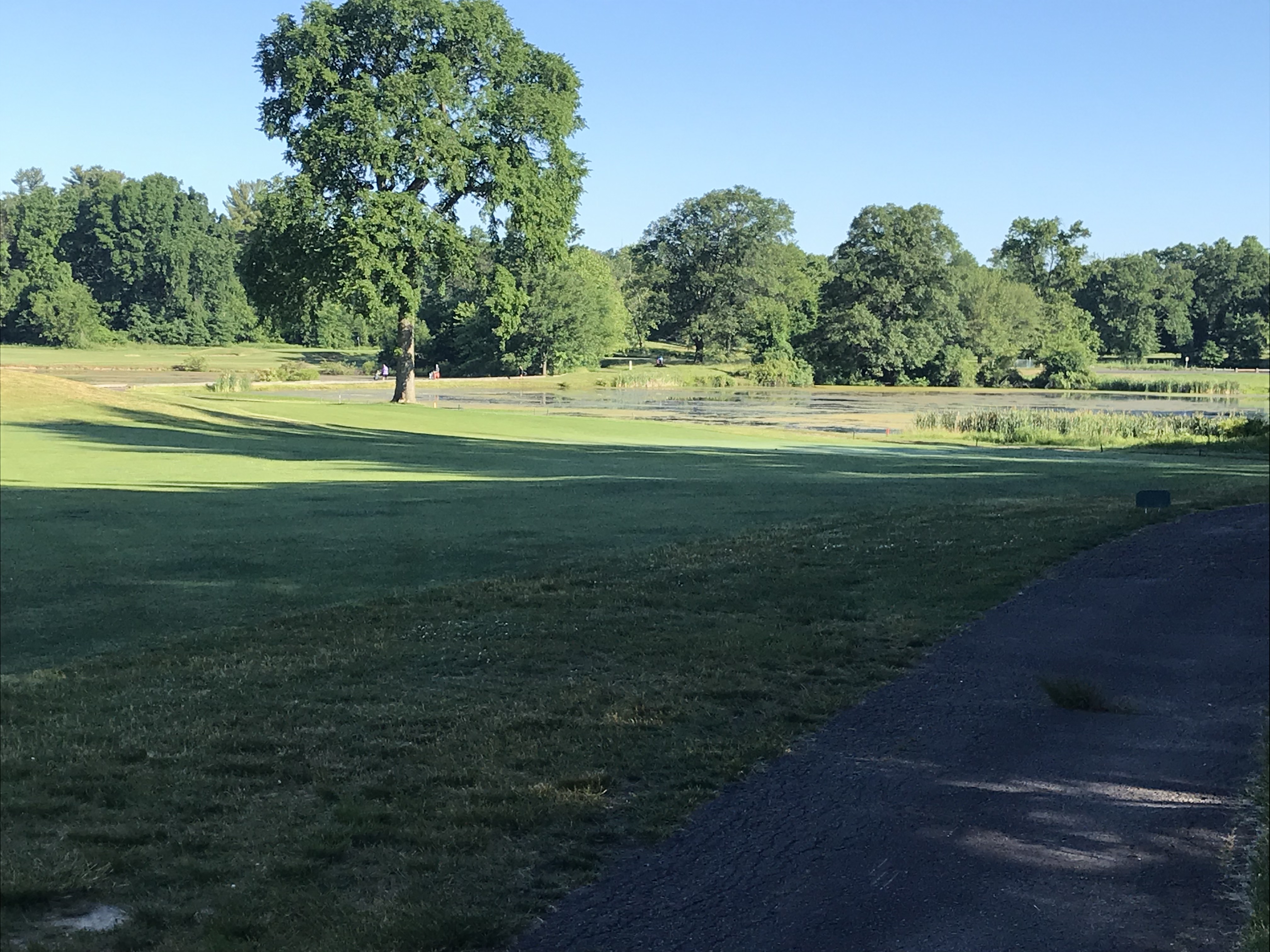 #2 landing area, looking back over the pond and back to the tee. 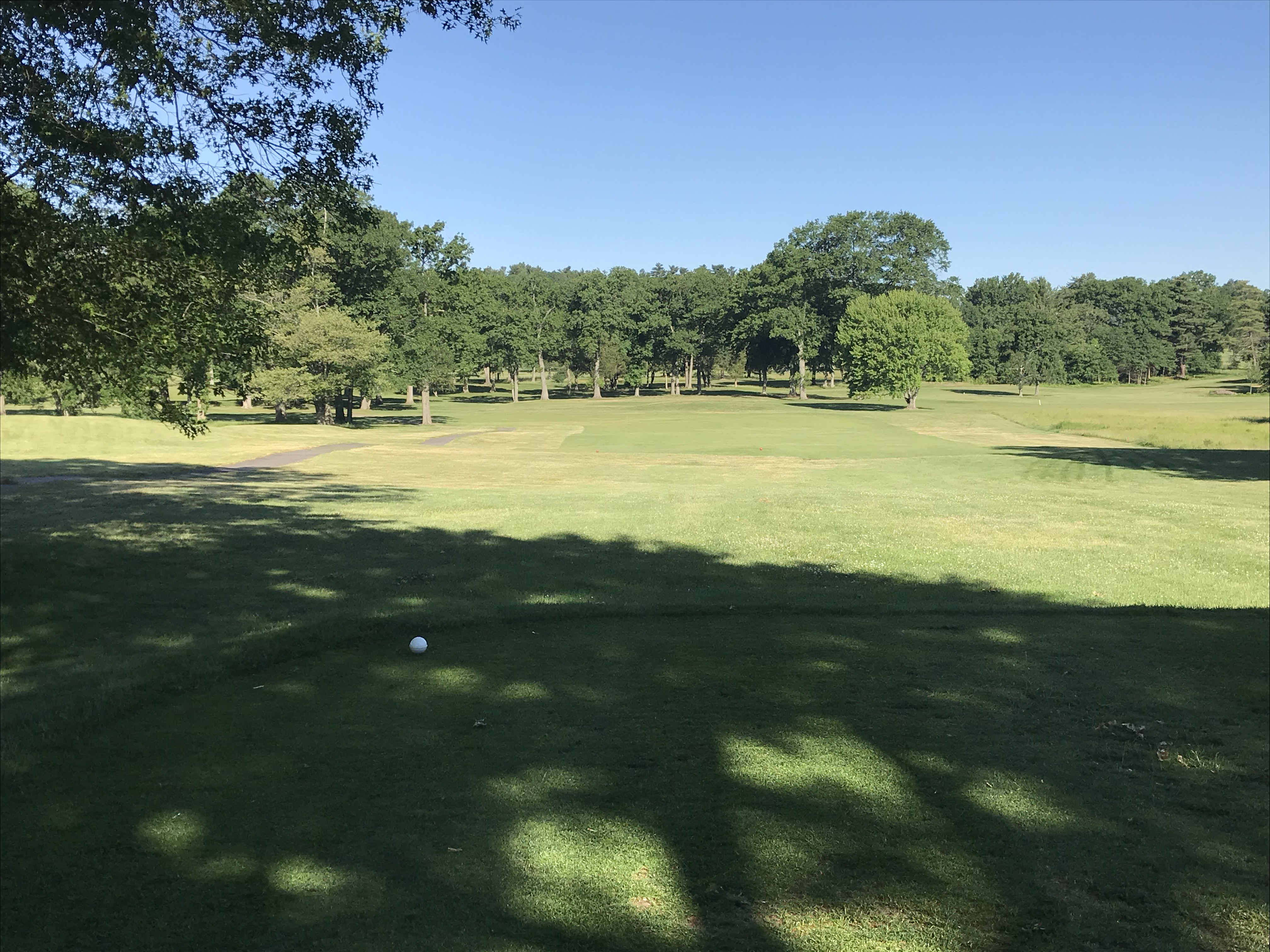 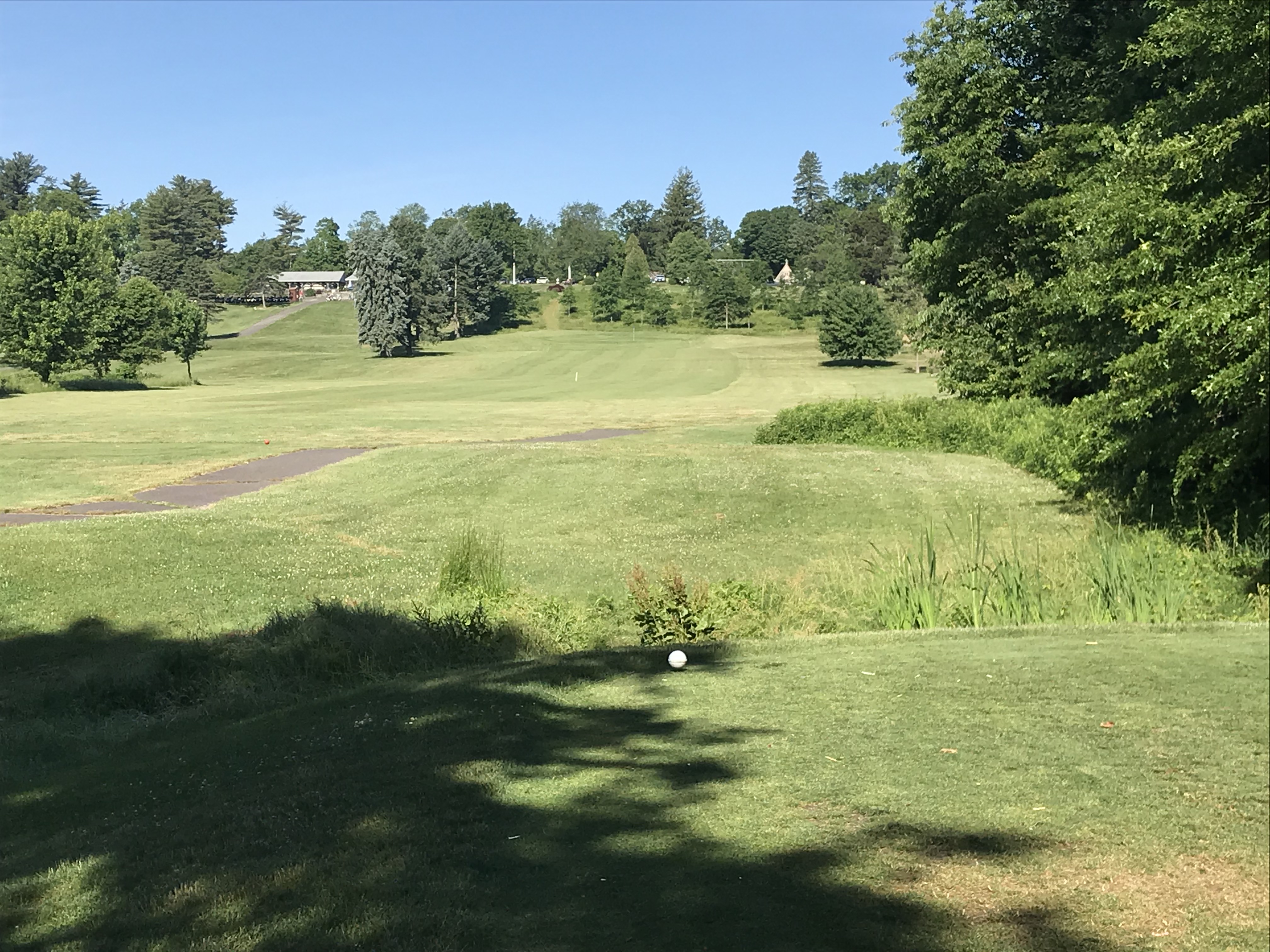 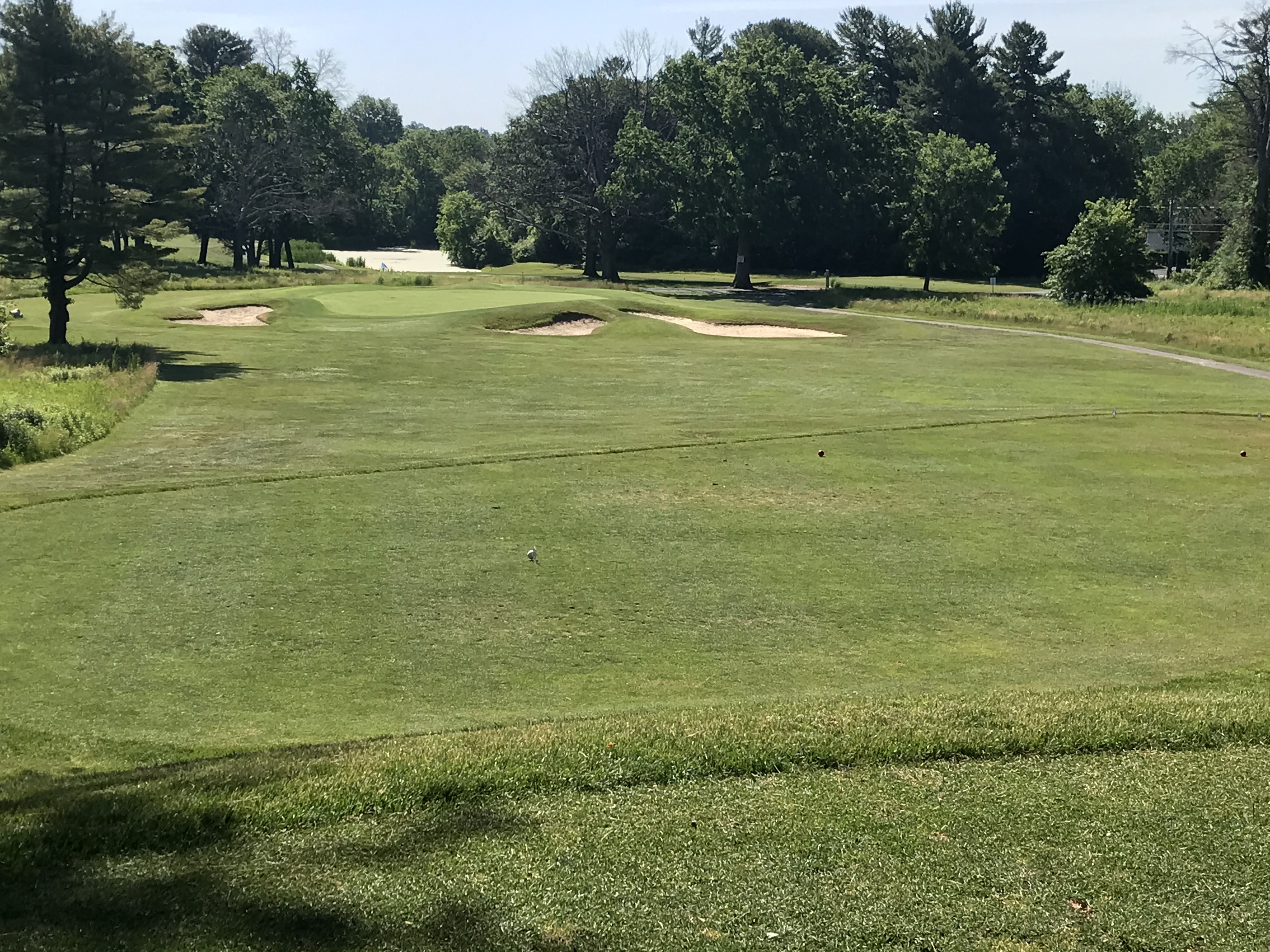 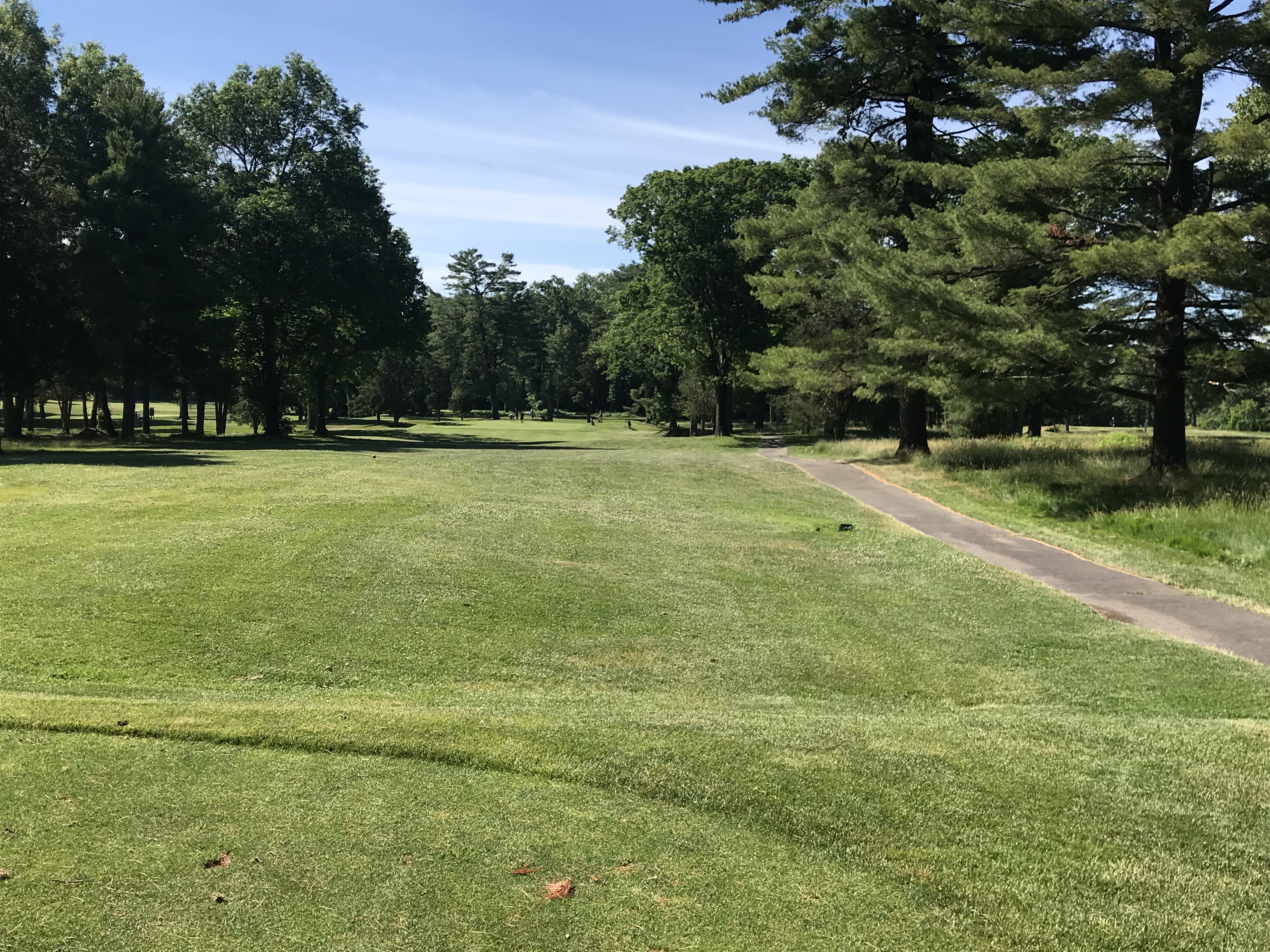 #11, par three through a chute of trees to an elevated green, 246 yards from back tees. 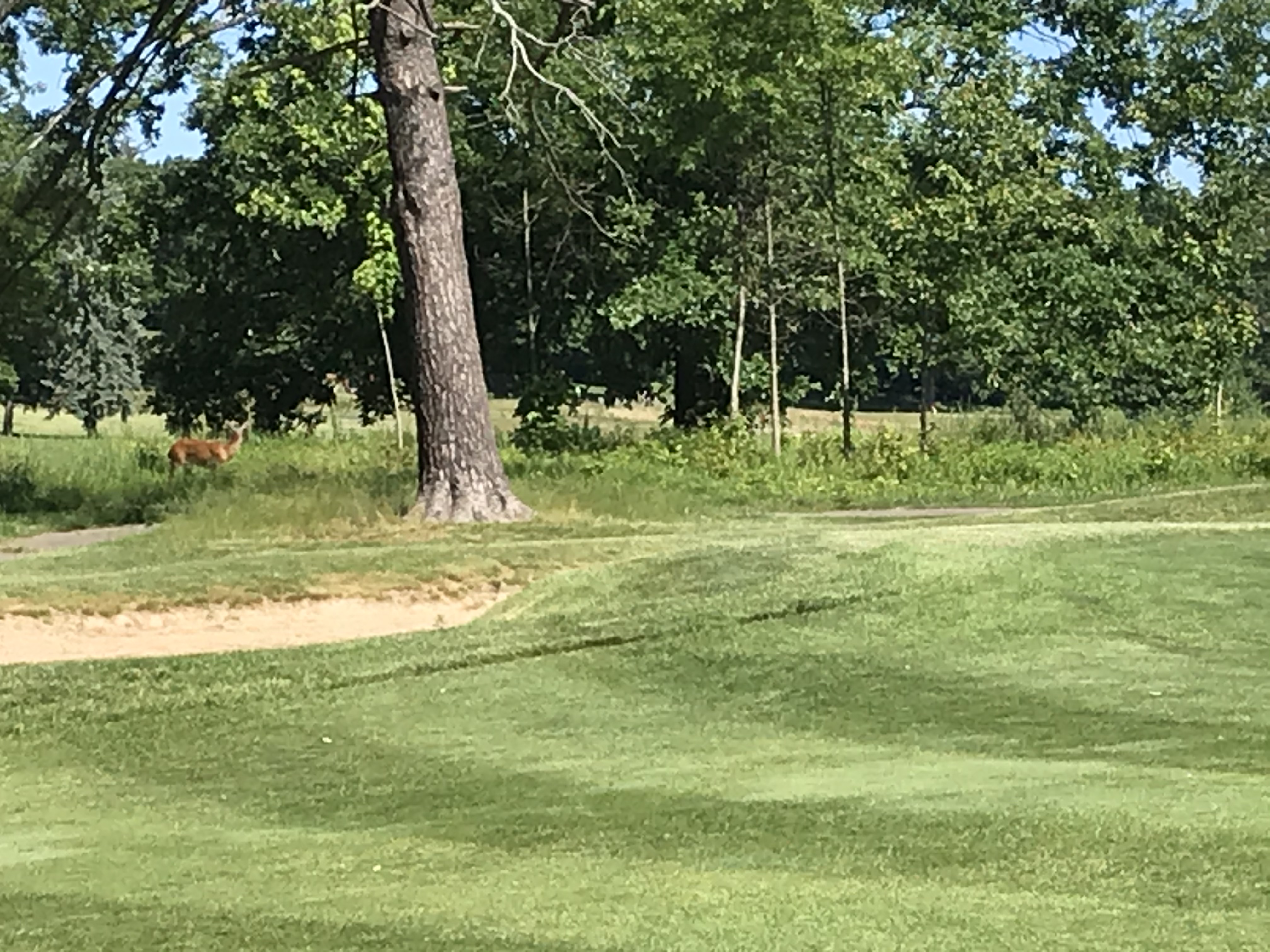 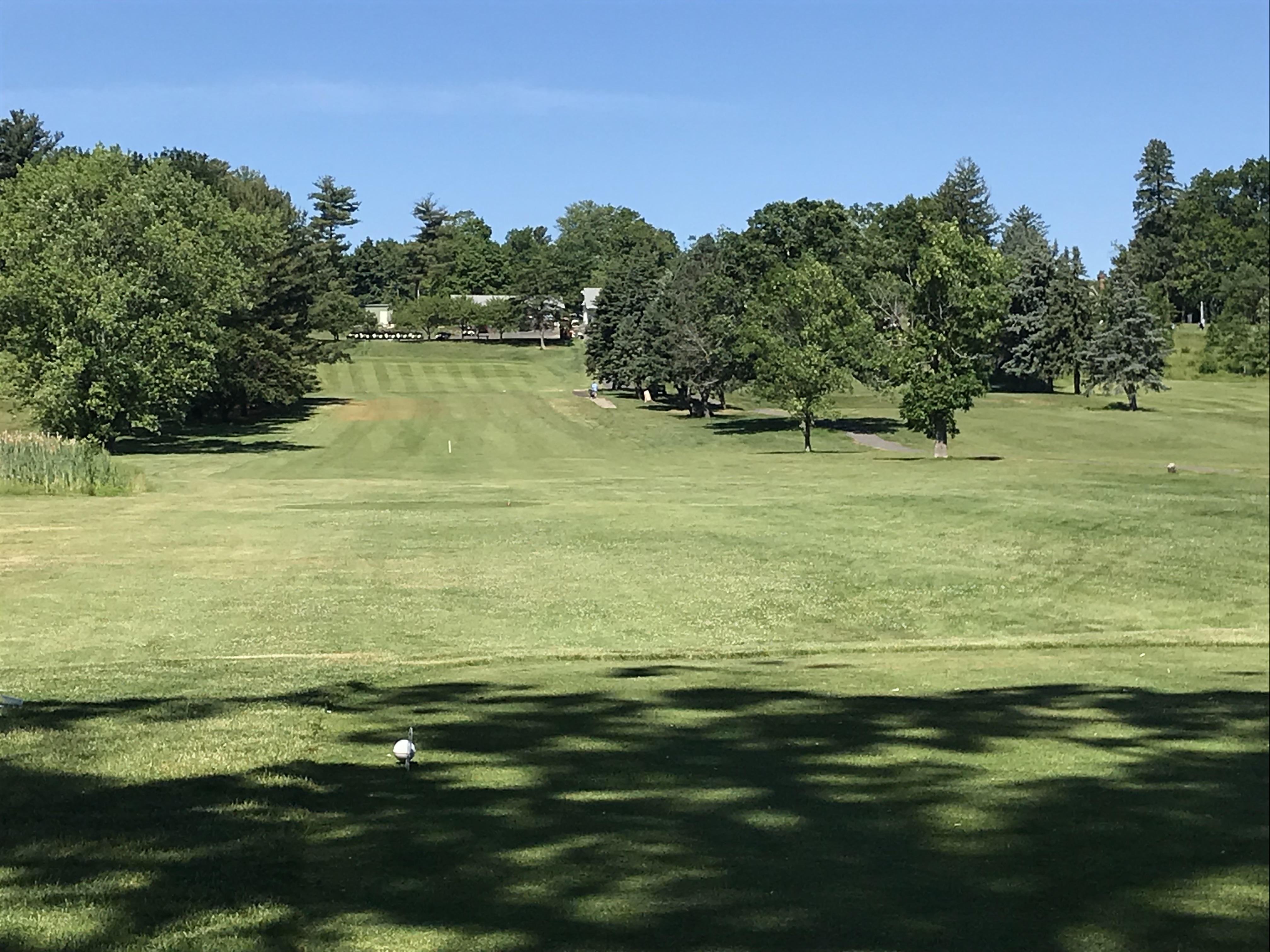 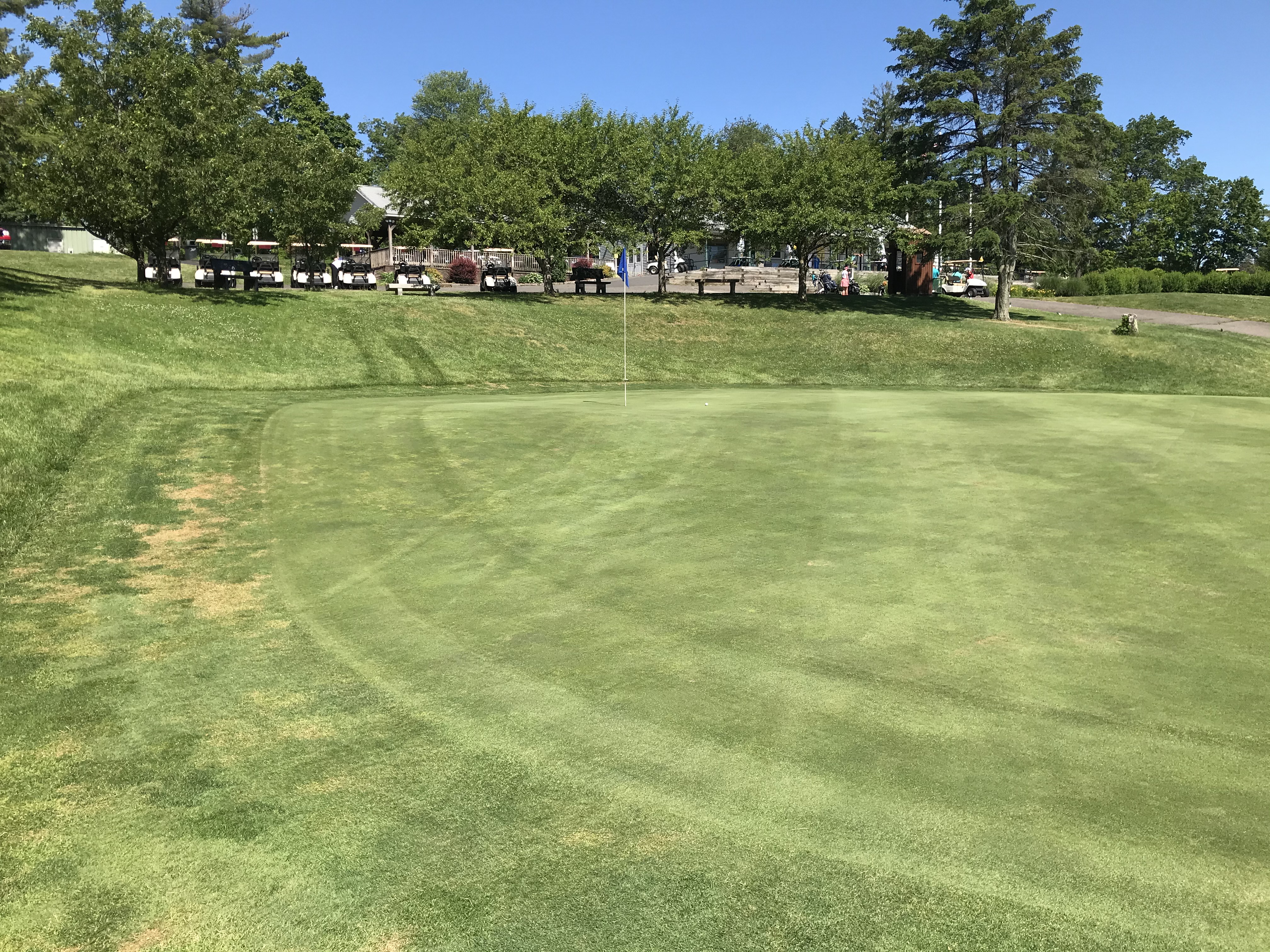 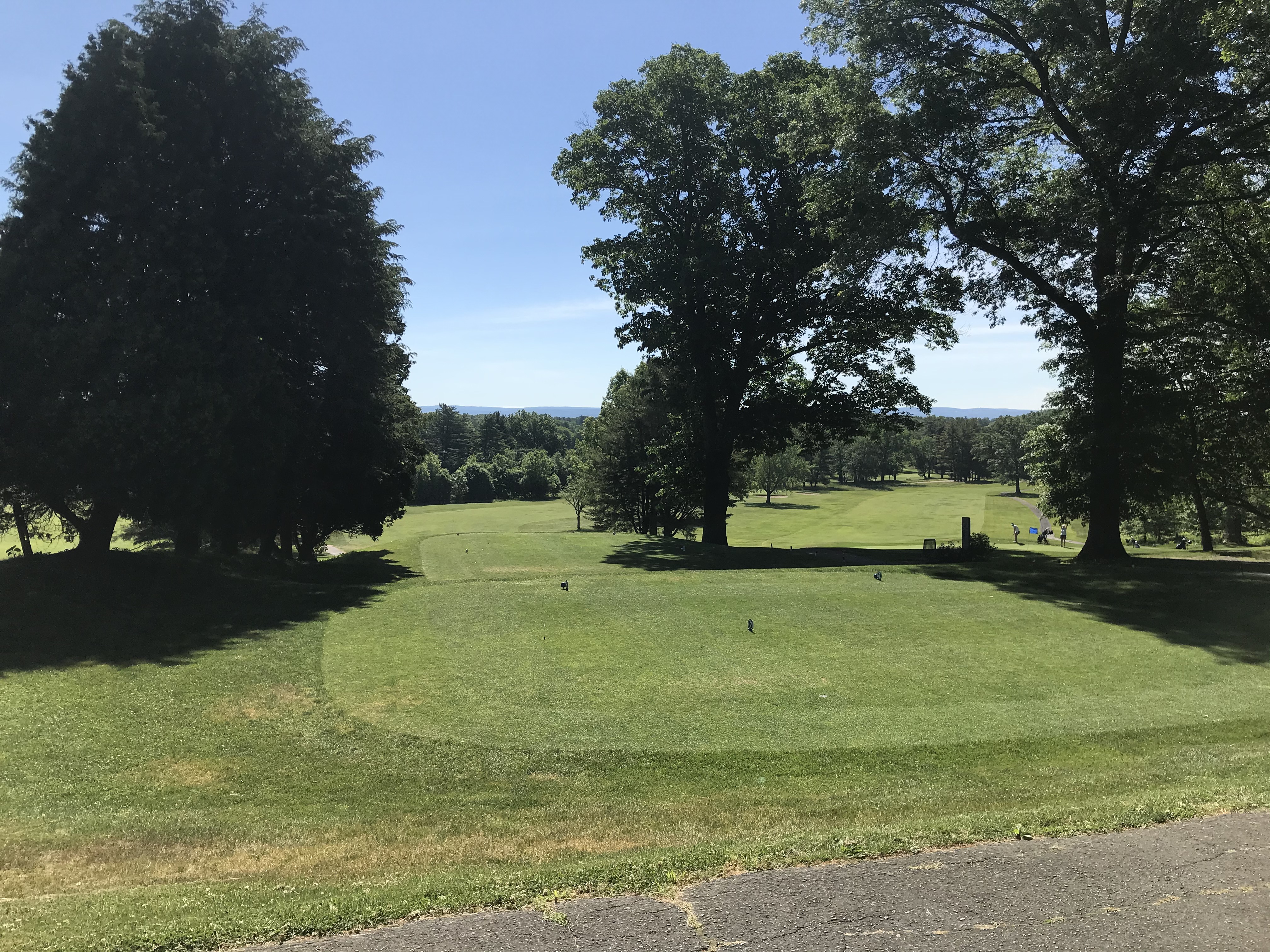 First, a confession.  My review of the 27-hole Goodwin Park Golf Course complex in Hartford (bordering neighboring Wethersfield) may be favorably tainted by the fact that it’s where I first took up the game nearly 50 years ago.  I had discovered my dad’s set of pristine clubs in the garage — I don’t believe he ever used them — and asked if I could have the set.  Thus, began a lifelong quest for par, or something better.

I remember one round in my early teens when I hooked up with an elderly African-American gentleman.  When we finished the round, he said to me, “You know, you have a pretty good swing but you’d probably have a lot more success if you didn’t hold your right-handed clubs with a left-handed grip.”  Who knew I was a natural southpaw?  After talking my dad into buying a left-handed starter set for me, it was game on.

“Goody” is made up of the nine-hole North Course and the 18-hole “Championship” South Course.  The bunker-less North Course, which the Goodwin website says is “affectionately known as ‘The Flat Nine’” — but what we affectionately call “Hackers” — is a great place for beginners or for anyone trying to get in a quick nine.  Dating to 1906, the par 70 South Course (just over 6,000 yards from the blue tees) has, over the decades, gone from being in decent shape to horrible shape to decent again.  It’s the sister, municipal course to the much-heralded Keney Park layout all the way on the other side of the city (see Larry Gavrich’s review of Keney).  For years, Goody was light-years better than Keney, if not in design then in conditioning (such as it was).  That all changed in recent years when millions of dollars were invested in Keney to bring it back to its former glory.  While investment hasn’t been on the same scale at Goodwin Park, money has been spent to improve conditioning, and it shows.

The South course begins benignly enough with a straightaway, downhill and short par-five.  Number 2 is a par-four that’s only 322 yards from the white tees, but the drive requires a carry over a pond.  The real challenge is whether to go right of a large tree in the middle of the fairway that is a shorter carry (but brings a large bunker into play), or take the longer carry to the left of the tree, setting up a shorter, straightforward approach.  Number 5 is a 90-degree, dogleg left, par-four requiring a drive of at least 200 yards to get past the trees, and No. 7 is a short, all-carry par-three (over another large pond) to a small green.  The front nine closes with an uphill, straightaway par-four that’s only 356 yards from the whites.  However, standing on the tee, you’d swear the pin is 600 yards away.

The 10th is a fun, downhill, dogleg-right par-four.  The par-three eleventh might be the hardest hole on the course, playing to nearly 250 yards from the blues and through a narrow corridor of trees to a plateaued and small green.  Fifteen is a short, downhill par-3 of less than 140 yards from the white tees that reminds you of No. 7 at Pebble Beach — without the Pacific Ocean on the right and behind.  The 18th presents a good closing challenge as it’s an uphill par-four with a two-tiered green, nestled some 30 feet above the fairway.

Complemented by a friendly staff, Goody presents a casual, yet challenging, experience.  If you really want to cap off the experience, make the short ride to Franklin Giant Grinder on Franklin Avenue to get one of their enormous grinders (a sub or hoagie to those of you not from Connecticut) to satisfy your appetite.  Pure bliss.