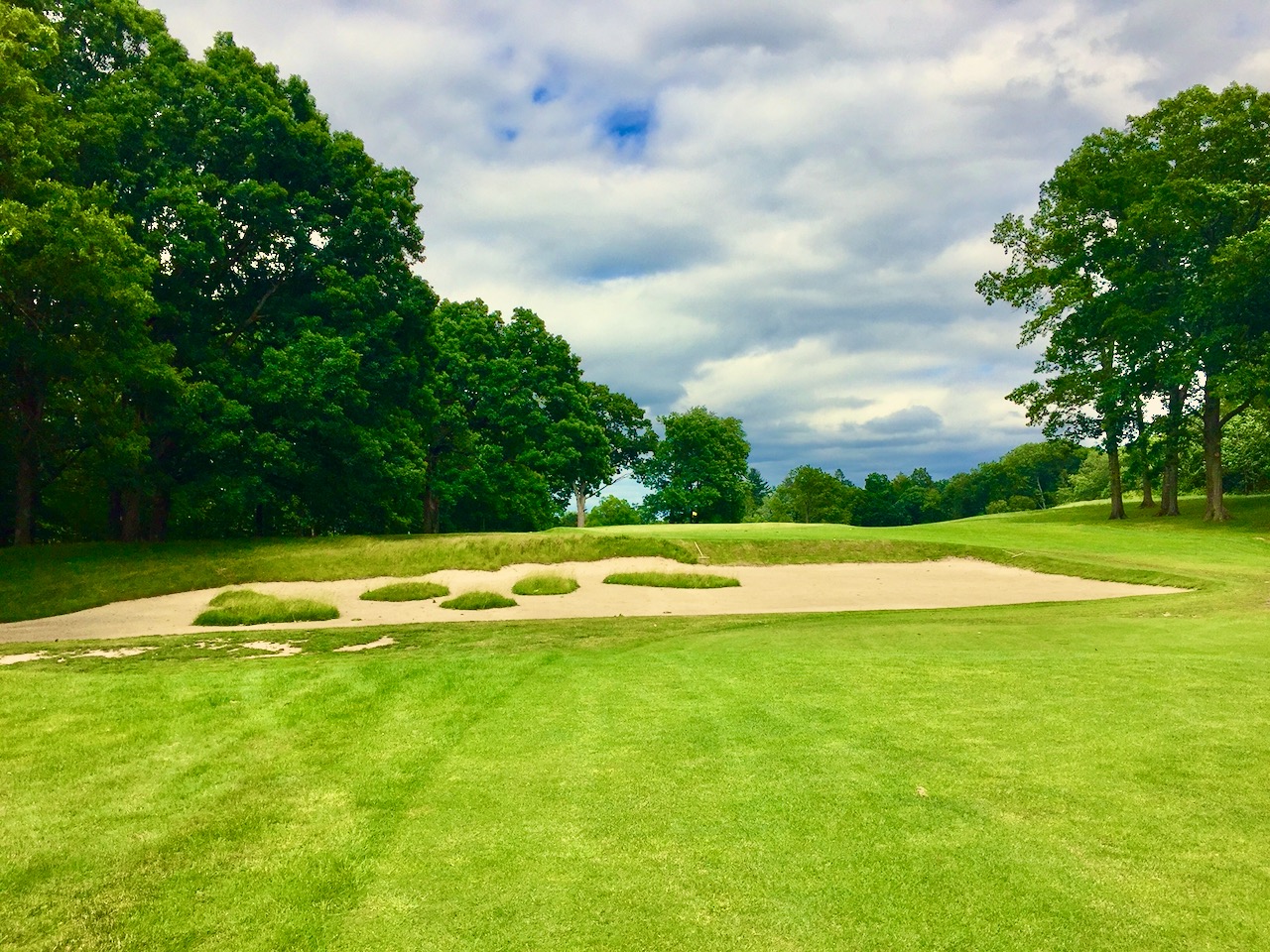 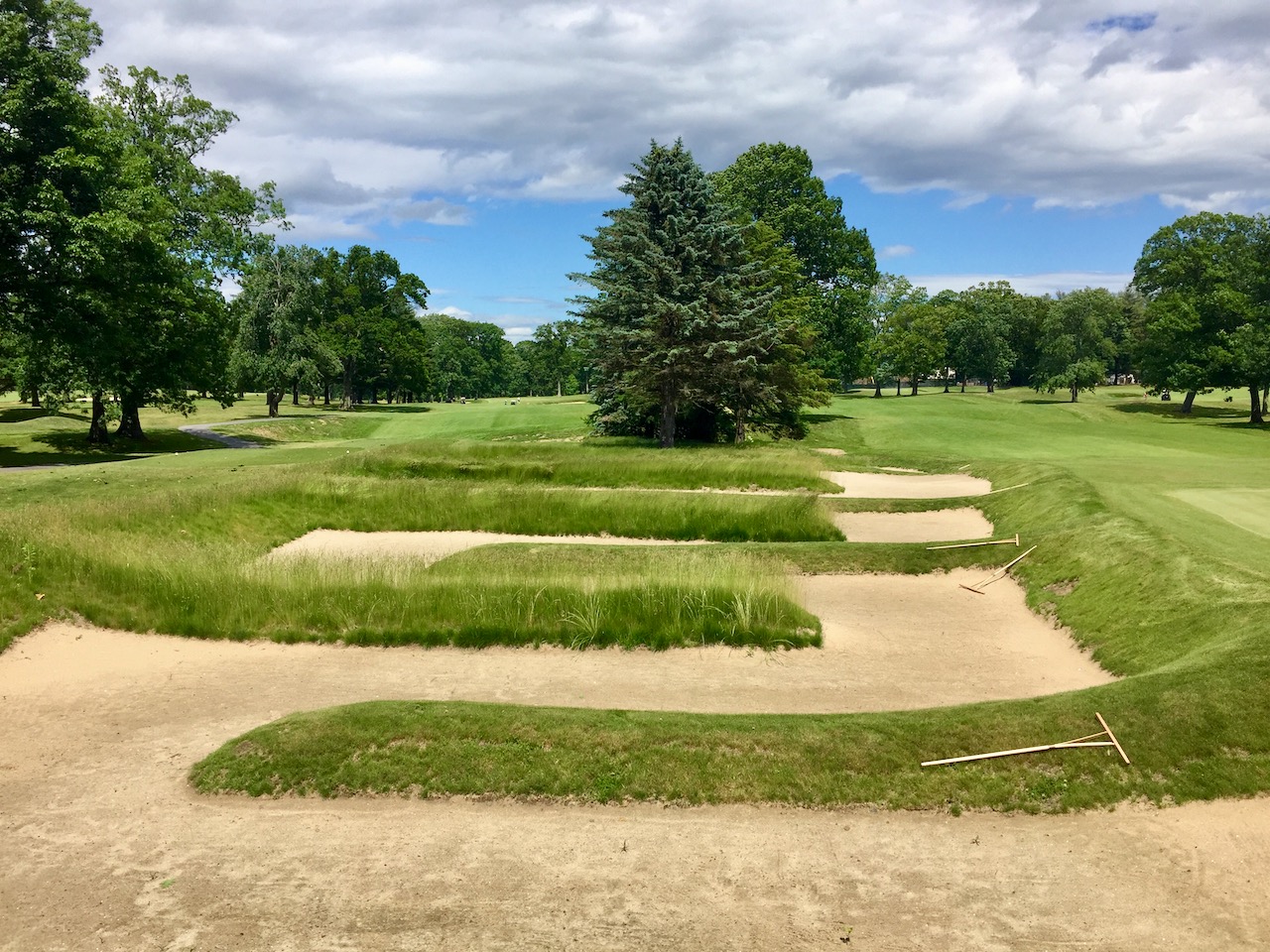 The church pew bunkers to the right of the 8th green. 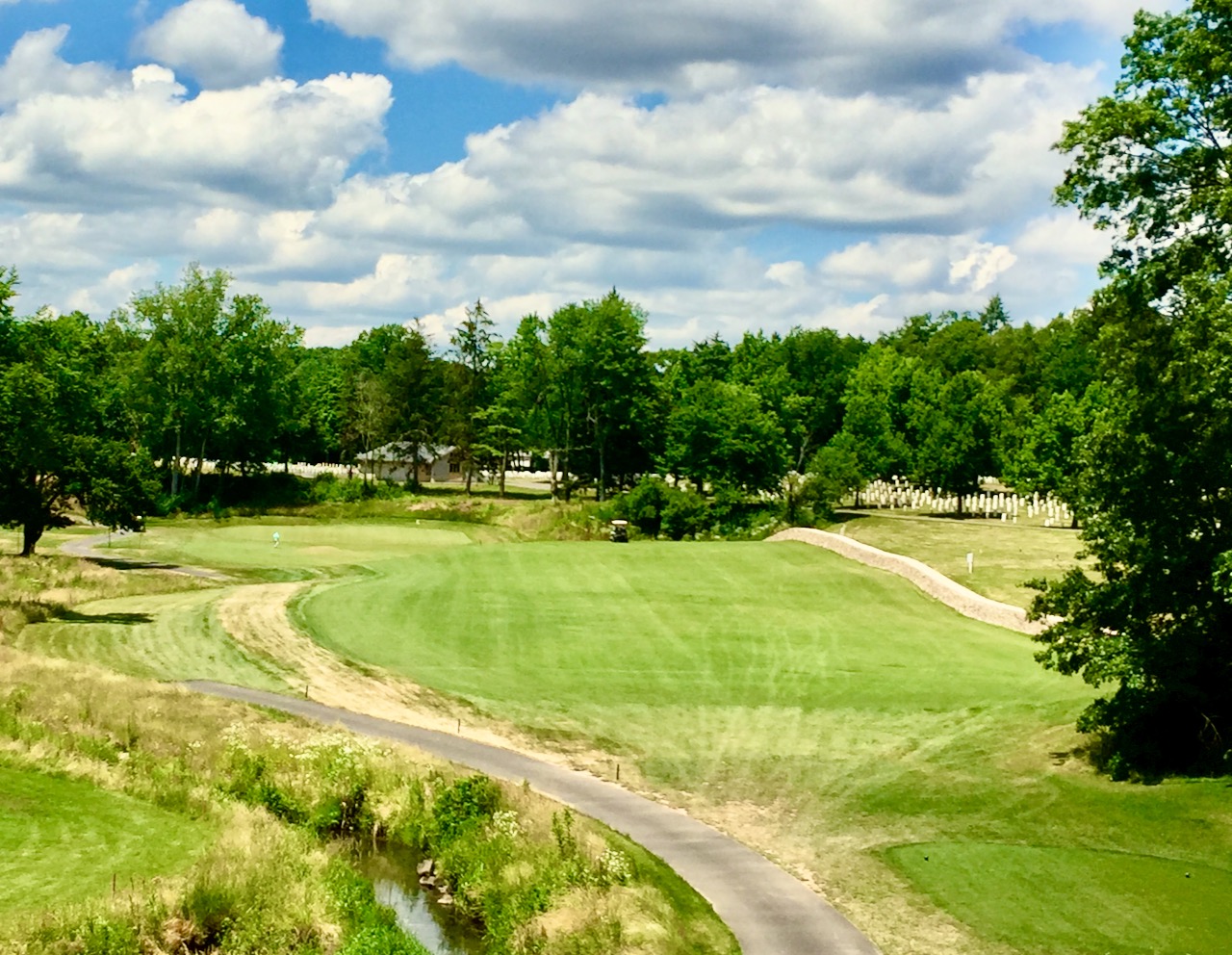 The shortest par 4, under 300 yards from an elevated tee. Hit your drive over the cemetery wall on the right and you're dead. 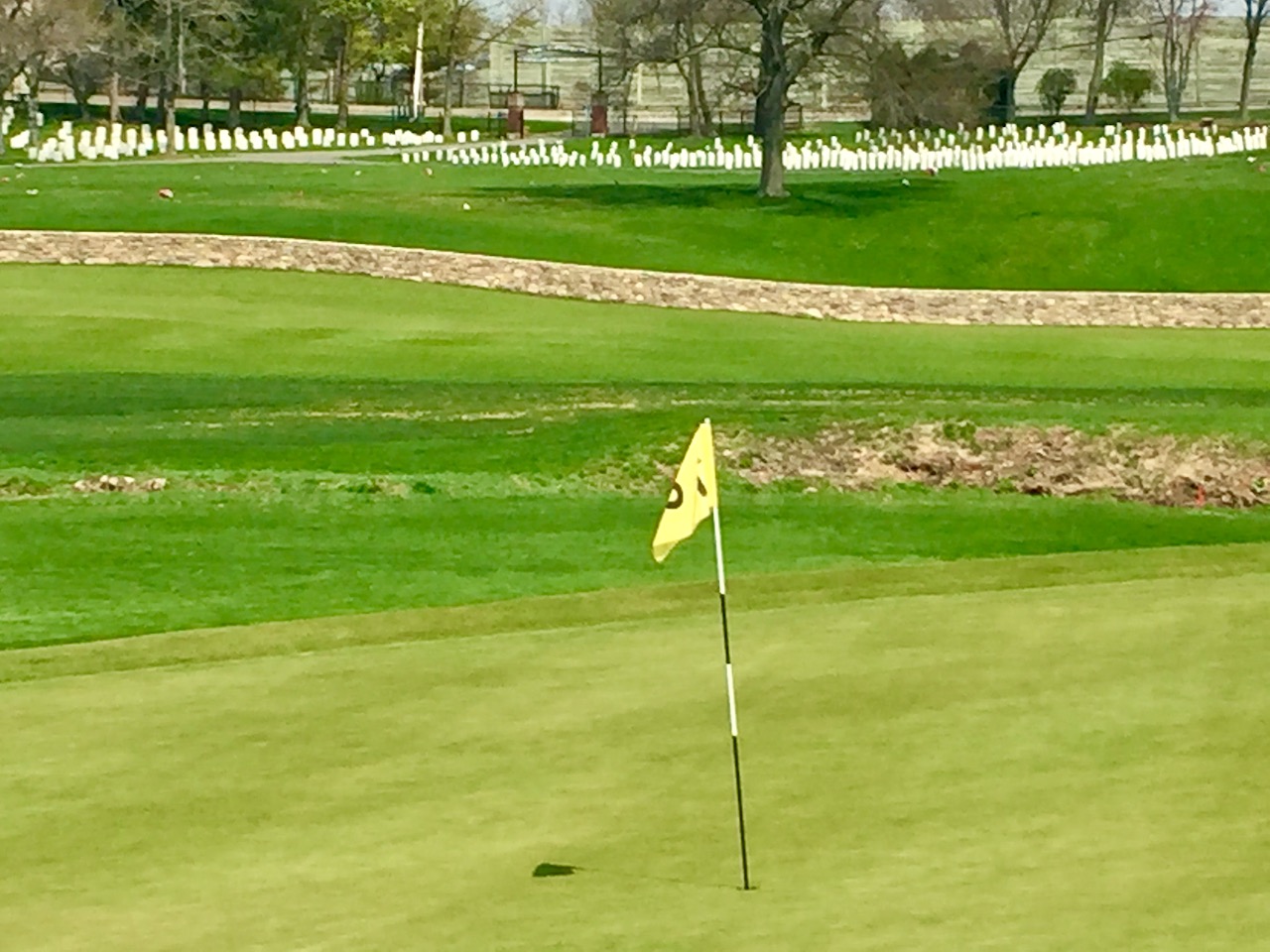 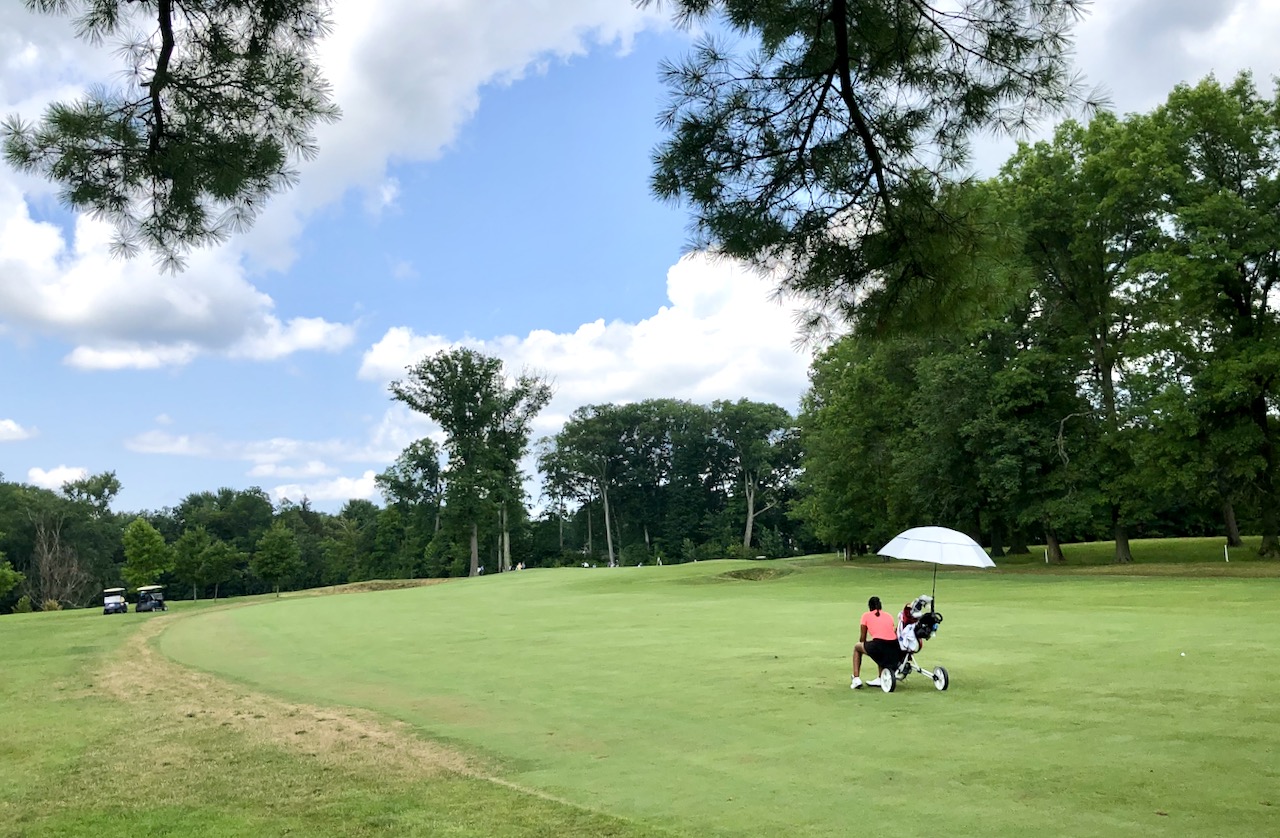 From the par 5 14th fairway during the National Girls Junior Championship. 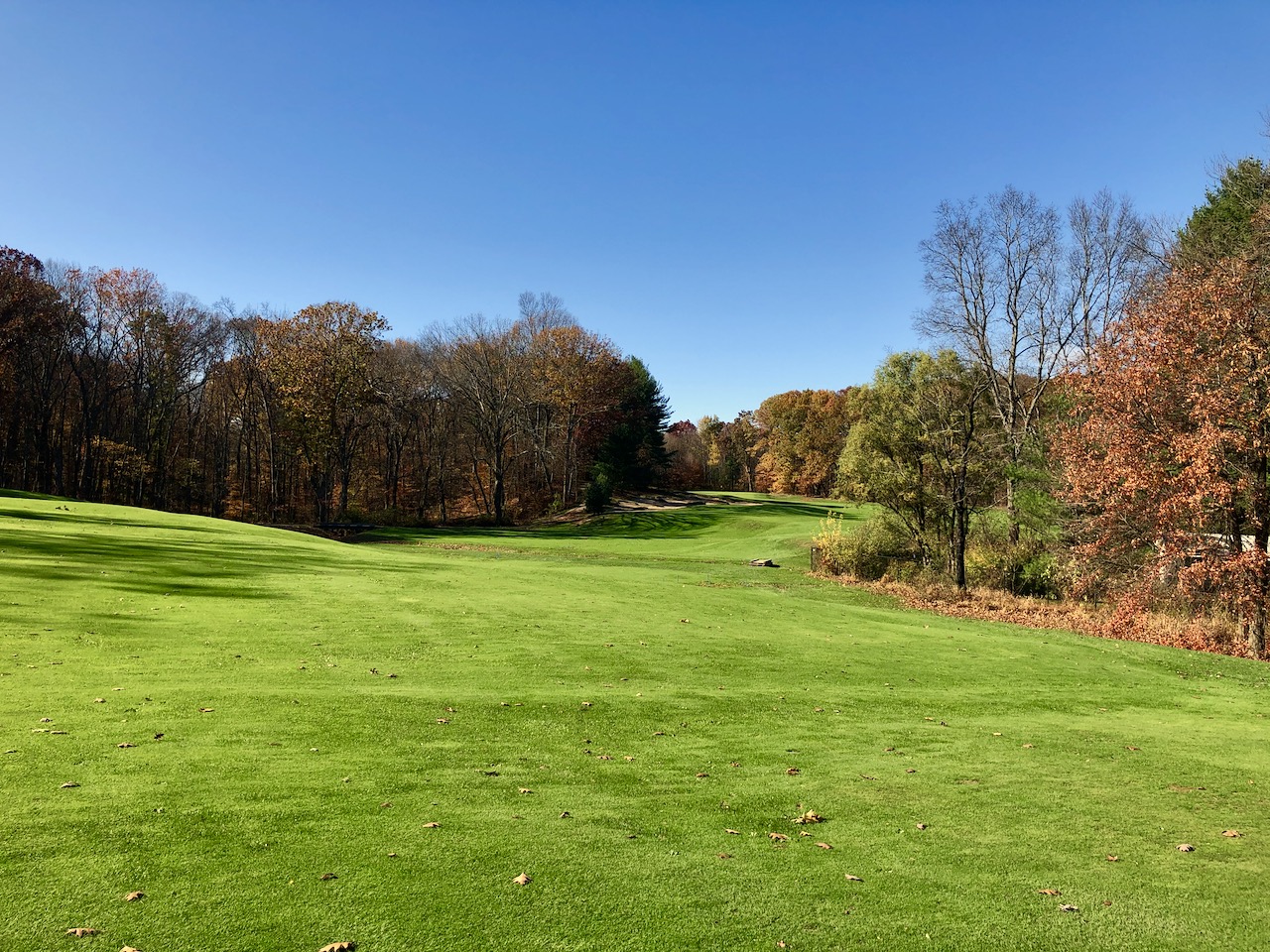 The stream on the par 5 2nd hole prevents all chance of making the green in two. 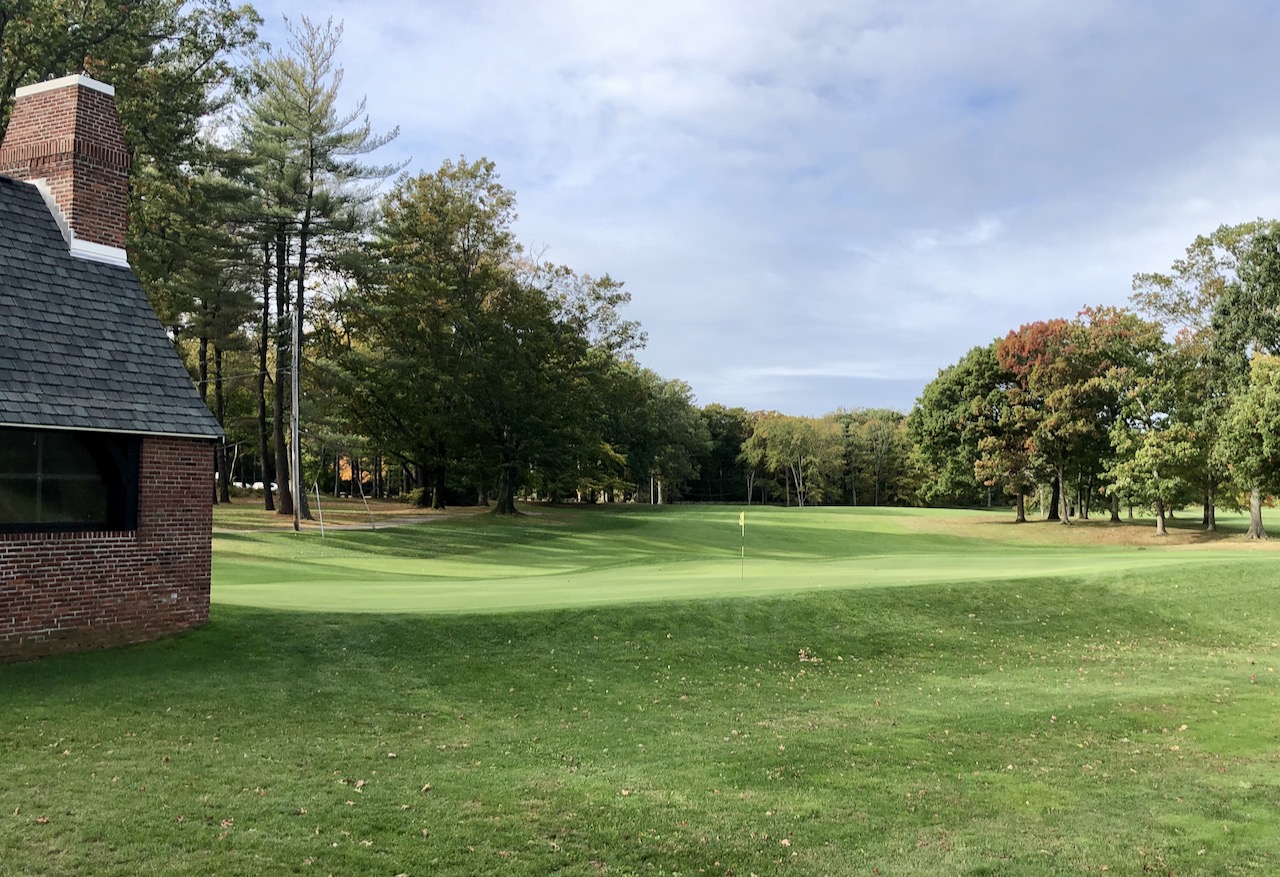 An approach shot beyond the back edge of the 9th green can bound back onto the green. 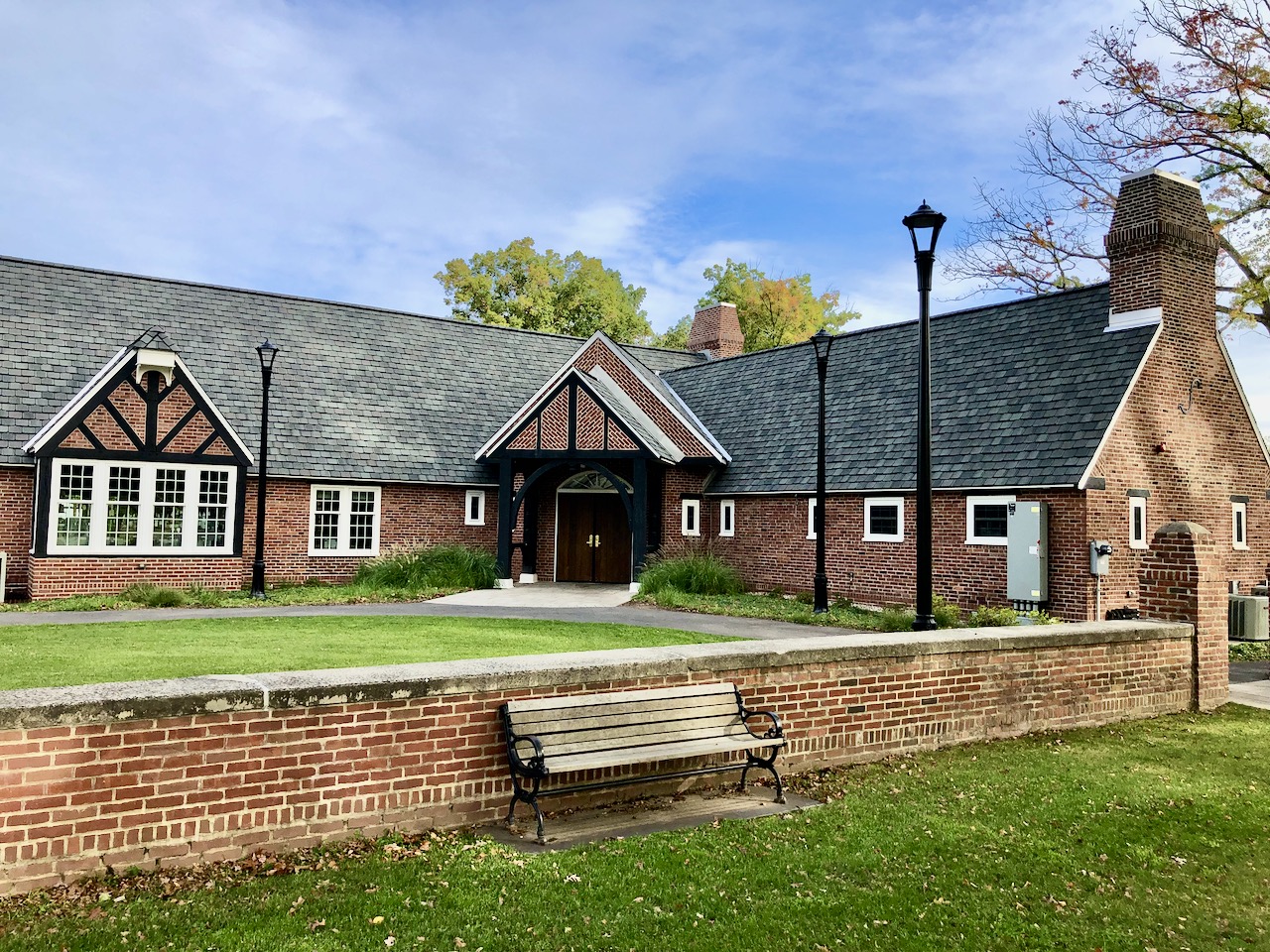 The Keney Park Clubhouse has been restored to its former (1934) glory and is a great place for a post-round meal and drink. 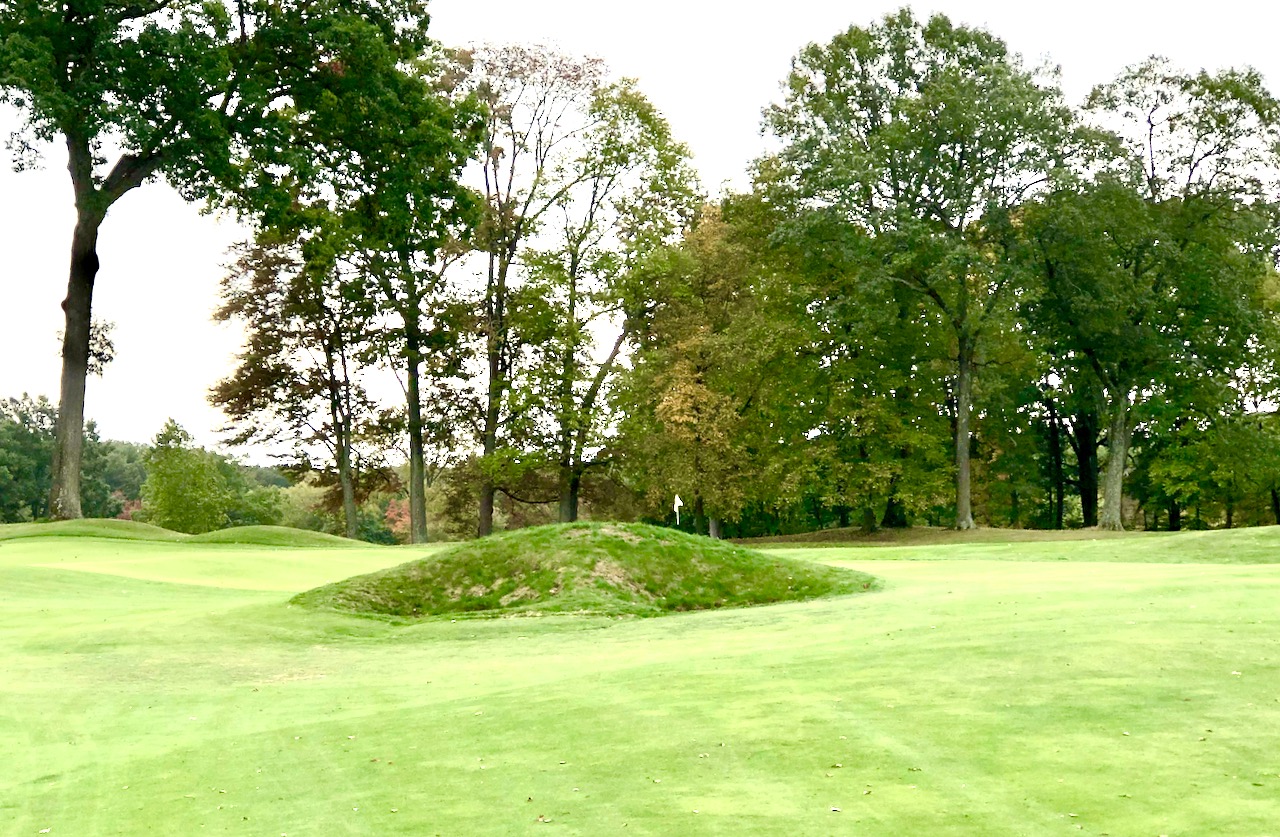 The Principal's Nose bunker renovation architect Matt Dusenberry borrowed from the Old Course at St. Andrews and inserted in front of the 17th green is nothing to sniff at. 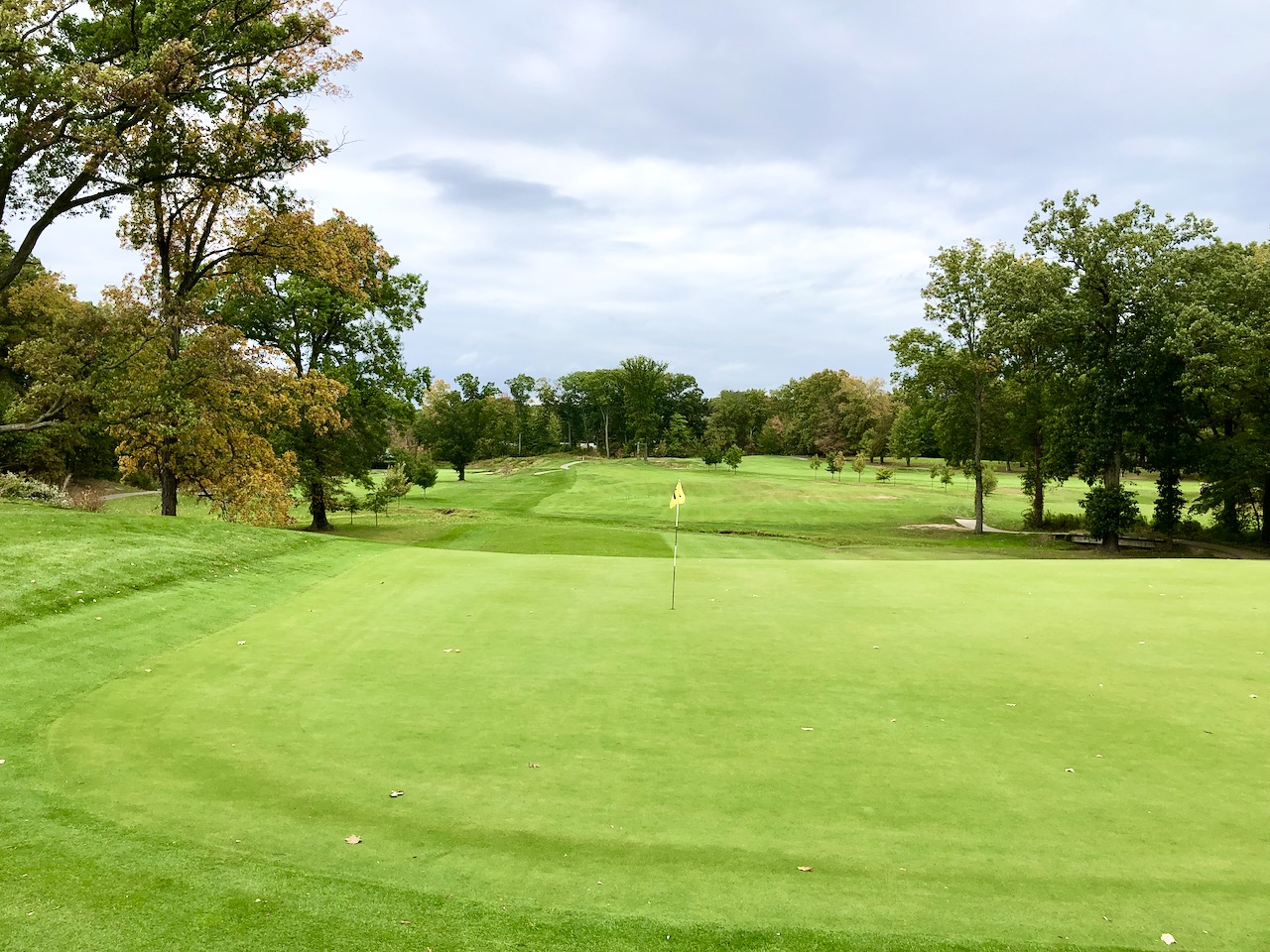 The 15th green is the most elevated on the golf course. 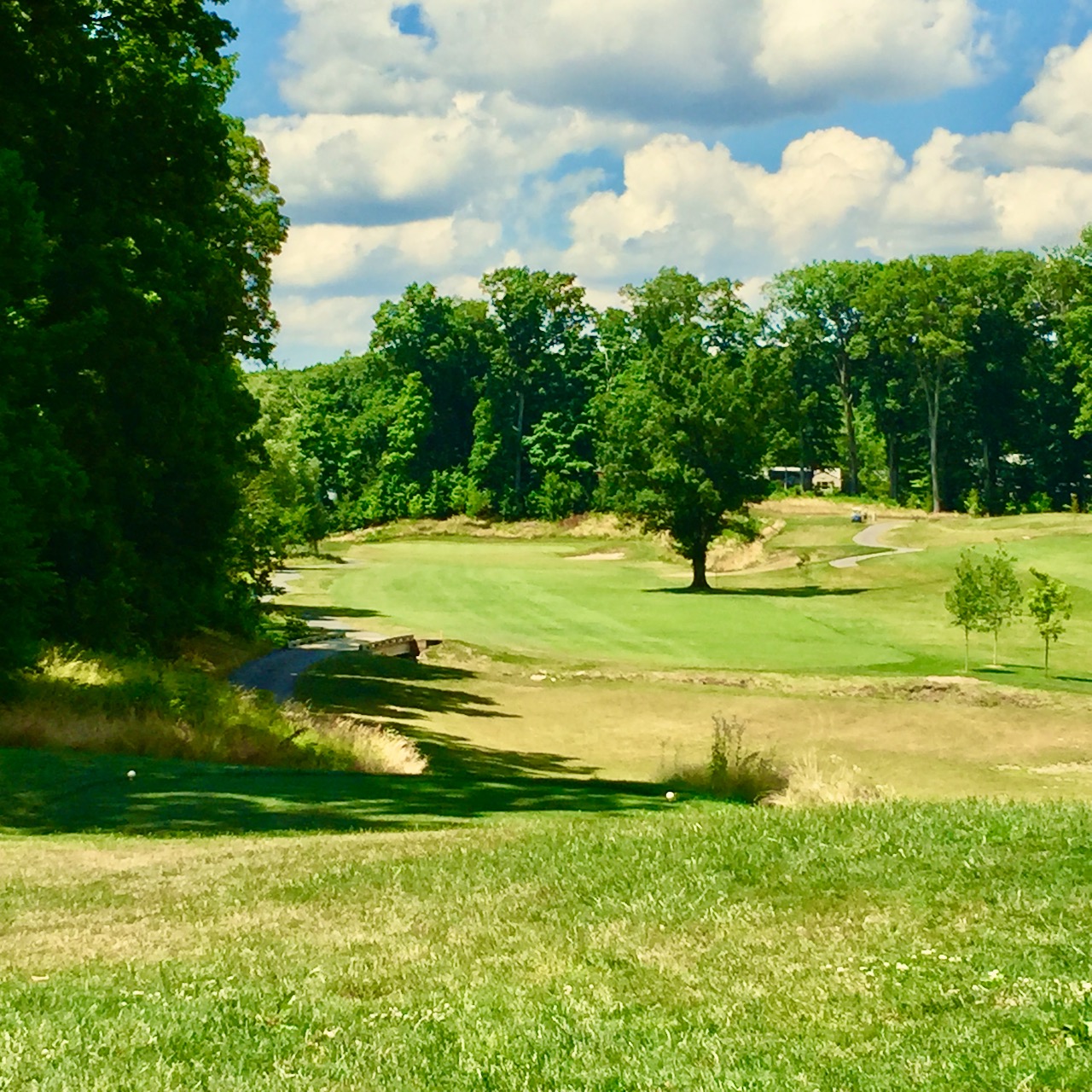 The drive from the elevated 16th tee is one of the most intimidating on the course. Avoid the stream beside the cart path to the left and you could wind up being blocked by the tree on the right. 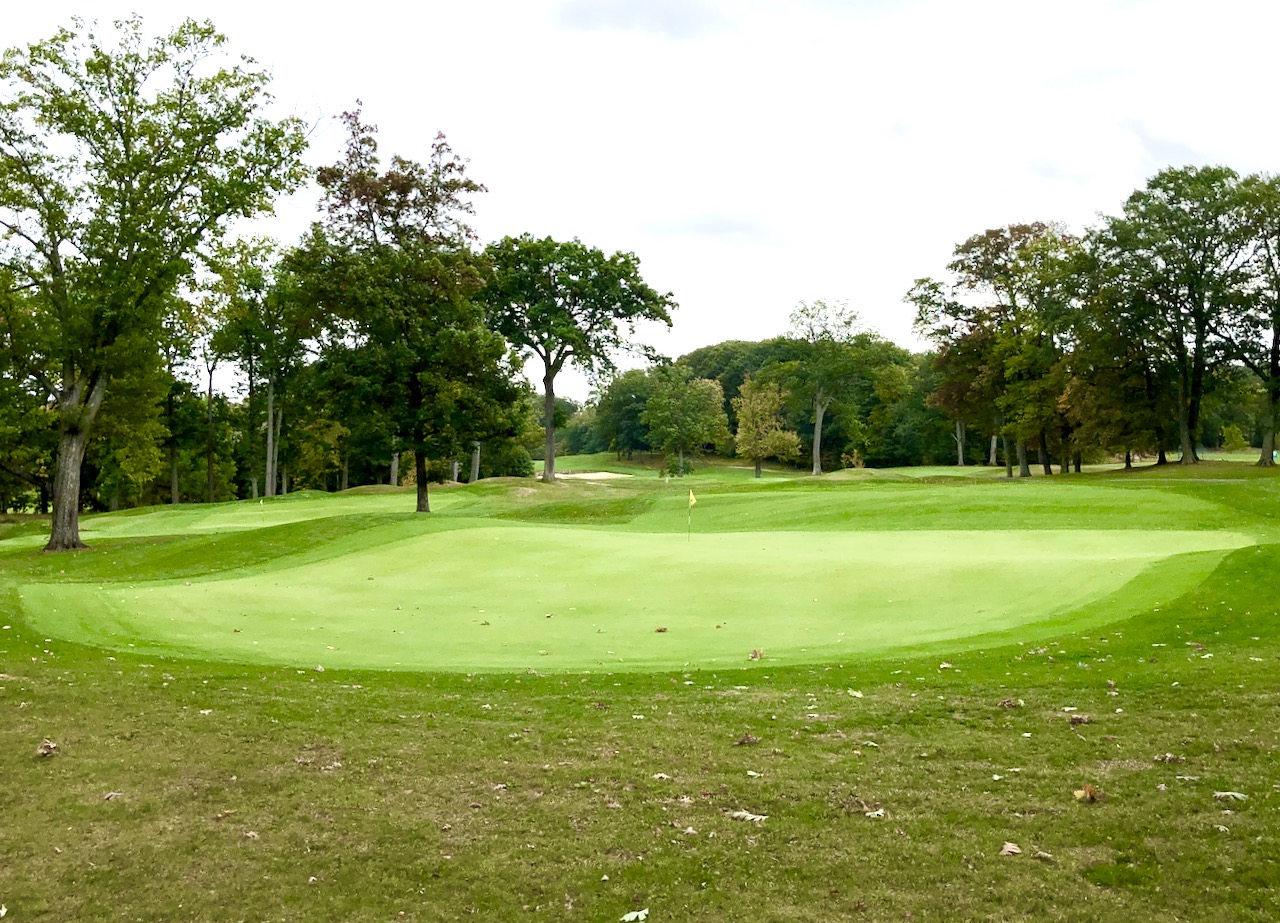 The round at Keney ends with a par three to a blind pin. You face a two club difference depending on whether the pin is at front or back on the deep green. 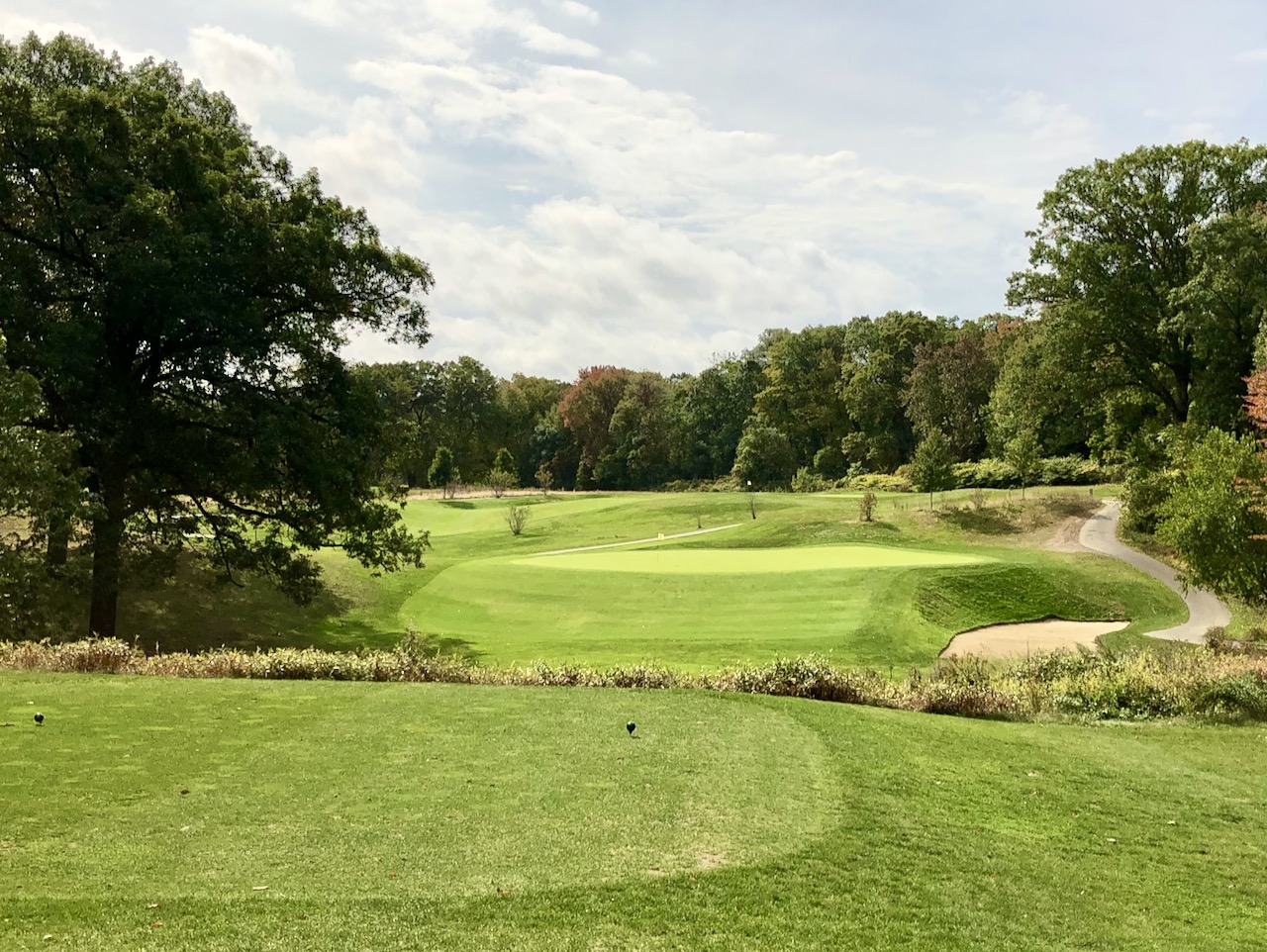 The par 3 3rd hole is arguably the easiest on the course, but with a steep slope in front and two bunkers at back, missing the green is a predictable bogey -- or worse. 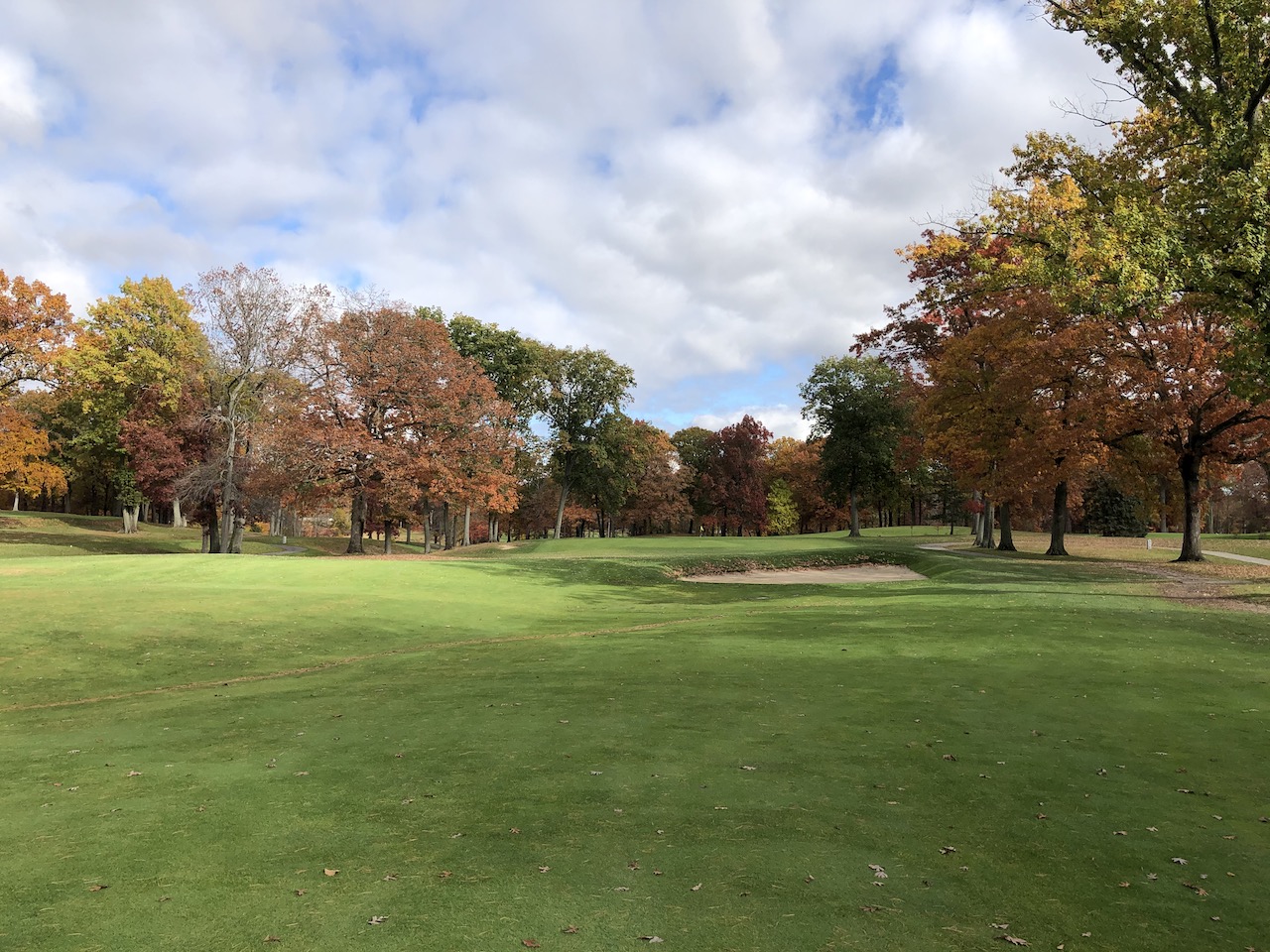 The 7th hole is straightforward par 4 -- until you get to the "Biarritz" green with its deep gully from front left to rear right.
Previous Next

Lost in the media’s fascination with the alleged death of golf are the stories of long-established golf courses that have undergone significant restoration and renovations. You might read about these in LINKS magazine, or Golf Digest or at GolfAdvisor.com, where golf architecture buffs care about such things; but the mainstream and business media tend to prefer the negative stories about golf’s future status. Keney Park, a municipal golf course on the extreme north end of Hartford, CT, opened in the late 19th Century when the city was arguably the wealthiest in America.

Located nearly a mile into a dense city forest, the Keney Park golf course opens up like a large sheep meadow, which is exactly what it was in its pre-park days. Famed early 20th Century golf architect Devereaux Emmet, a contemporary of Donald Ross and the other giants of the business, laid out all 18 holes, the first nine opening in 1927 and the second nine in the early stages of the Great Depression in 1930. The brick clubhouse, originally built as a public works project in 1934, was part of the restoration project six years ago that also brought Keney Park’s long-abused layout back to prominence. The comfortable tavern consumes the lion’s share of the building, sharing it with the tiny pro shop, and is a fine place for a post-game meal and libation. Outside are more than a dozen tables for fair weather dining and imbibing.

Emmet, who designed more than 150 golf courses worldwide, maintains a strong reputation in golf architecture circles and is responsible for the layouts at Congressional Country Club outside Washington, D.C., the Red Course at Bethpage State Park on Long Island, and Leatherstocking Golf Club in Cooperstown, NY. The designer was especially prolific in the Hartford area and is credited with Hartford Golf Club’s three nines and the layouts at Country Club of Farmington and Manchester Country Club. One of my favorite classic courses, Copake Country Club, just over the Connecticut border in New York State, is also an Emmet design.

In the 1970s, Keney Park fell into disuse despite its pedigree and beautiful grounds, as Hartford itself became one of the poorer cities in the nation. The park’s secluded areas, once considered a lure for visitors, scared many people away because of the possibility of criminal activity. The area’s residents, with the strong support of Hartford’s police department, rallied to Keney’s defense, and by the mid 1990s, things were looking up for the park. Nevertheless, conditions on Keney’s golf course had deteriorated after the turn of this century, and the nail in the coffin was the hiring of a company whose management of the club, if not criminal, as some alleged, was certainly inept. Trees and fallen limbs littered the golf course, and the old line about a “cow pasture” would not have been an inappropriate description of the fairways and greens.

Thankfully, city officials were shocked enough at the conditions to fire the management company in charge of the club and authorize the $5.8 million needed to restore the golf course to most of Emmet’s original specifications. Construction began in 2013 and the course reopened in April 2015, albeit with the pro shop located in a trailer and no potable water available on the golf course. Golfers didn’t seem to care about the temporary lack of amenities; friends and I played it that first year, and all of us believed it to be the equal of most private courses in the area and as good as any public layout in the state. It has only gotten better since.

When my friend Bill played Keney for the first time a couple of year ago, he pronounced the greens as good as those at his private course in Simsbury, CT, Hop Meadow Country Club, one of the best layouts in the northern half of the state. (I was a member there for 25 years.) I don’t recall playing a public course’s greens that are any faster than Keney’s on its speediest day; the state PGA Championship used the course over two days that first year.

Although the course ratings and slopes at Keney are rather timid –- just 70.6 and 127 from the back tees at just 6,449 yards –- it plays much tougher when the greens are at their fastest and firmest. Further, some of the greens feature huge sloping areas, most notably at the par 4 7th hole, called “Biarritz,” where the pin was on the top level. (Biarritz is a design element that features two dramatically different levels that are bisected by a gully that runs its entire length or width.) Emmet seems to have channeled other iconic elements of golf architecture, including a church-pew grouping of bunkers beside the par 4 8th hole, called Hogs Back, which are certainly reminiscent of the more famous pews at Oakmont. Other bunkering is equally dramatic, as on the par 5 10th hole, where a second shot must either be busted over an almost fairway wide bunker containing a few menacing grass buttons, or played short of the bunker, leaving a 130-yard uphill approach to the forward tilting green. Strategic thinking abounds across the entire 18 holes at Keney Park, although I find the par 3s, with one exception, a little less intimidating than the longer holes. Yet, on the downhill, 127-yard 6th hole, aptly named “Short,” a huge swale front and center on the green shields the bottom two thirds of the pin from view; it isn’t until you reach the green that you find out where your shot had ended up. A shot landing at the back edge of the swale could easily bound off the back of the green or stick and roll back toward the hole. A shot that winds up on the wrong side of the swale, with the pin as much as a 50-foot roller coaster ride away, is in 4-putt territory. If there is one flaw in the layout, it is at the par 5 2nd hole which plays to 491 yards from the Blue tees. Moderately long hitters will leave driver in their bags and opt for a 5-wood or long iron. Fans of par 5s that provide a chance at an eagle chip or putt will be disappointed, as the stream that crosses the fairway about 230 yards from the tee will leave little chance of that, given the long uphill second shot. That, and a few off-fairway areas that are sparsely grassed, are minor quibbles with a golf course that is about as much fun to play as any in the northeast.

And green fees are a bargain, especially if you are a Hartford resident ($27 weekday, $28 weekend) or a non-resident “senior” ($27/$38; the course’s website doesn’t specify what age constitutes senior but I did not get carded). Other non-residents pay just $37 on weekdays, $38 on the weekend. With just a few hills, all of them gradual, the course is easily walked if you want to skip the modest cart fees and get some exercise.

* Footnote: Keney began as a private park on farmland owned by a never-married wealthy local businessman, Henry Keney, whose cousin encouraged him to leave his name on something that would endure. His will provided not only the land but also funds for the park, laid out and landscaped in the 1890s by the famous Frederick Law Olmstead’s company. (Olmstead was a Hartford native.) The park and the golf course were immensely popular, first with wealthy north Hartford residents in the early 20th Century and later by a more diverse population of mostly Jewish and African-American citizens. In later years, many of the area’s white residents left for the suburbs; most of Keney’s neighbors today are persons of color, many of them immigrants.

As Rated by Reviewer: Outstanding