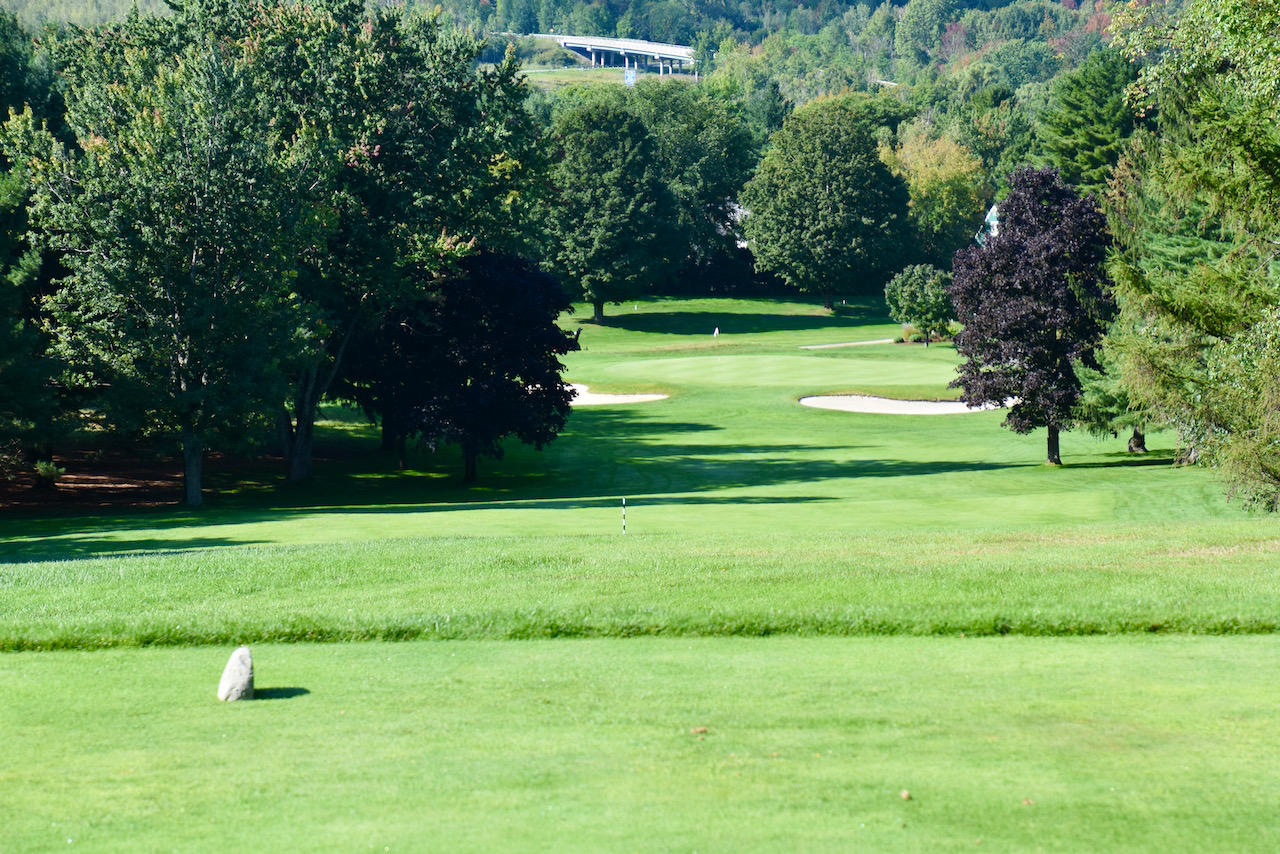 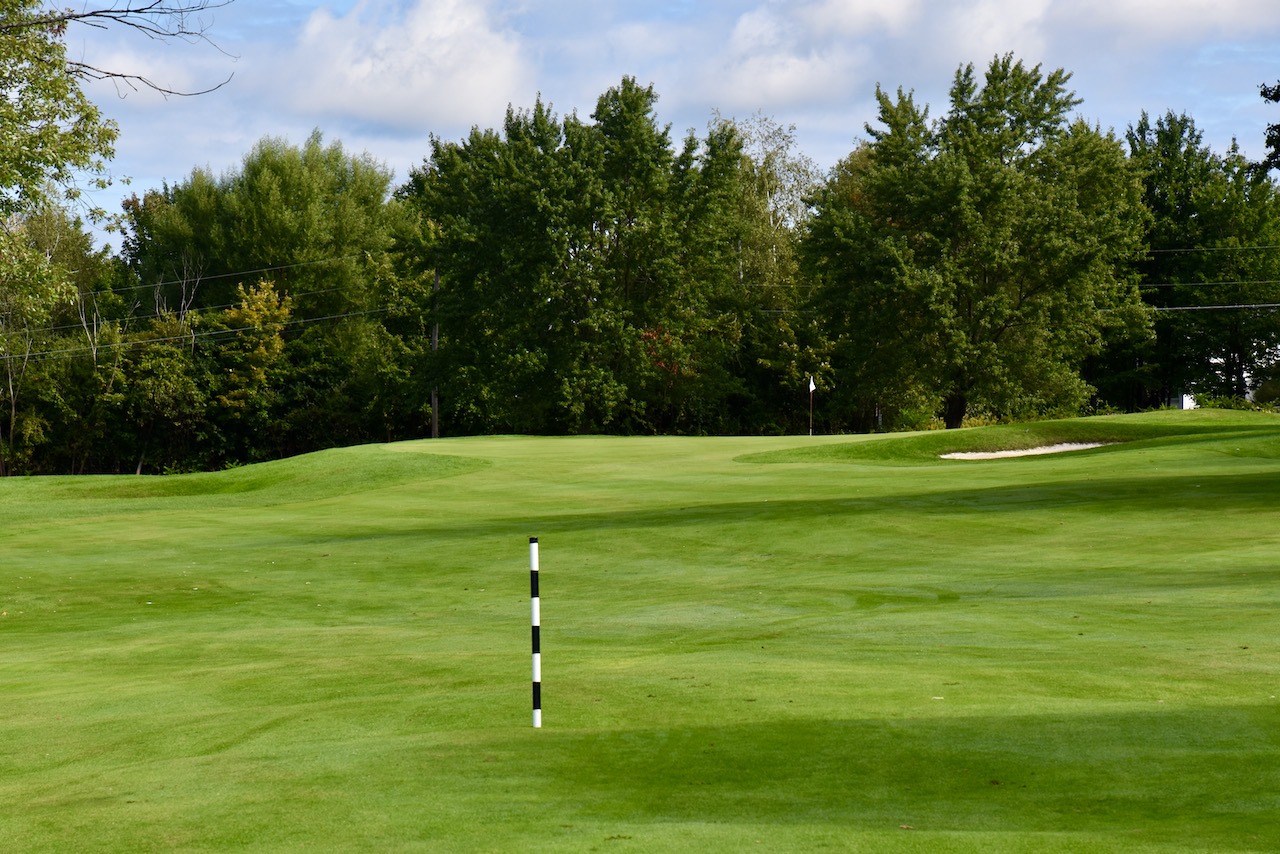 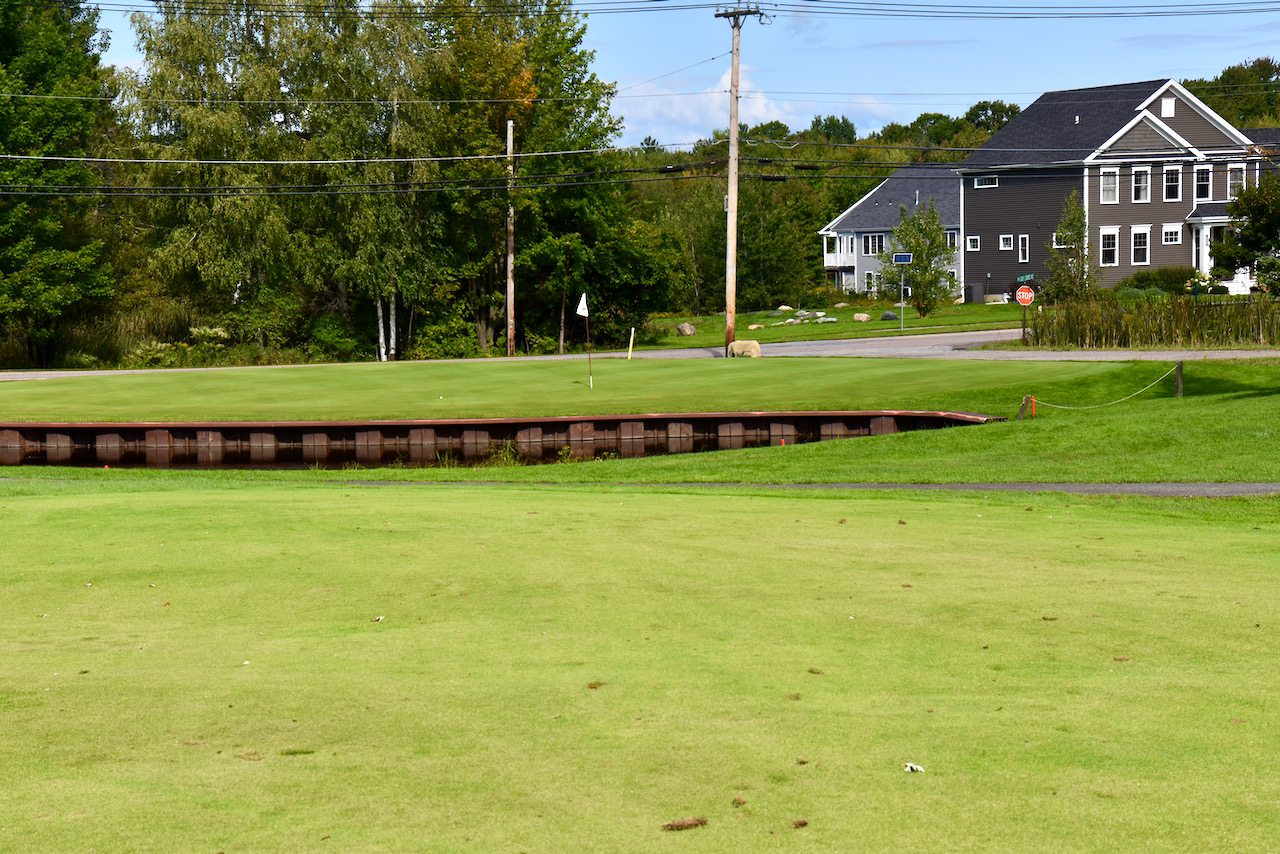 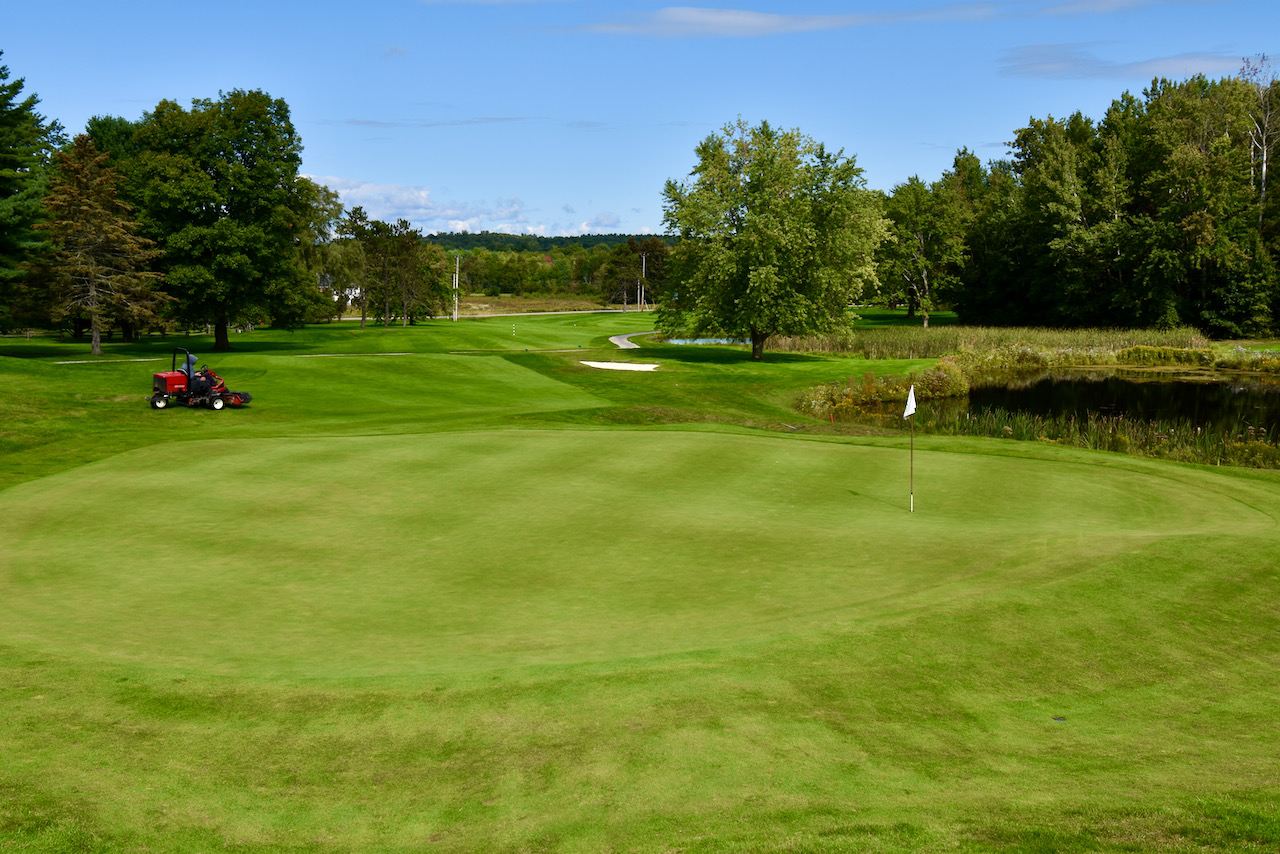 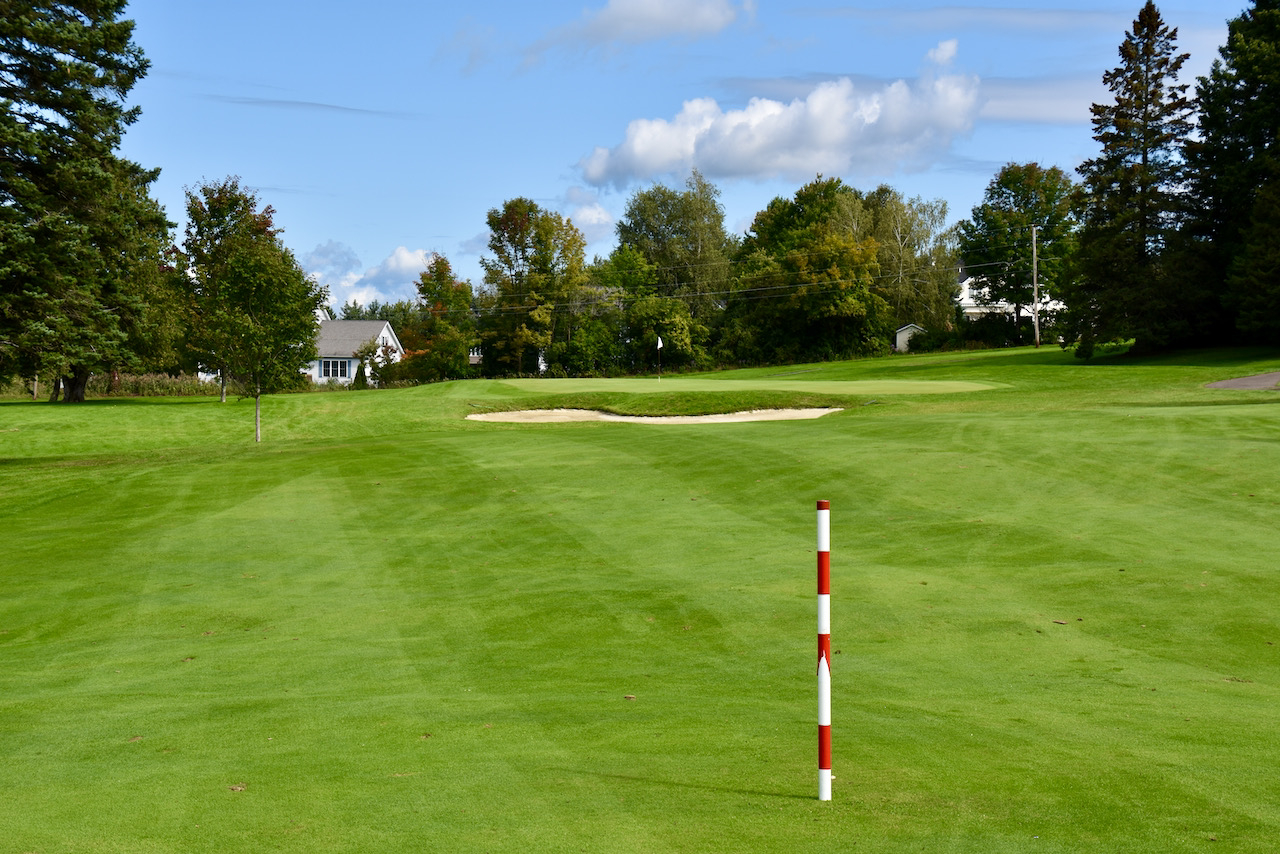 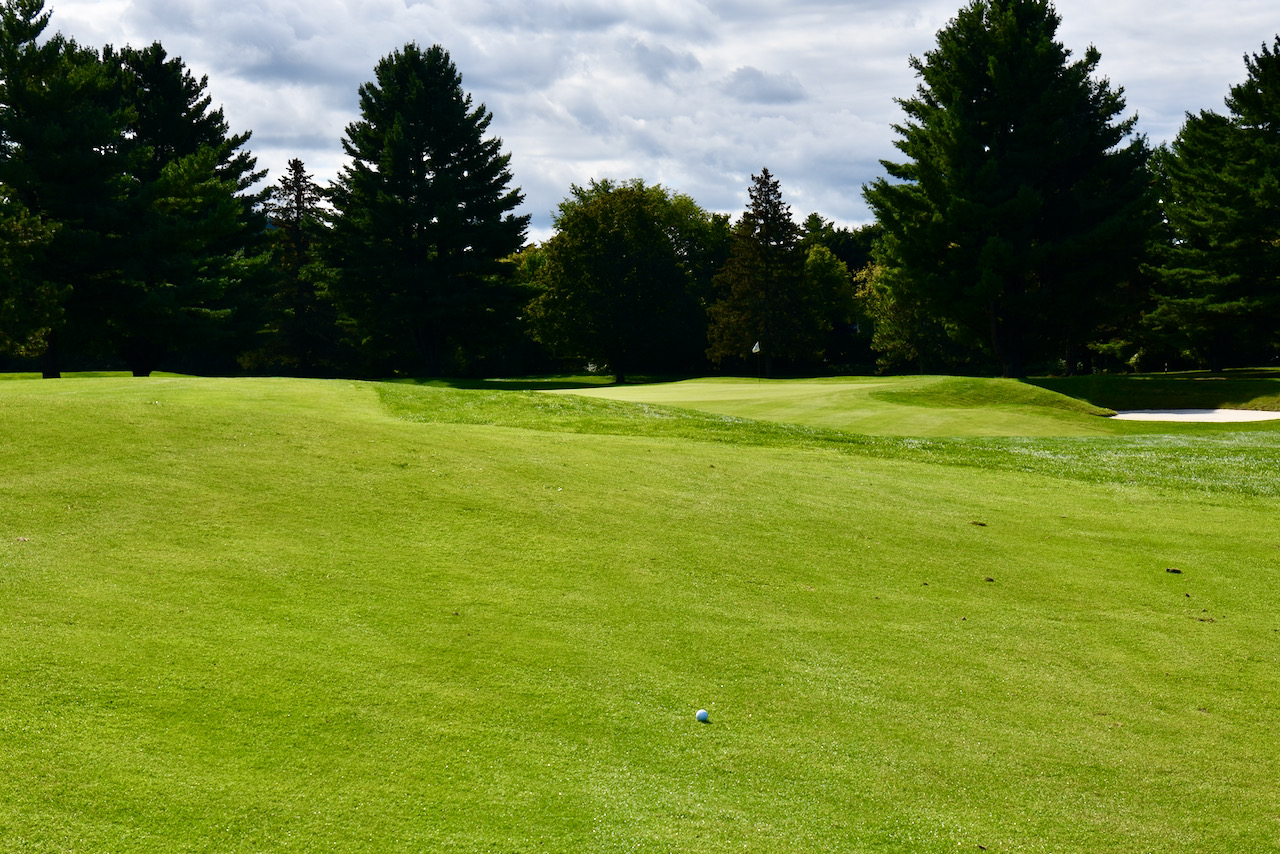 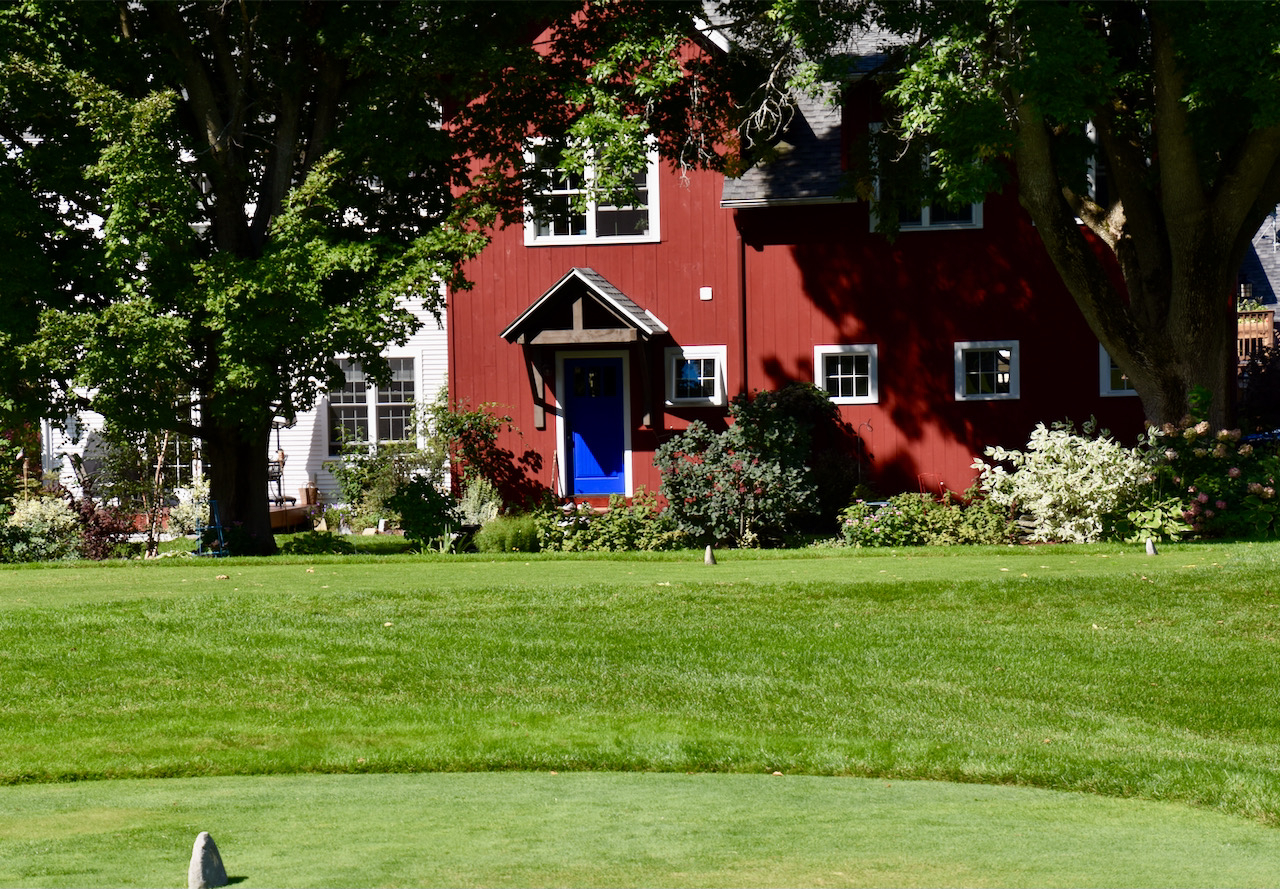 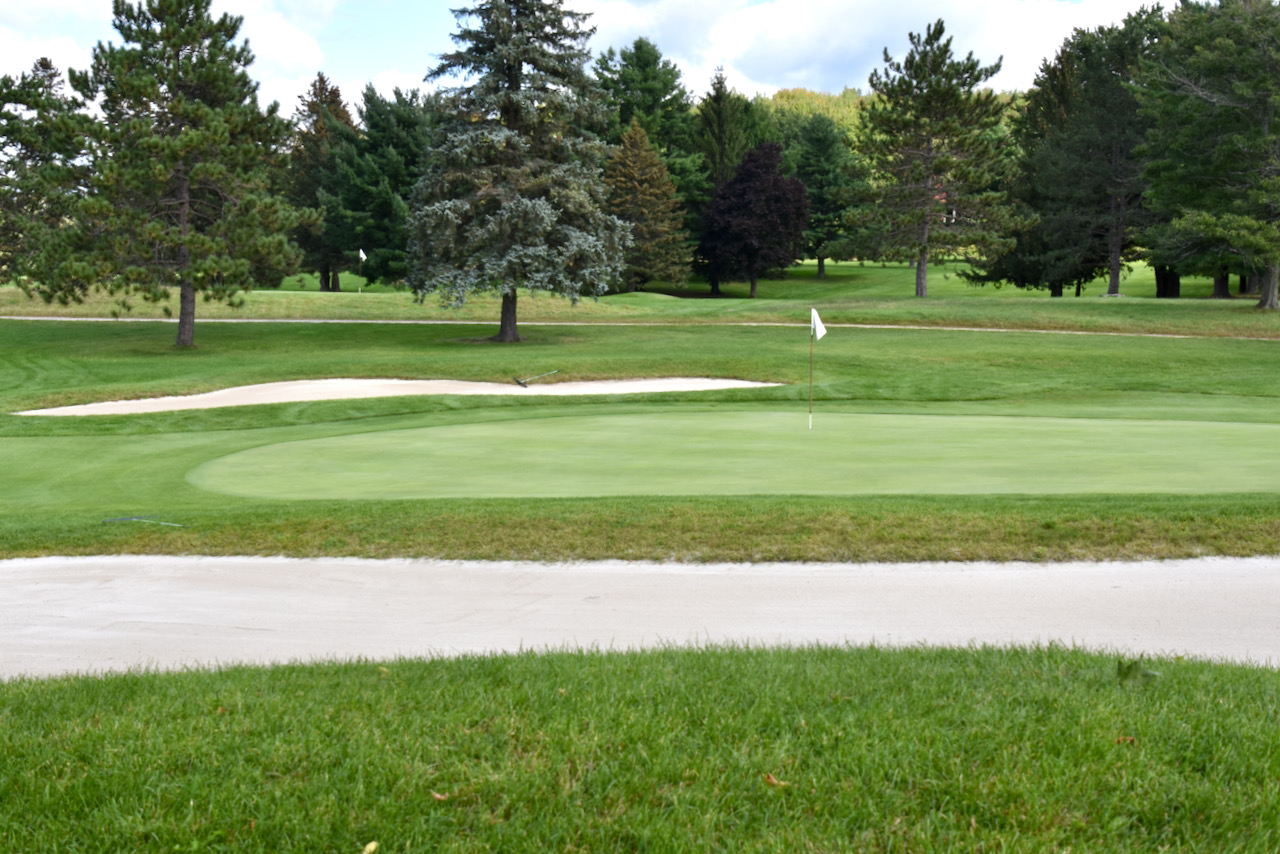 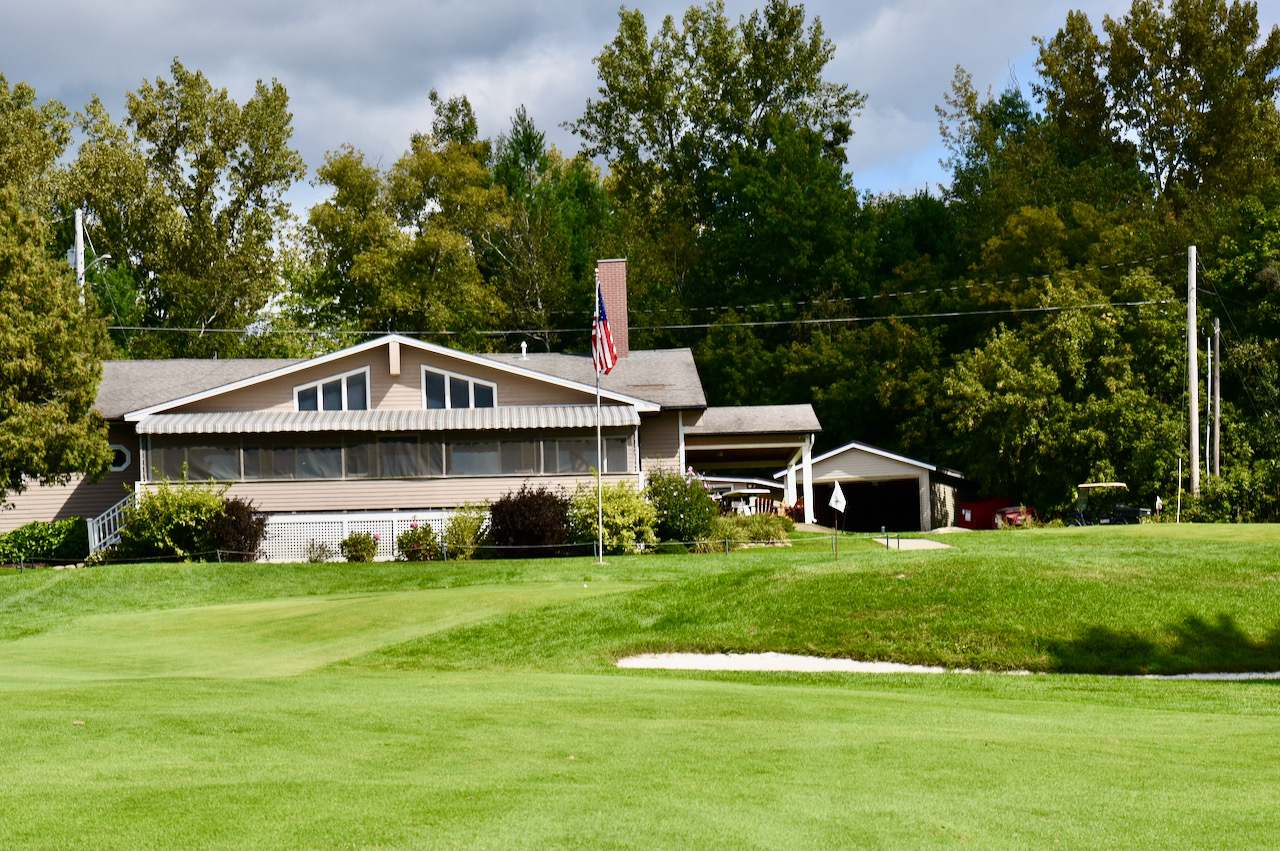 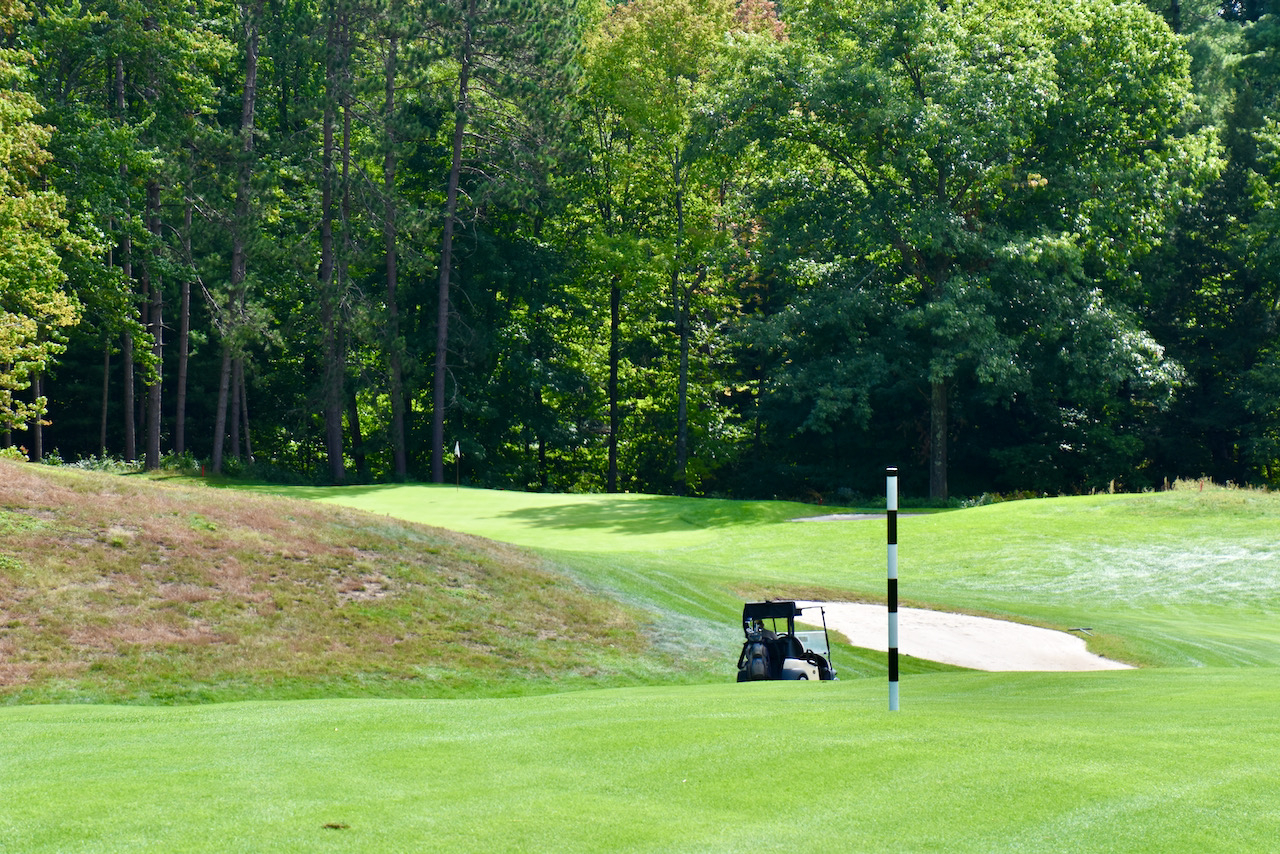 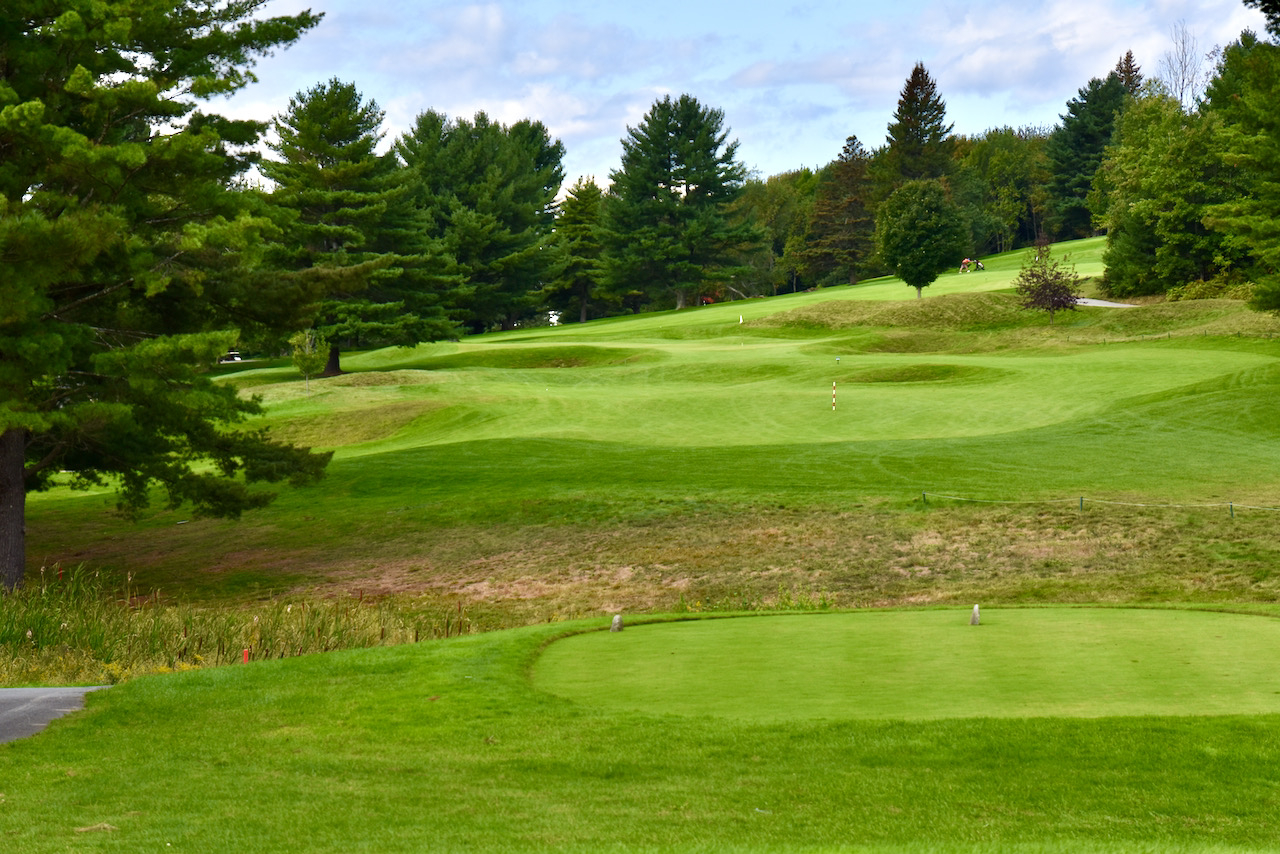 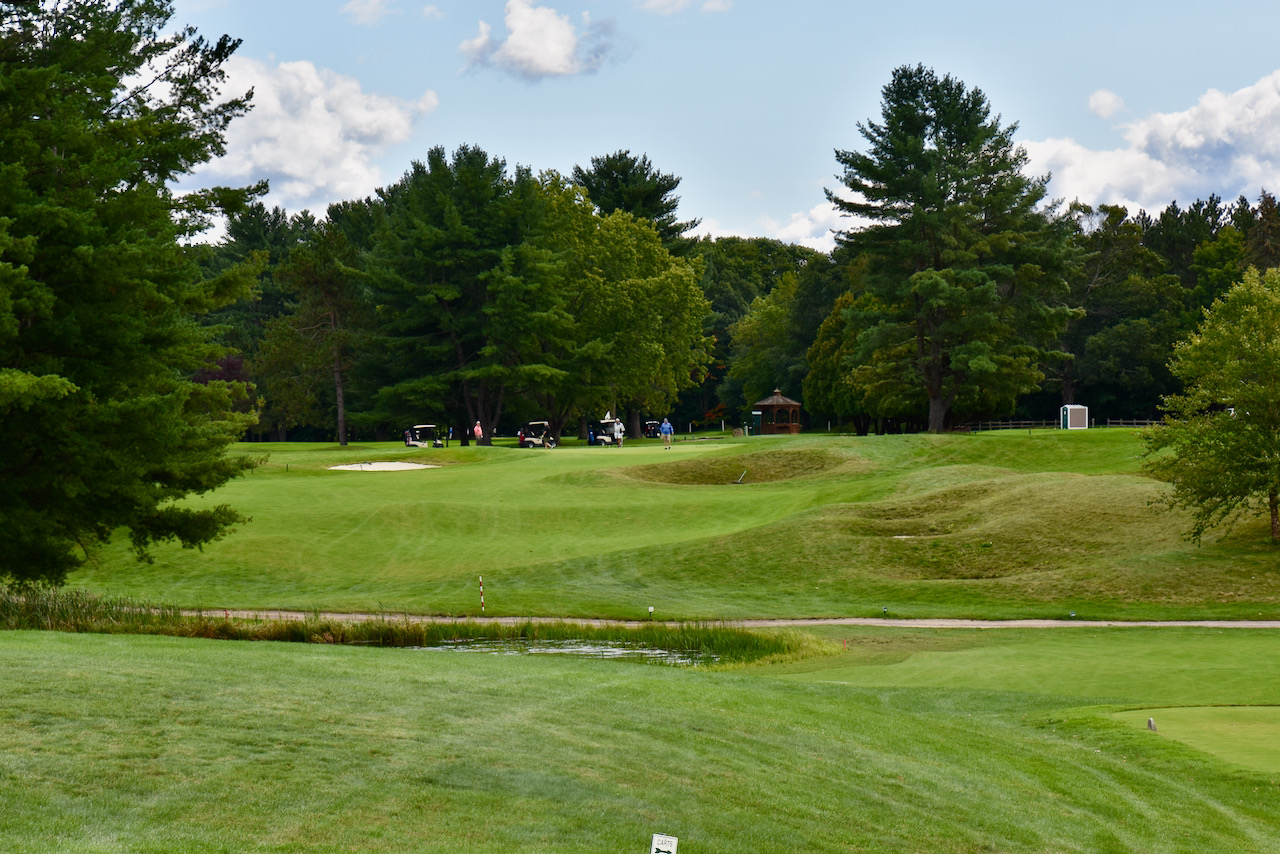 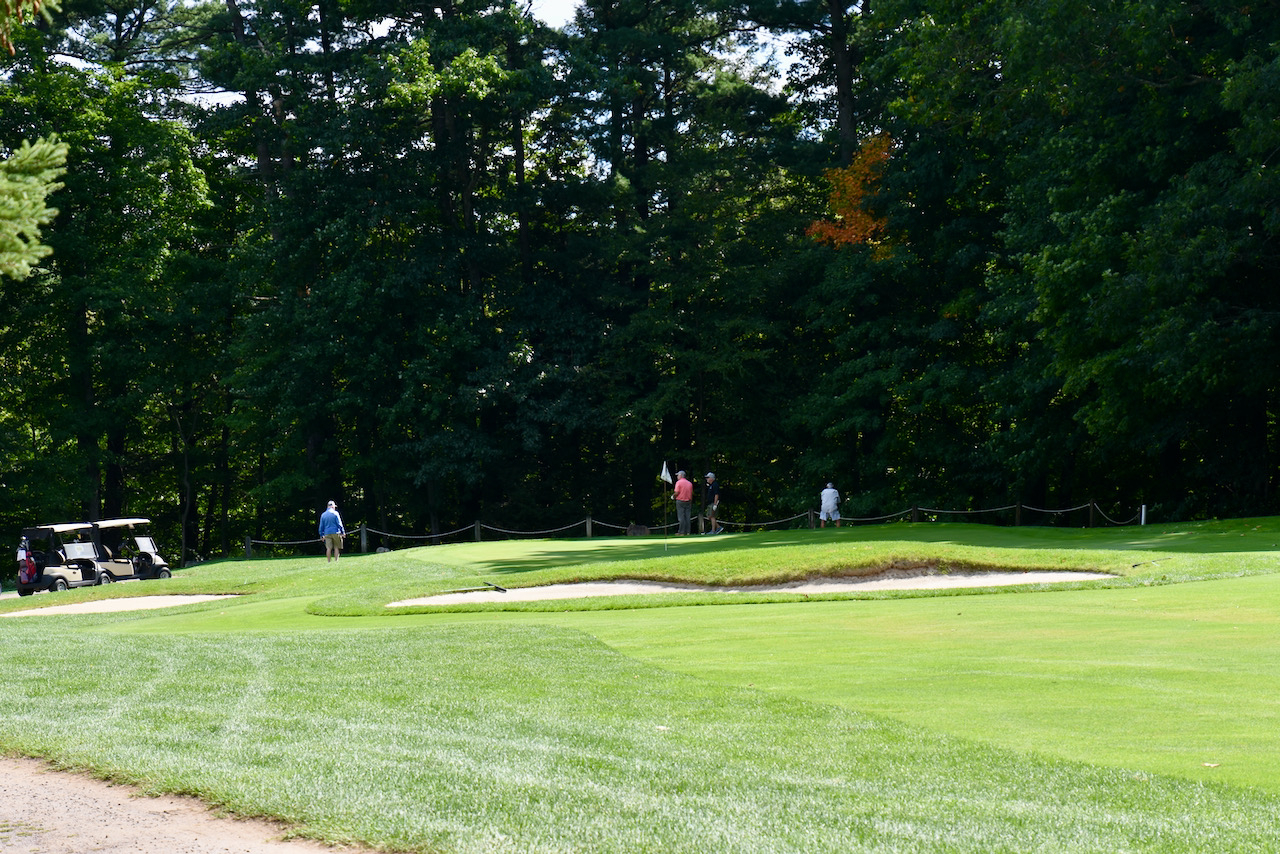 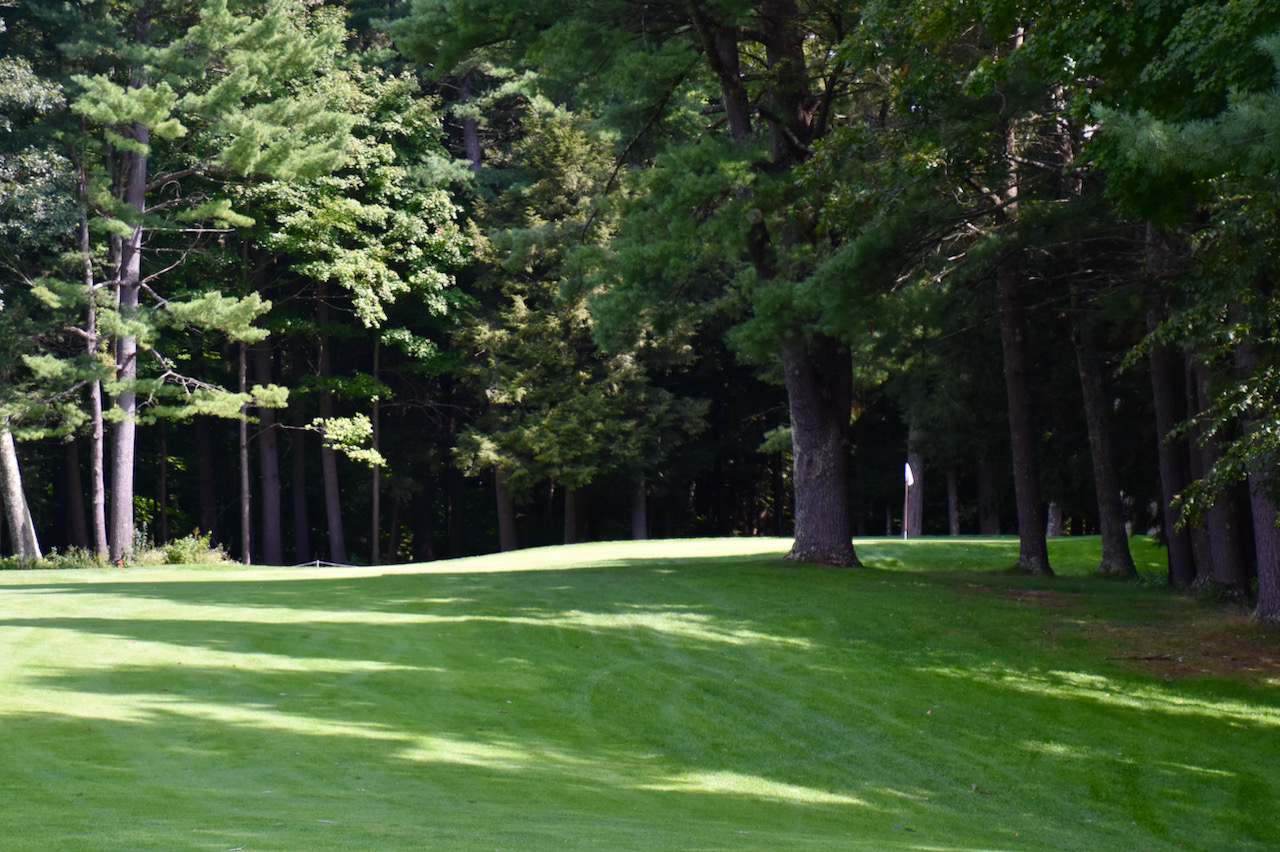 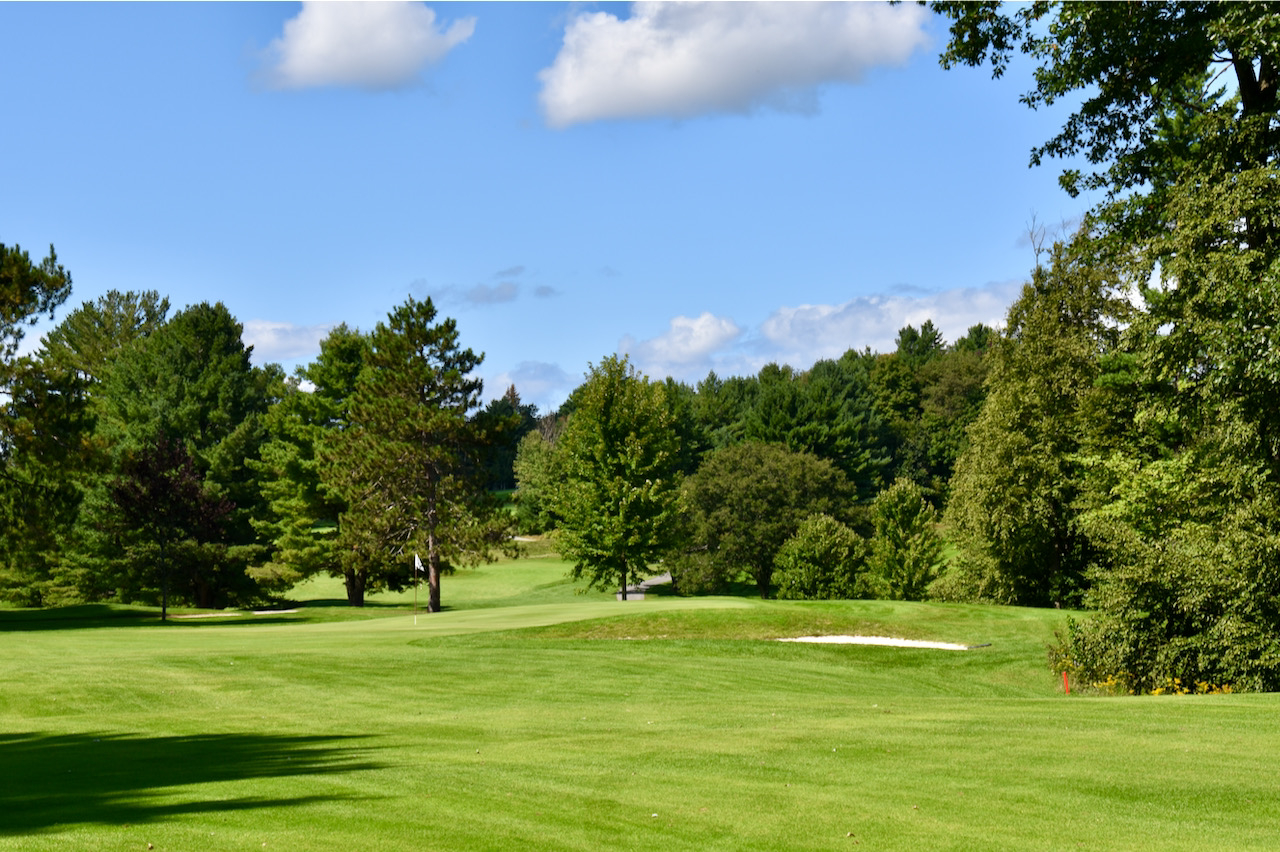 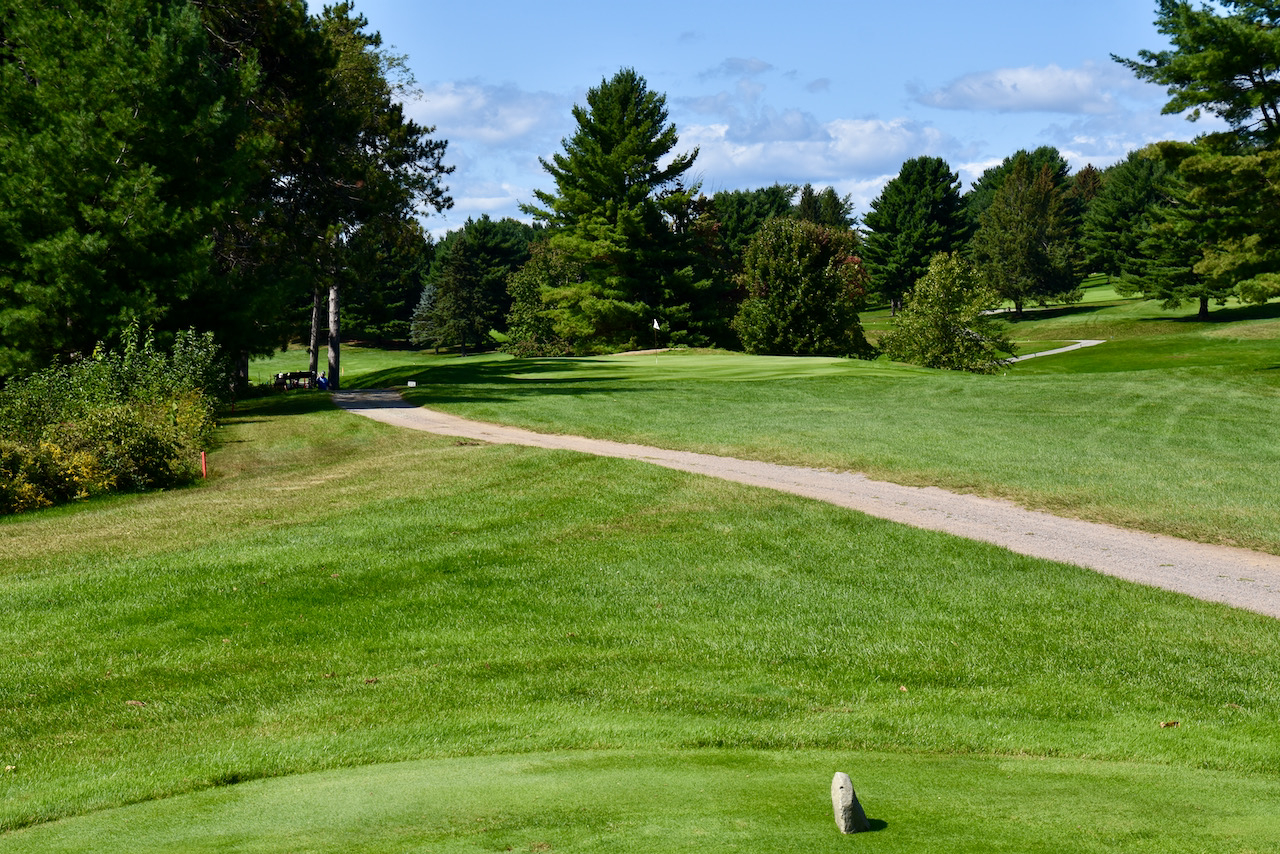 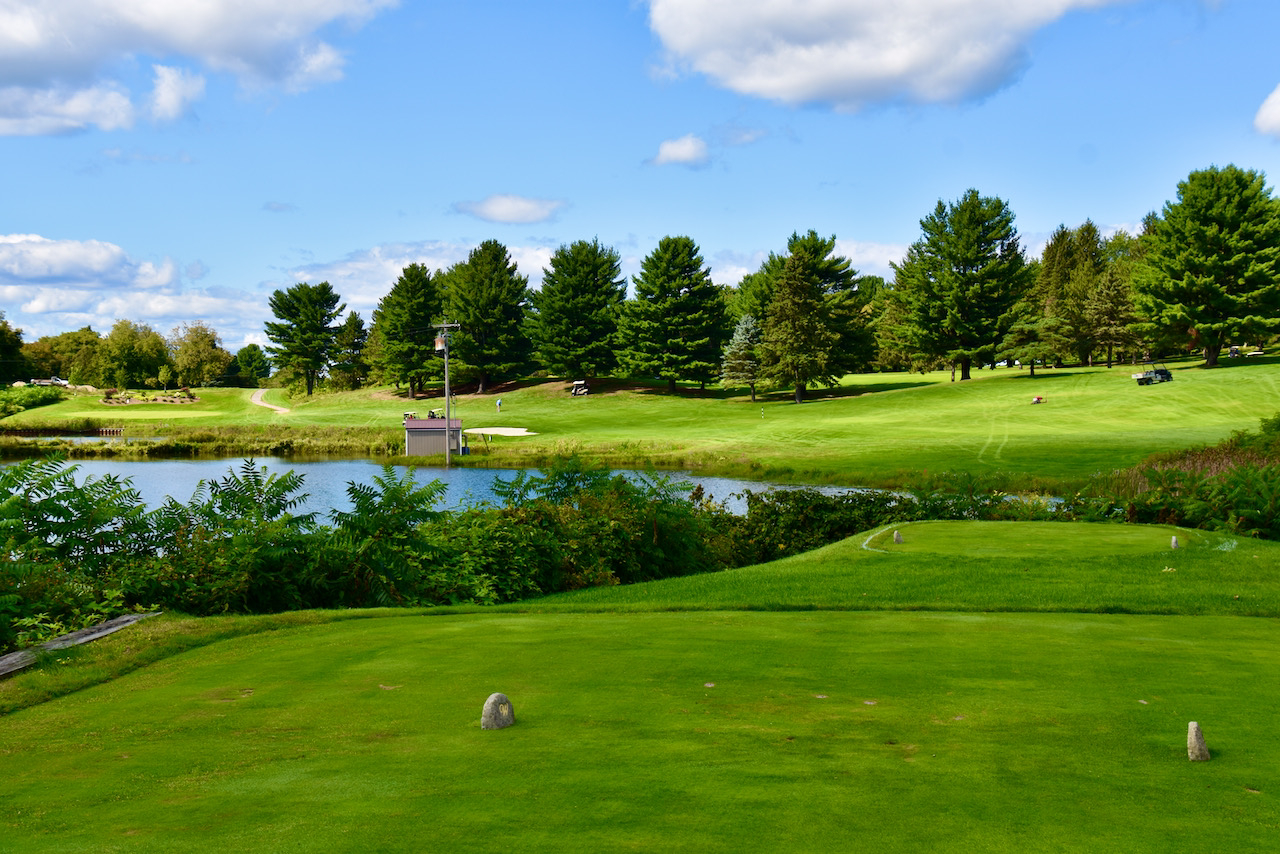 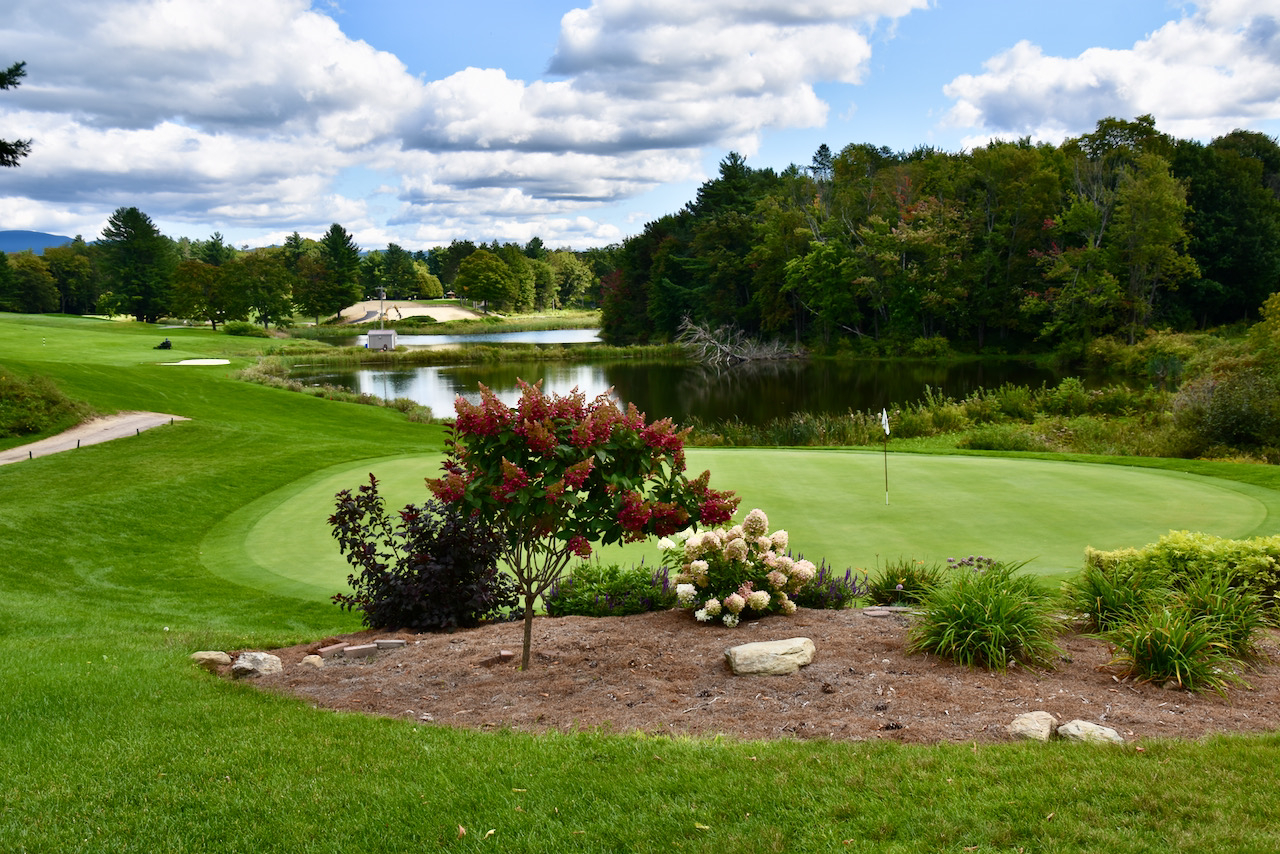 Williston 17th hole from behind green 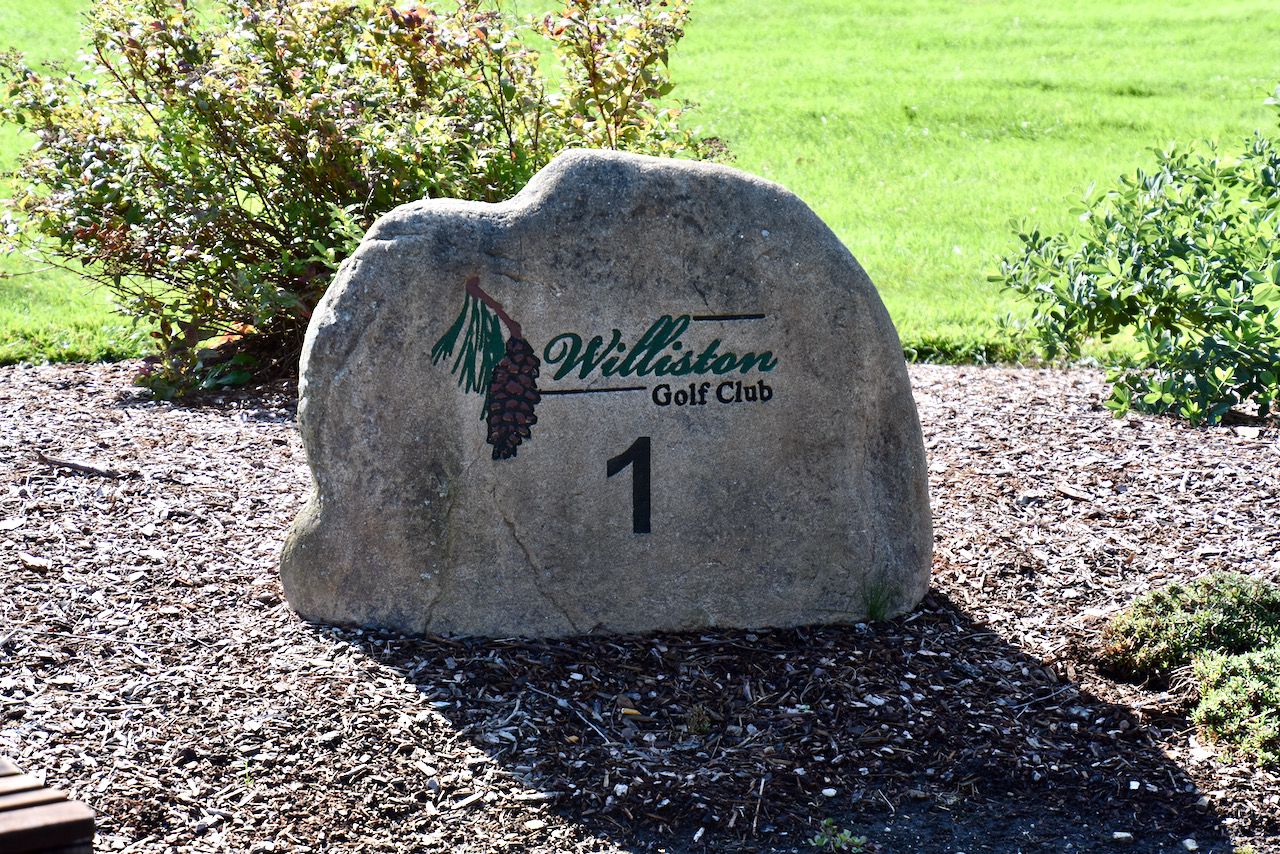 Welcome to Williston
Previous Next

Williston Golf Club presents an interesting layout with an even more interesting history. Designed and built in 1927 by a local farmer, the club passed first to his son, who operated it into the 1960s, then to his granddaughter and her husband, an avid golfer who redesigned the course and added a second nine holes in the late 1960s. Today, the course is run by the original owner’s two grandsons who are making significant changes to solidify the course’s future.

This was in evidence even before my round started when, from the practice putting green behind the clubhouse, I noted a large earth digger 50 yards away, just to the right of what I surmised was the 18th green. I learned at the end of the round that the earth digger and a bulldozer were in the early stages of building a new 18th green, shortening the closing par 5 slightly and necessitating use of a temporary green that was well short of the existing 18th green. Out on the course, new tee boxes were almost ready for seeding on the 17th hole. Williston has firmly established itself as a quality public facility and yet the current owner is burnishing the remaining few rough edges. I asked my playing partner, a member of the club, and the head pro if all the activity implied a desire to turn the club private; both were assertive in their negative responses.

Public or private, Williston’s condition was a pleasant surprise, one of the eight dozen I have played on or near Lake Champlain in Vermont and New York where I felt especially comfortable playing the ball as it lay in the fairways. The only marks I encountered on those fairways were unreplaced divots; thankfully I did not have to hit from one of them (or roll the ball over). The tee boxes as well are in nice shape; tees entered the turf easily, and I never saw a bare spot or one that was poorly mown on any teeing areas.

With one man-made exception, the greens were outstanding, smooth and as fast as any in the area (although the practice green was noticeably faster than those on the course). The only problem with the greens were the troglodytes who failed to fix their ball marks, especially on those shorter holes that invited wedge-shot approaches. Most of the greens were pockmarked with pitch marks either poorly fixed or not fixed at all. I fixed an average three per hole, but there were more that needed work.

Williston’s course is the work of multi-generational non-professional designers, but in no way does it seem amateurish. Bunkering, while standard in shape and size, seemed to be in the right places to both frame the fairways and gobble up slightly wayward shots. The greenside bunkers are close enough to the putting surfaces to force better players to make accurate approaches over or around them. Some of the holes play from significantly elevated tees, and others play uphill to elevated greens. A couple of the longer holes, including the 18th, force a fairway metal up steep hills to within a wedge shot of the green (assuming a well-struck fairway metal). There are some ponds on the course, but I never encountered one that prompted me to deviate from my plans to hit the ball straight at the 150-yard (or 100-yard) pole. It is smart and helpful of Williston to place 100-yard markers in the fairways on the shorter par 4s rather than the mostly useless 150 markers most clubs employ; those wind up 40 or 50 yards behind your tee shot and are much less helpful to those of us who don’t use rangefinders (or those whose batteries have died in their rangefinders, as mine did). Williston should be applauded for breaking the 150-yard marker barrier on short par 4s.

The 9th hole is the only par 5 on the par 36 front nine – just one par 3 as well – and is relatively short at 420 yards from the Gold tees that I played (5,400 total yards); but the second shot is straight uphill toward a green that is totally hidden from view. Helpfully, the American flag beside the clubhouse stands directly behind the left quadrant of the green and is a good aiming point regardless of pin position since a bunker guards the right side. The pin position chart on the scorecard was accurate for the entire round with only one exception over the 18 holes.

The 1st hole is a wonderful starter, downhill and just 314 yards from the Gold tees. It is not a pushover because the fairway is of average width with a bit of a slant at the edges of the fairway toward the rough on both sides (and trees on the right). The row of trees behind the green and the mountain beyond it preview the impressive Green Mountain views on the rest of the course.

I am partial to dogleg holes, and the 3rd at Williston fully satisfied my predisposition. The hole goes hard right and is short at just over 300 yards; some might complain it is a bit too easy, but any green fronted by water and a restraining bulkhead, Pete Dye style, can wobble the knees slightly. I am not used to having a pitching wedge in my hand after my drive on a par 4 but, in this case, I managed to drop my shot 15 feet left of the pin. (No, I missed the putt.)

The gallery of photos I have included provides a good idea of the hole-by-hole layouts, but one more hole bears mentioning, the par 4 17th, yet another dogleg, this one to the left around a large pond. I remarked to my playing partner that the hole reminded me of many in the Myrtle Beach area. At 346 yards, it isn’t long from the tees, but the approach is deceptive, about one club more than the crisp iron I hit to the tall grass in front of the green, about six inches from the fringe. The landscaping behind the green – terraced with a colorful array of flowers – added to the hole’s appeal. (Note: Earth movers posted beside the teeing area on the 17th appeared to be building a new set of tee boxes that will reduce the angle of the tee shot and make it possible to drive a ball well inside the 150-yard marker; it will also pretty much take the fairway bunker about 190 yards from the current Gold tee box out of play. It seemed to me an unnecessary and counterproductive tweak of an already good hole.)

But never mind, Williston is player friendly right from the moment you pick up the scorecard which, helpfully, suggests the most appropriate tees to play. Quoting the USGA, the card recommends tee box choices by the length of your drives: Black (the tips) for those who hit the ball 250 yards, White at 225 yards, Gold at 200 yards (that’s me) and Green at 175 yards. I have seen signage on some golf courses that make suggestions based on a player’s handicap, but this is the first time that driving distance was the driver (no pun intended). It makes a lot more sense to me.

Williston Golf Club was a revelation for its player friendliness, sparkling conditions and its owner’s desire to invest in an already good golf course. It generates a modest 20,000 rounds per season. Now if only the thousands that play it will fix their damn ball marks.

Course is walkable with a few decent size hills.


Old Duffer's Tavern
Distance from course:
Restaurant was not open on the day I played. Looked comfortable, pretty standard.