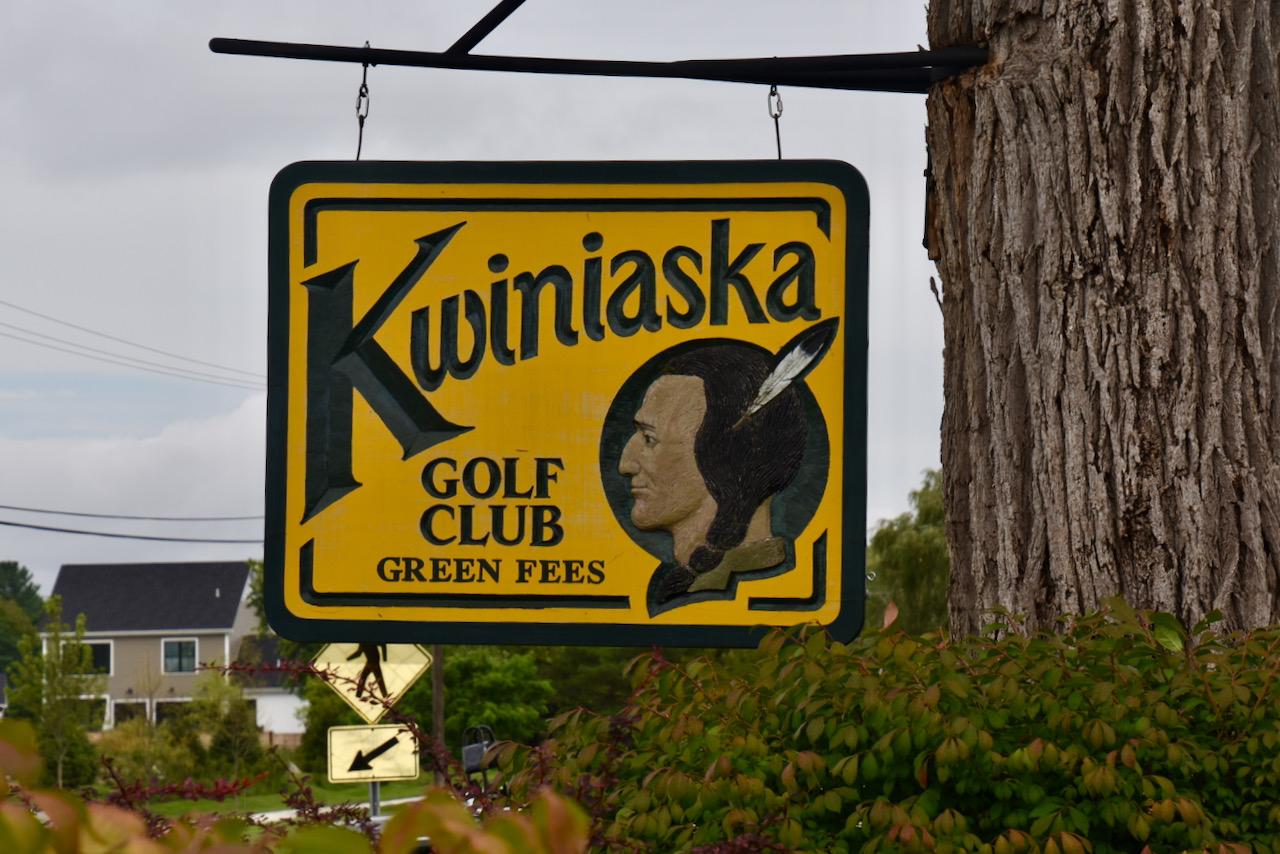 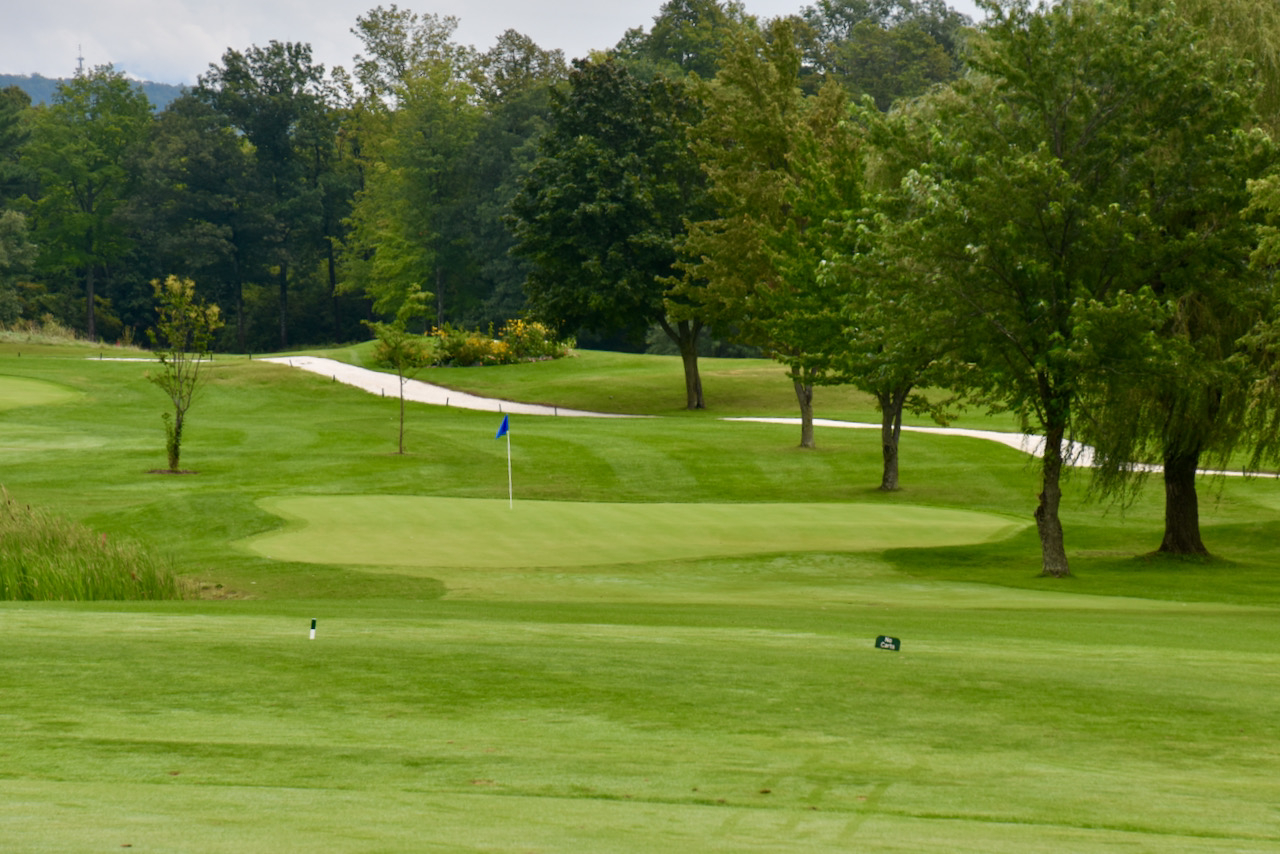 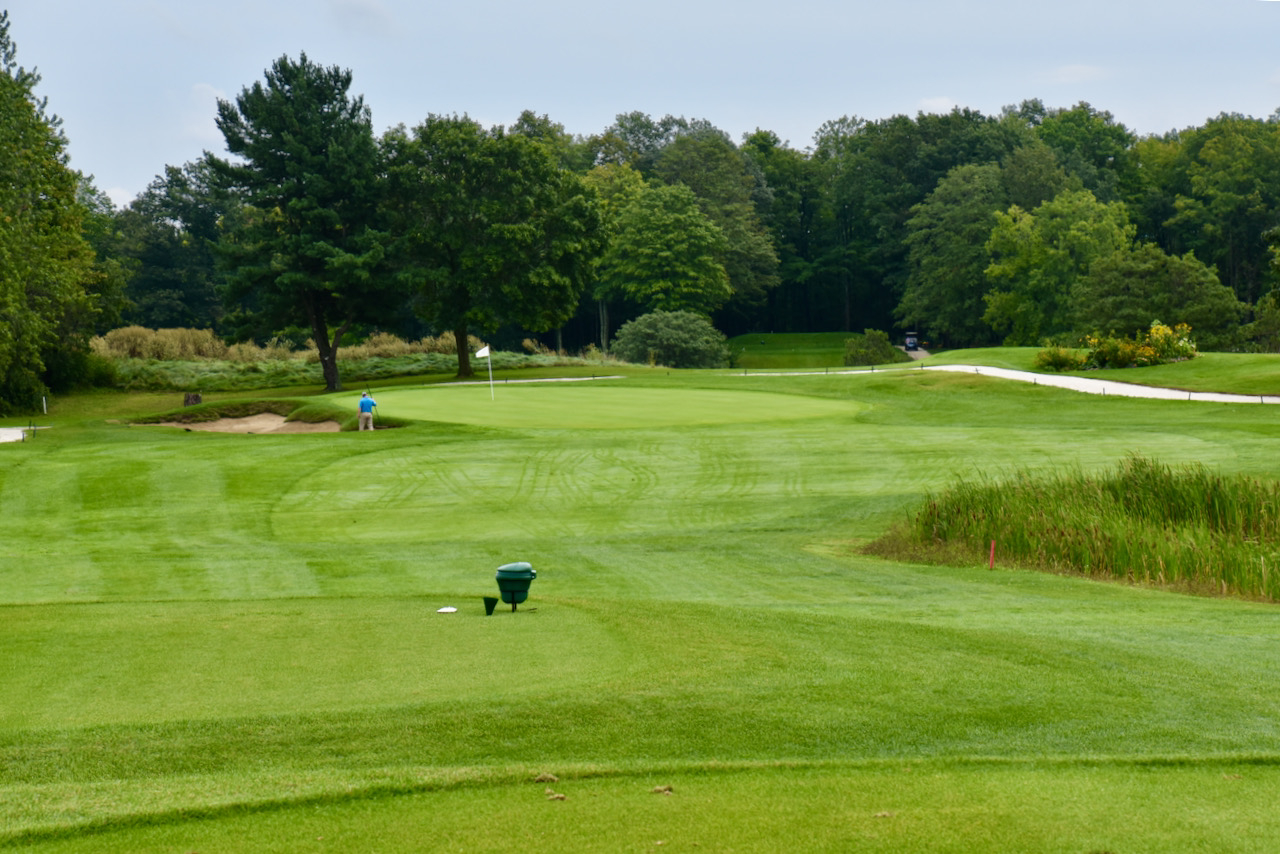 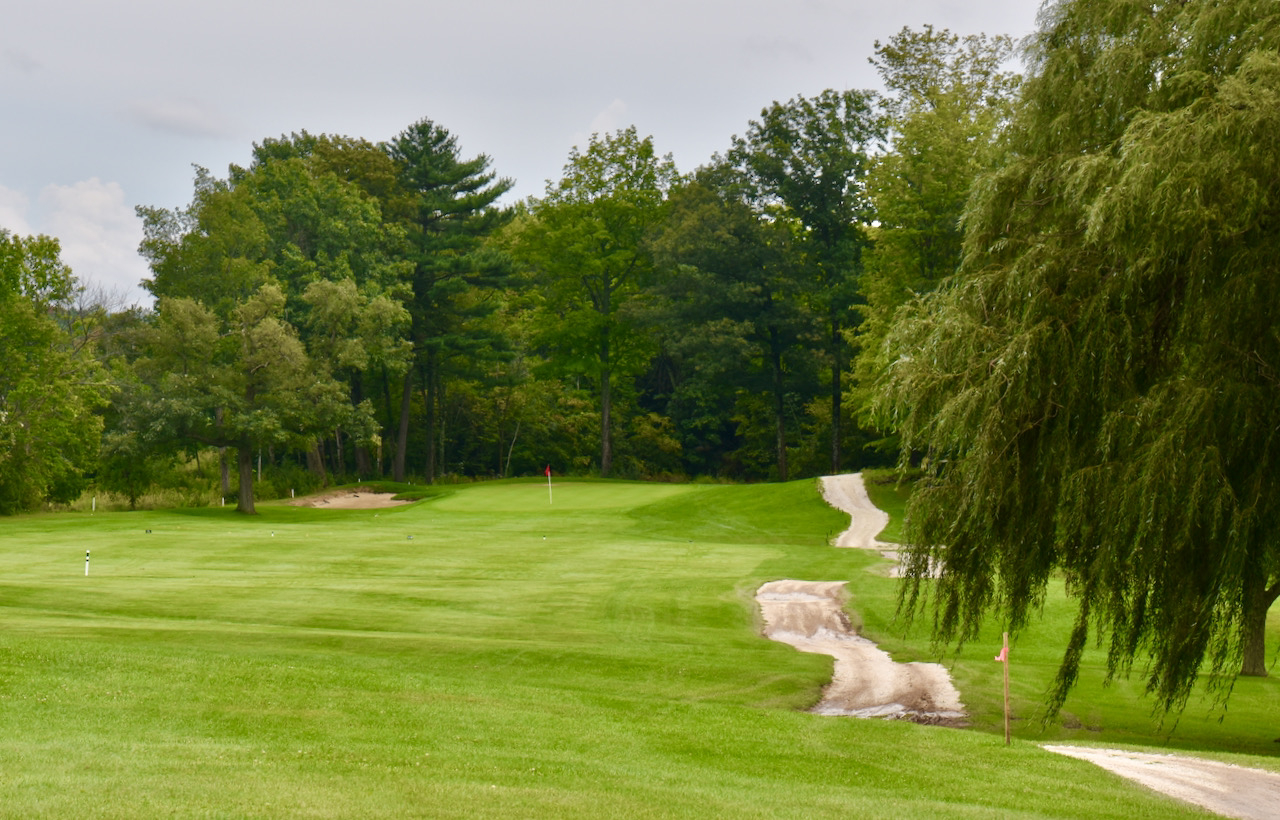 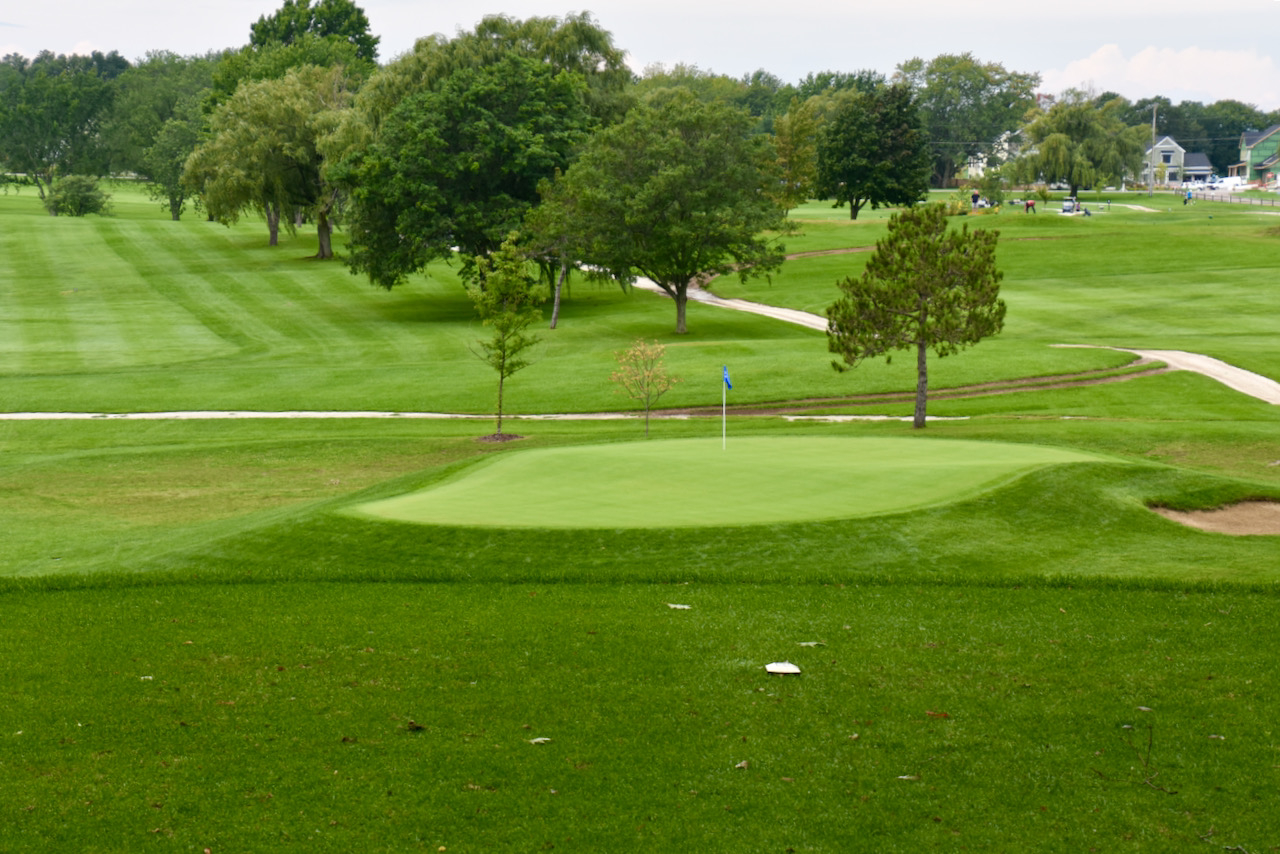 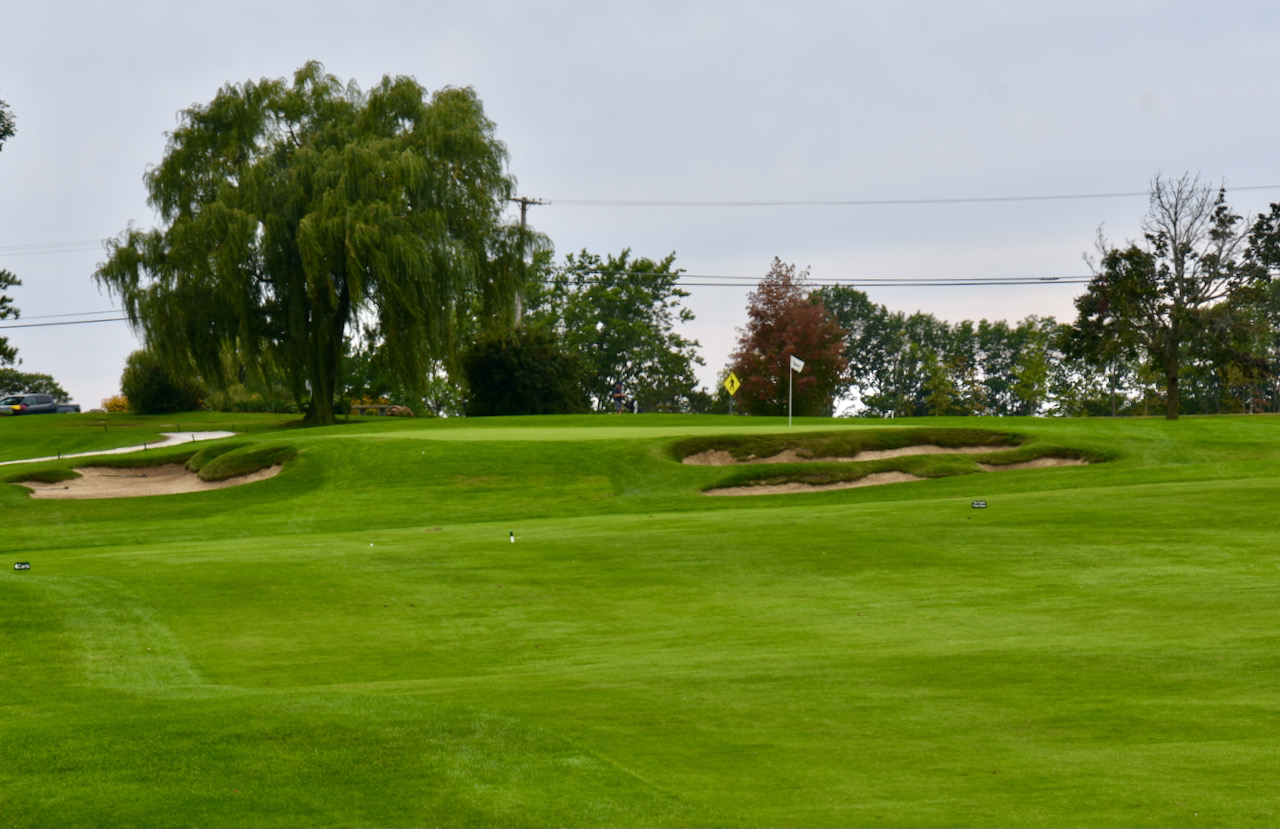 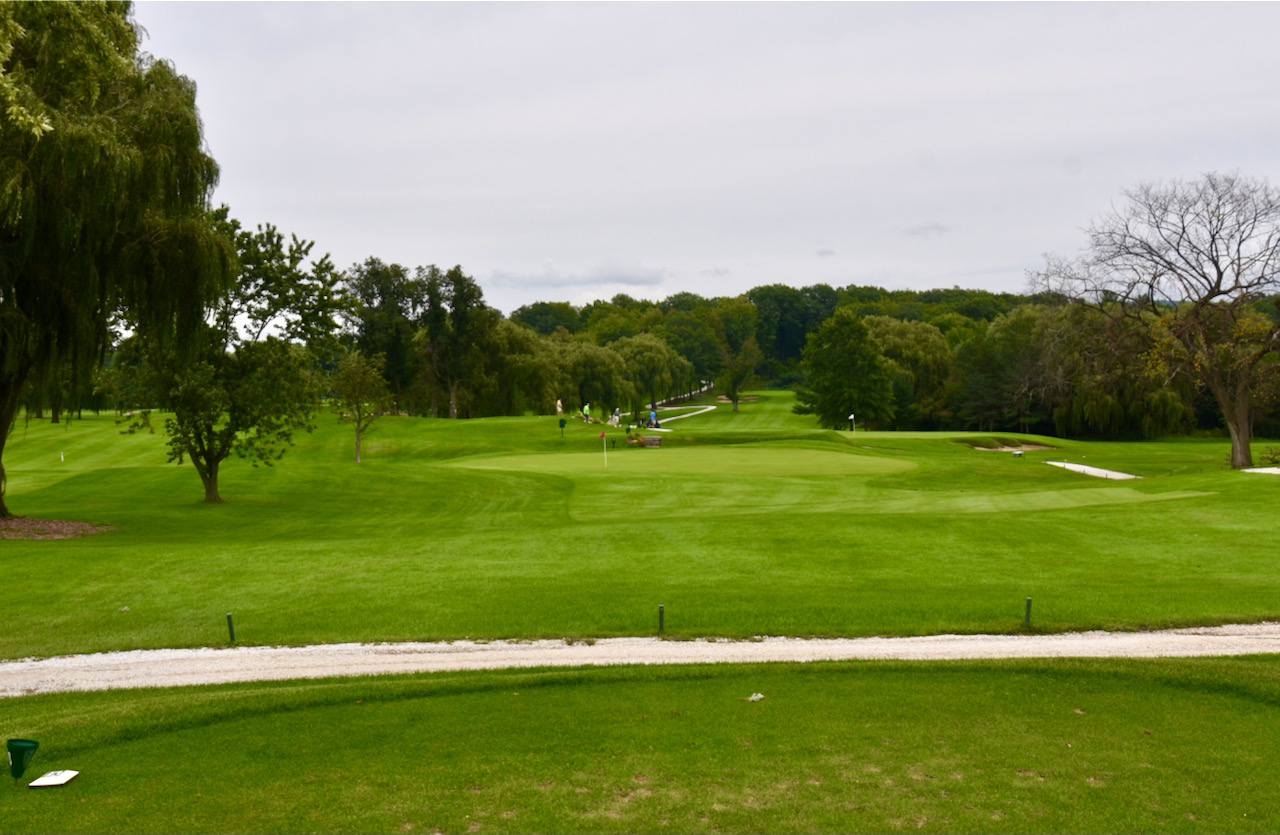 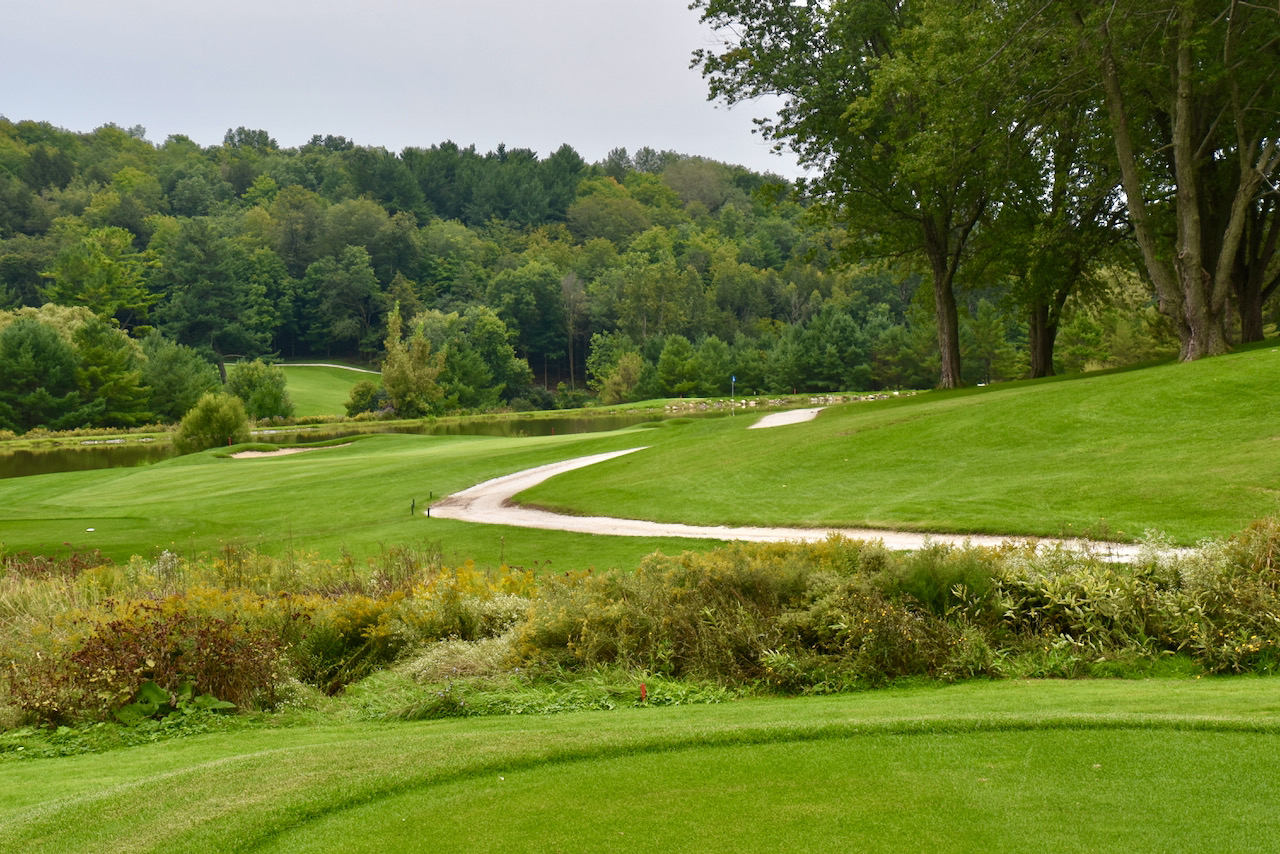 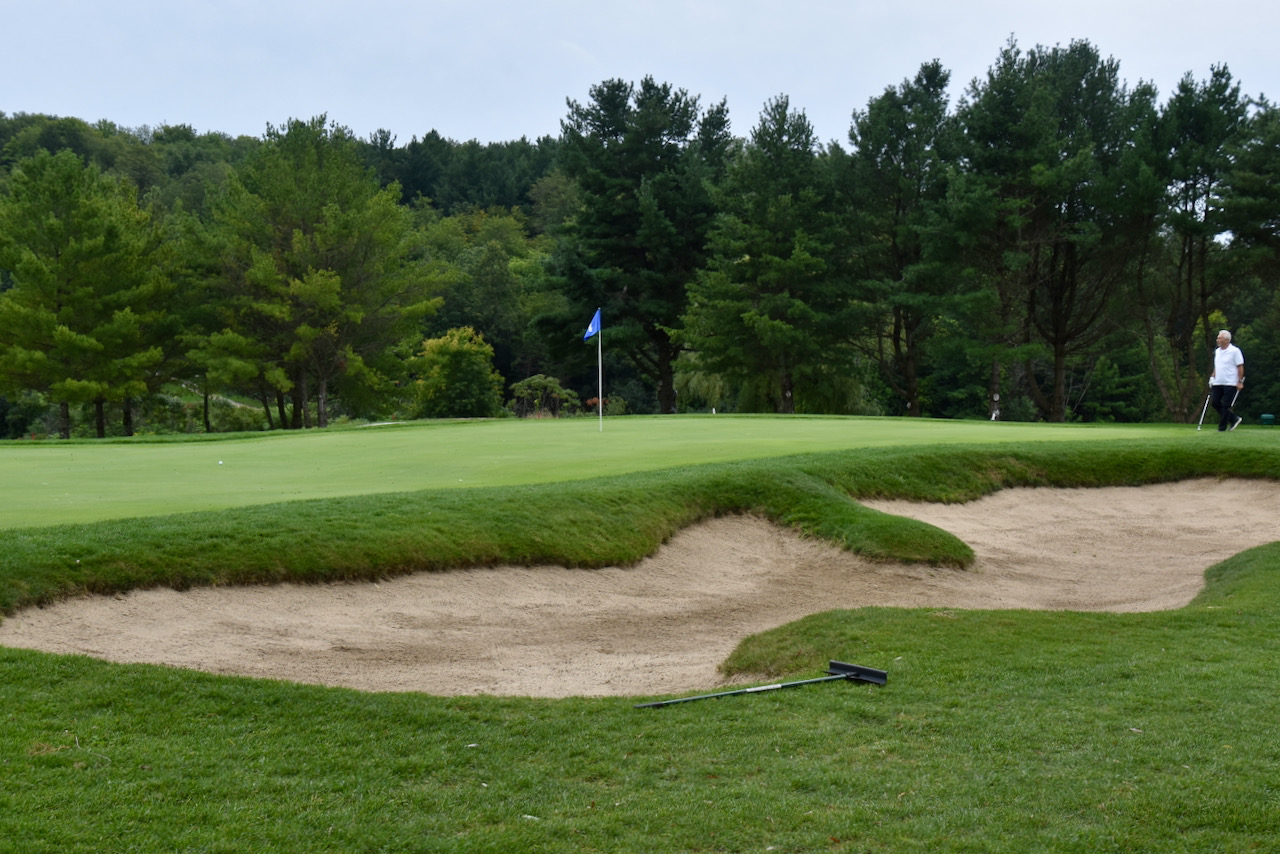 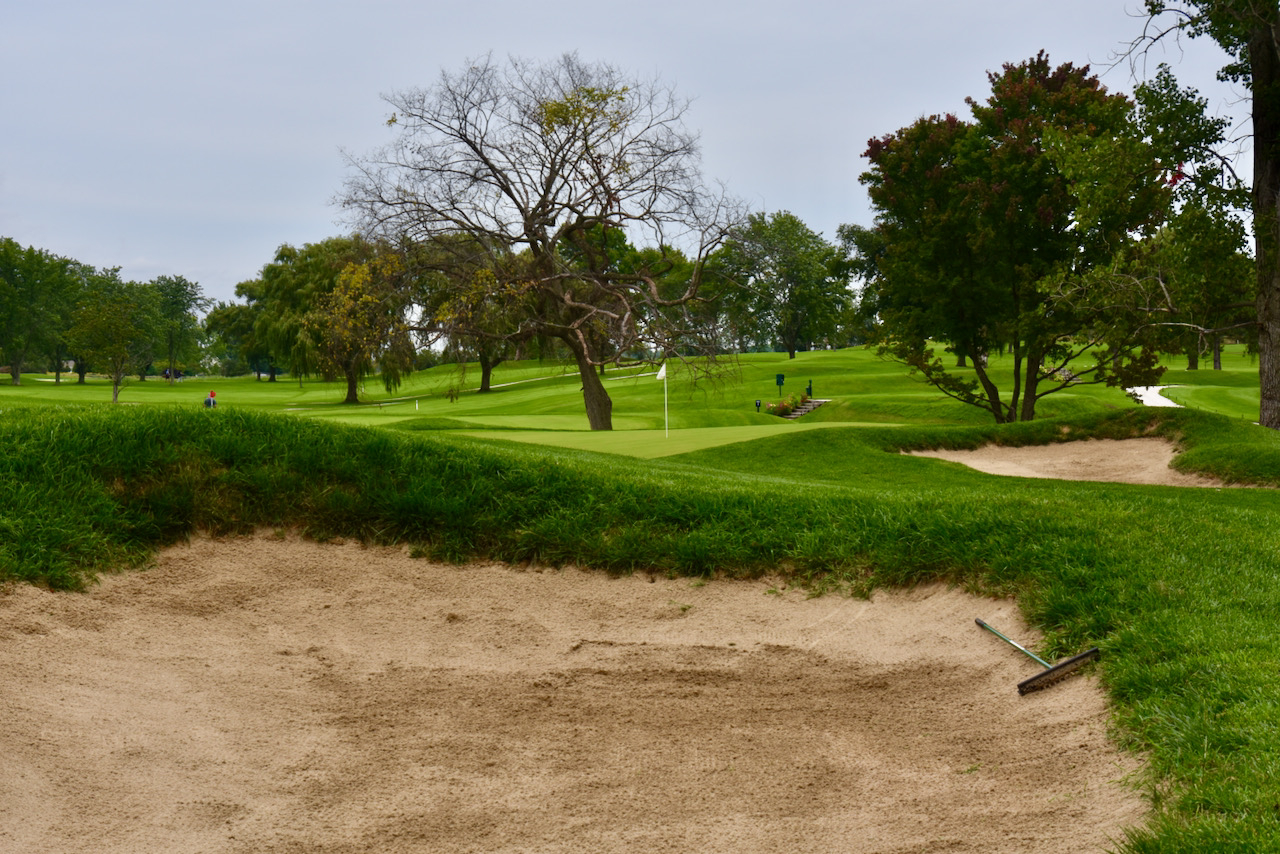 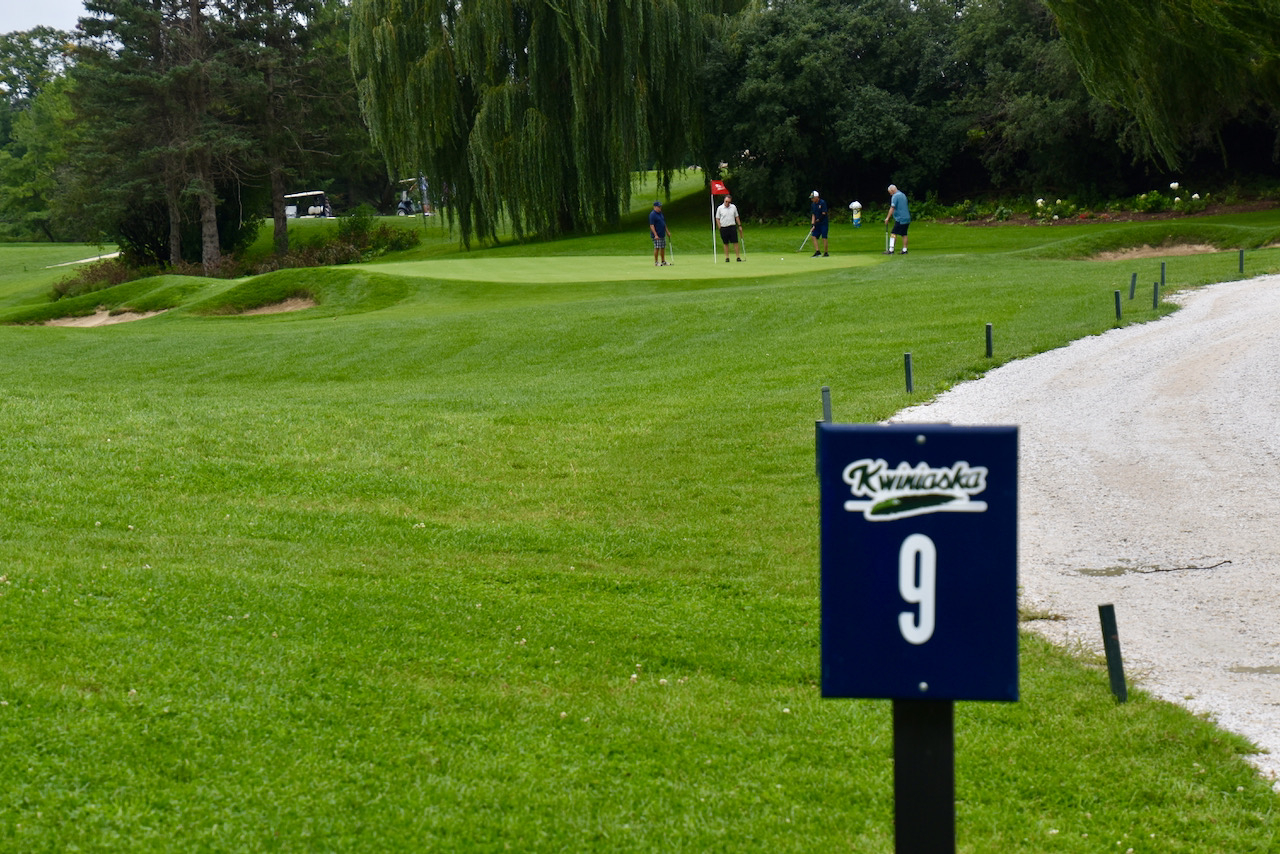 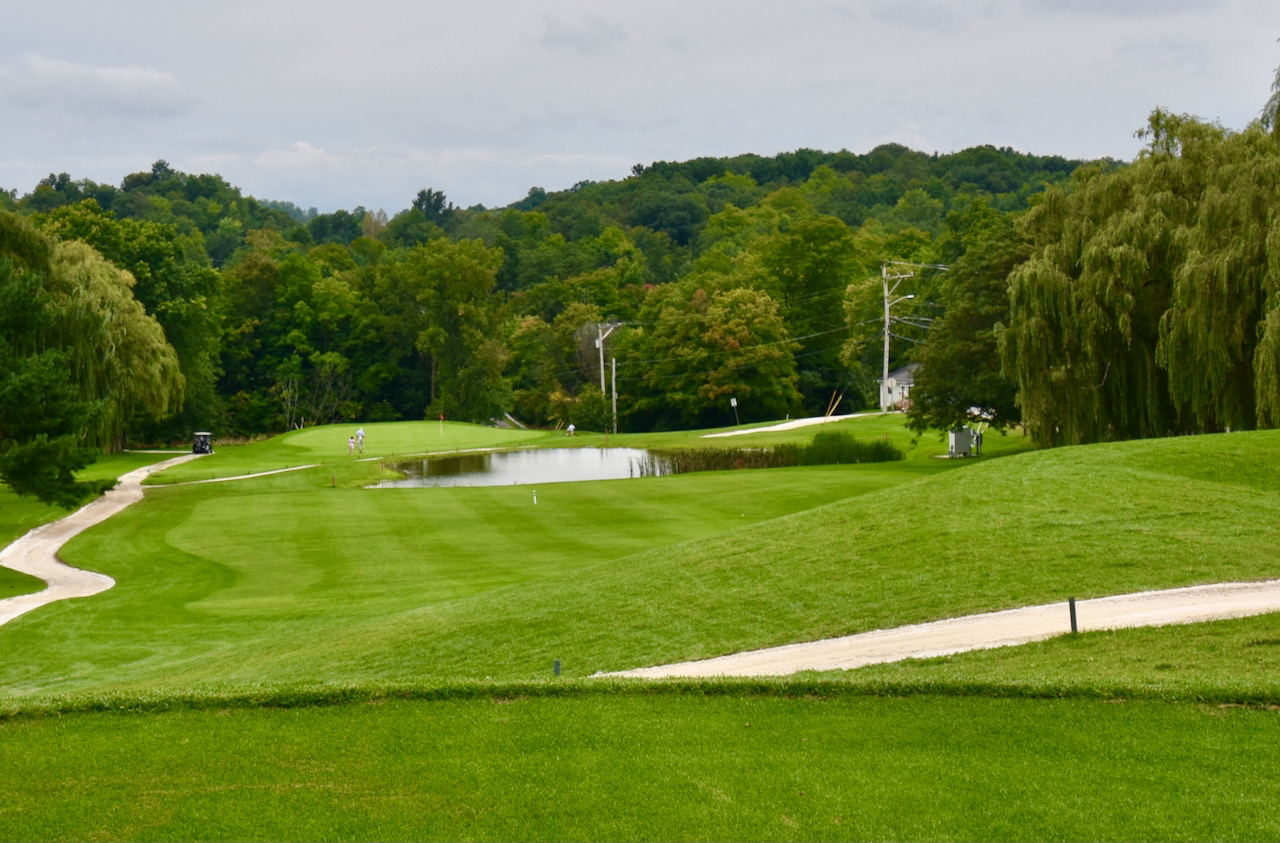 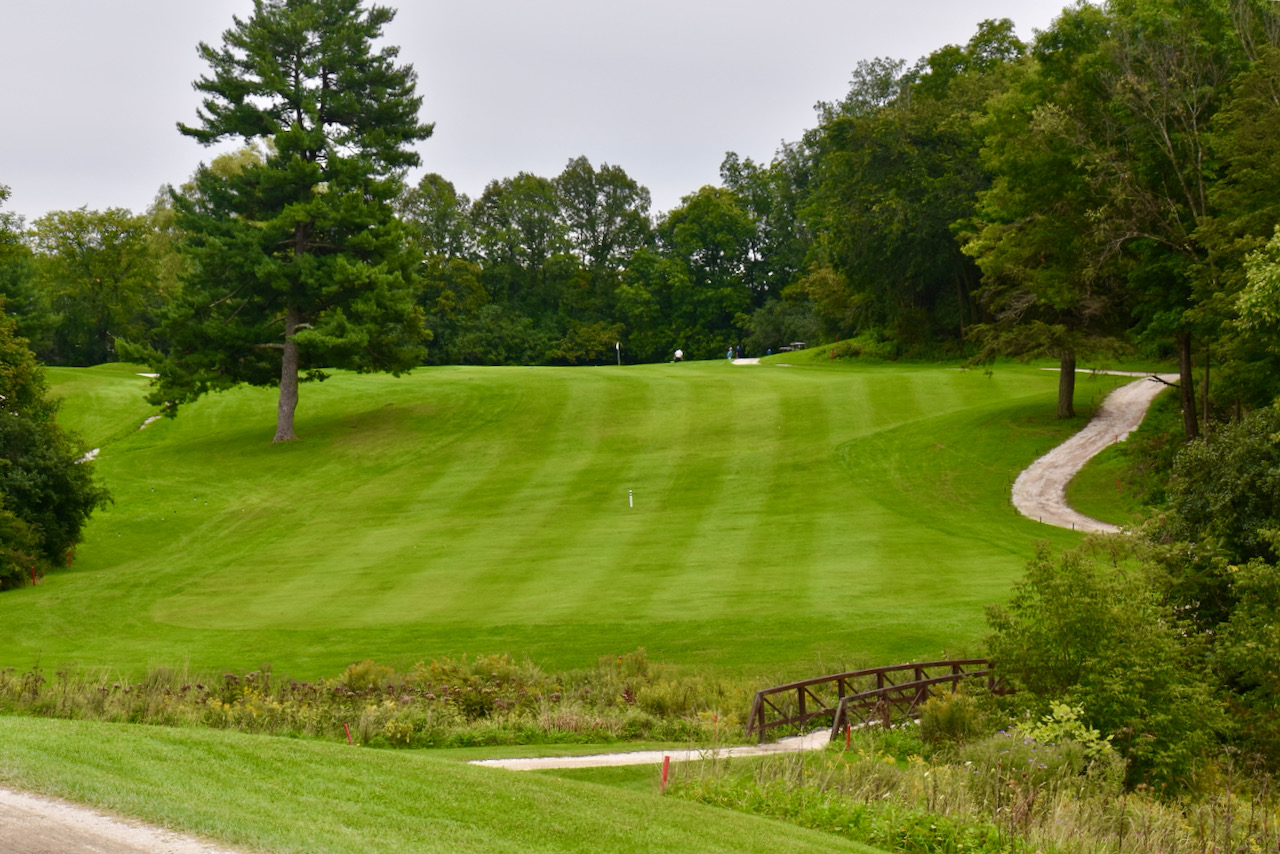 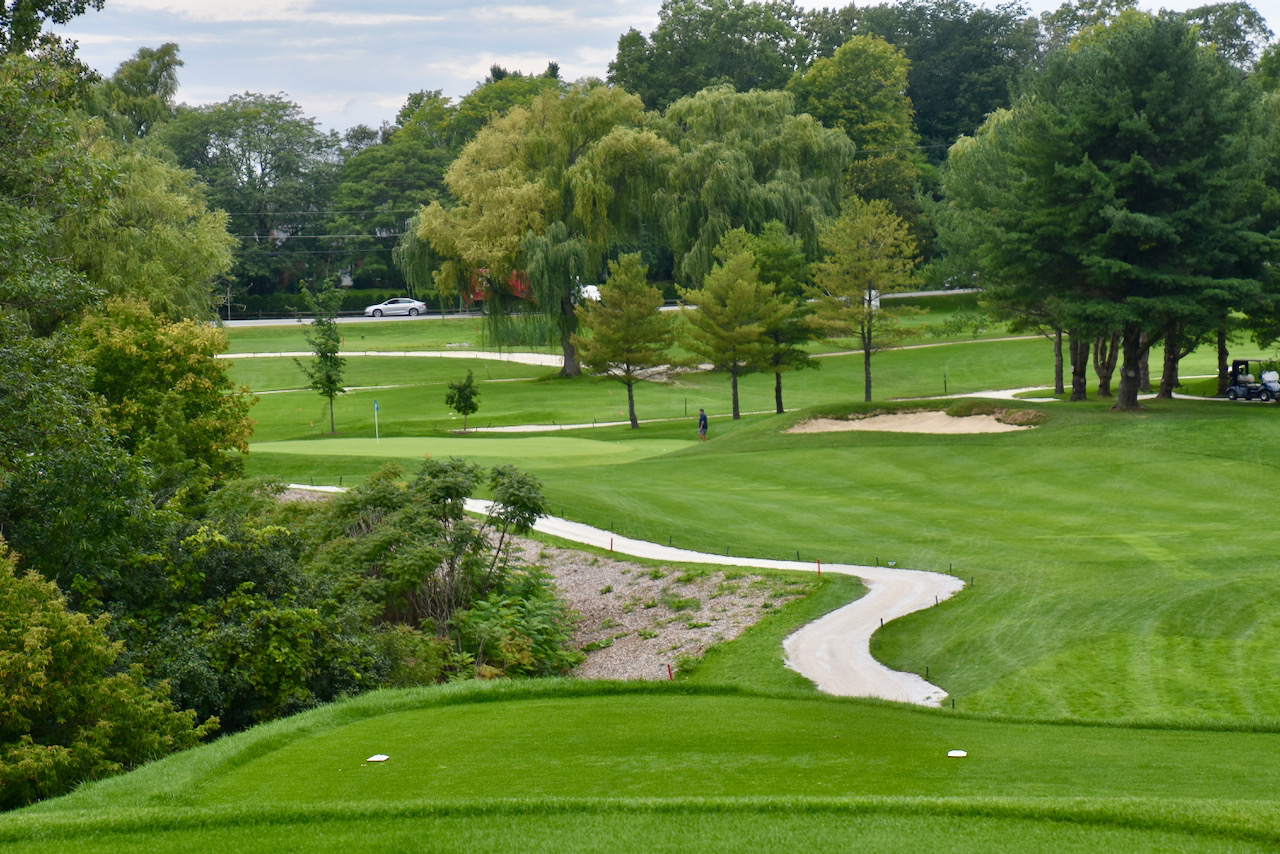 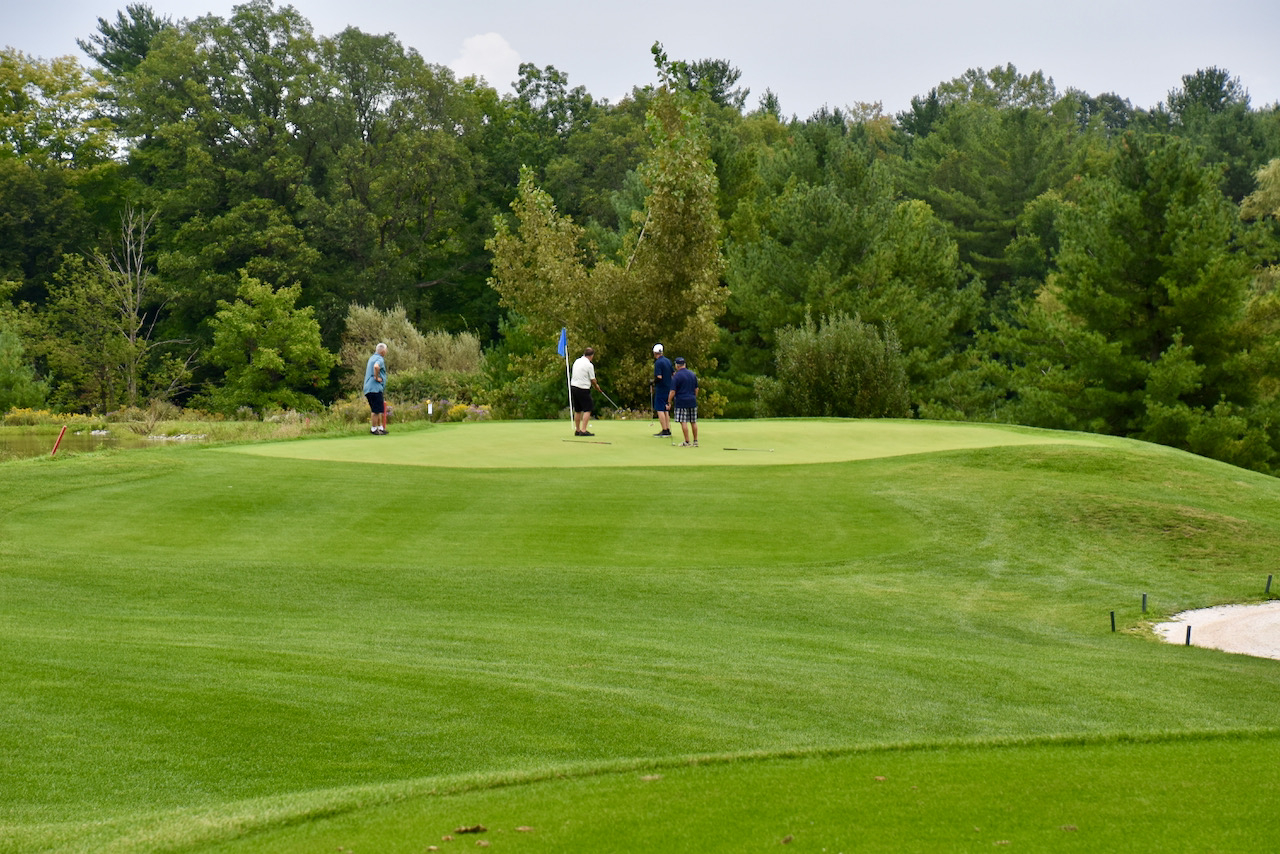 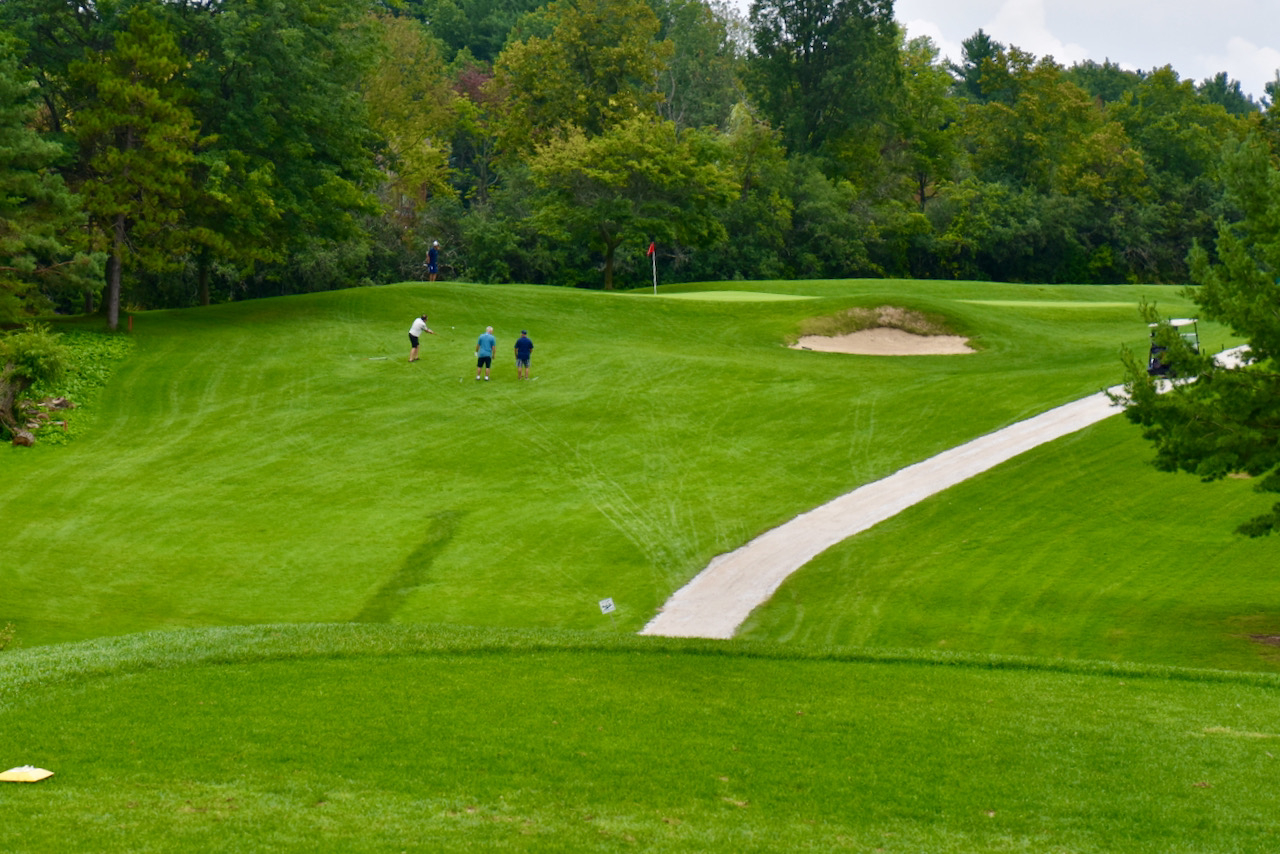 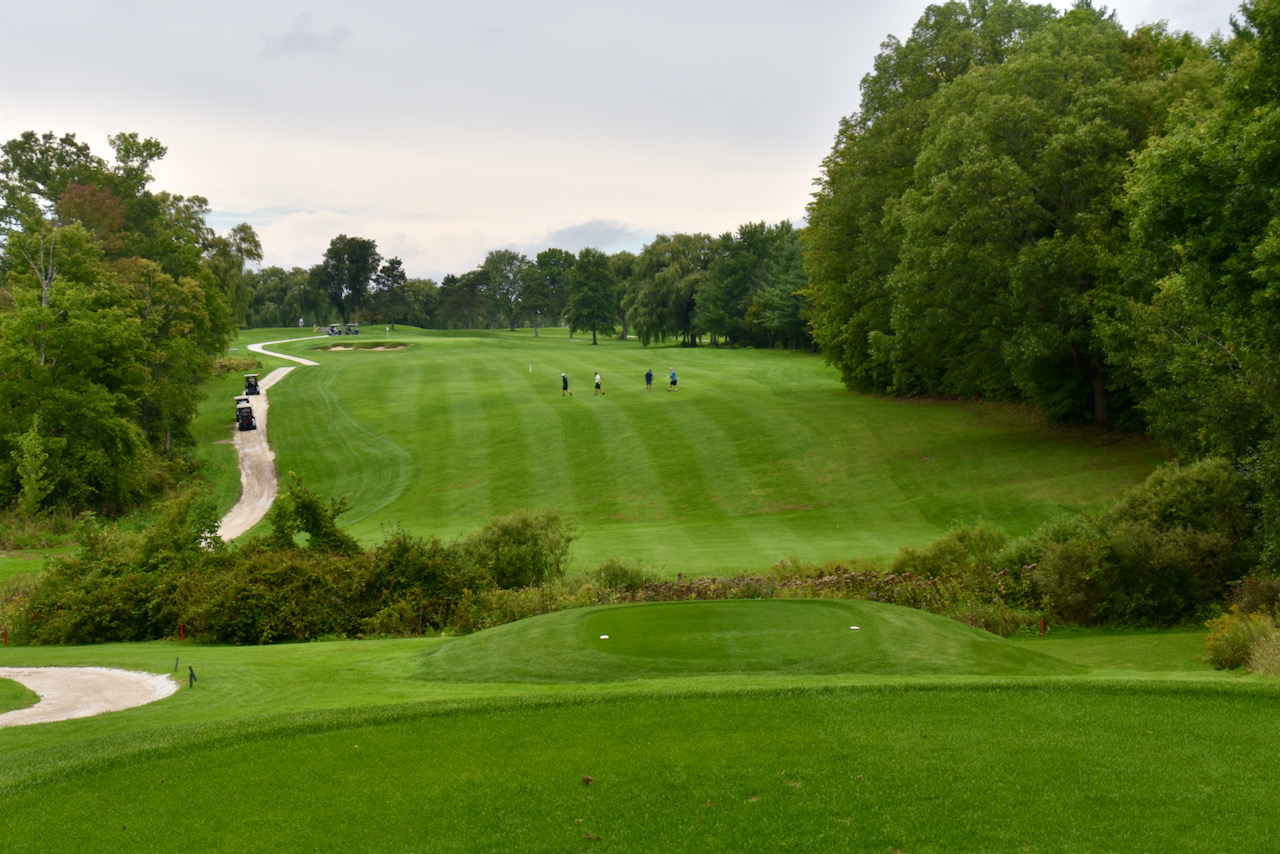 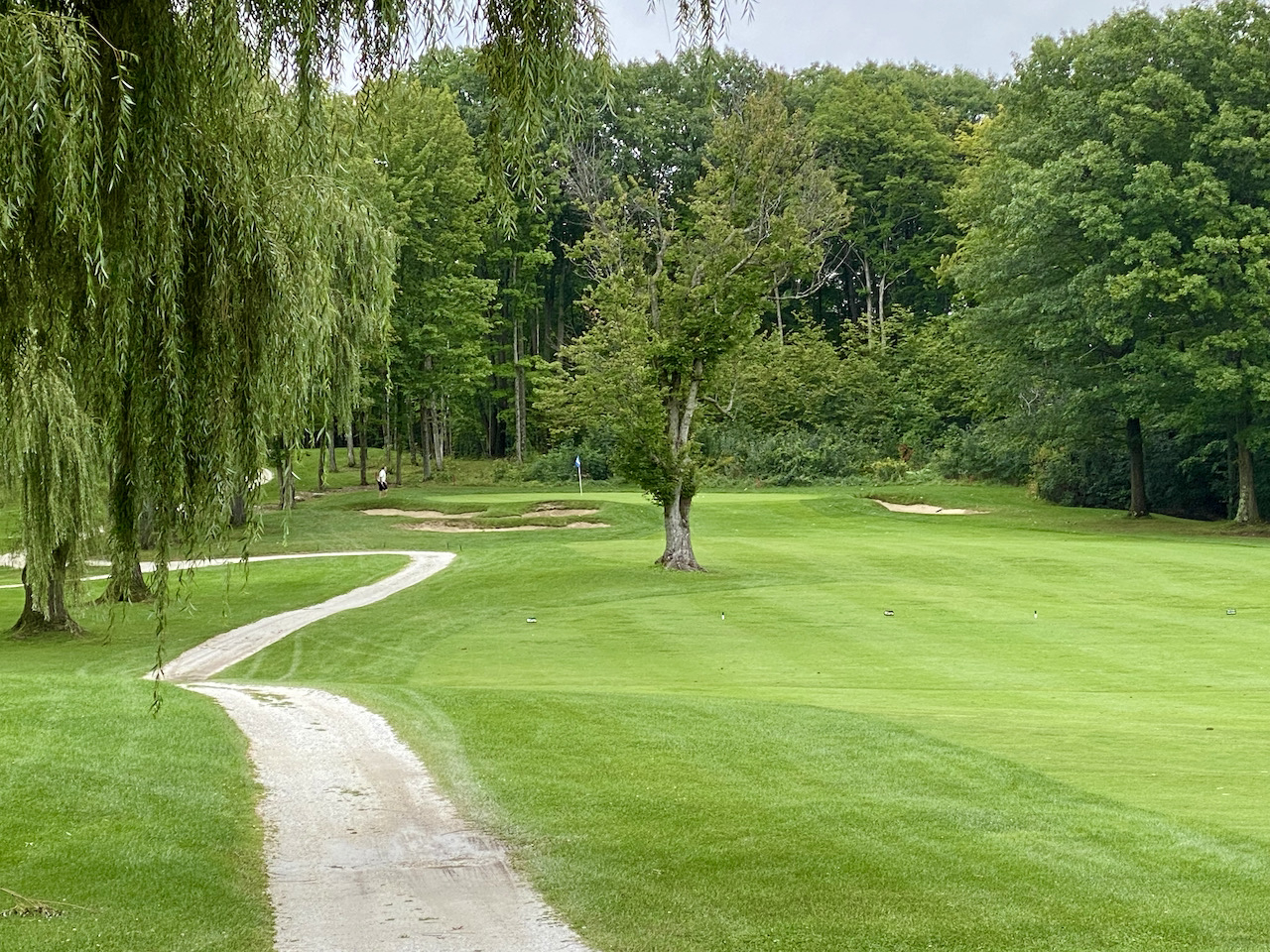 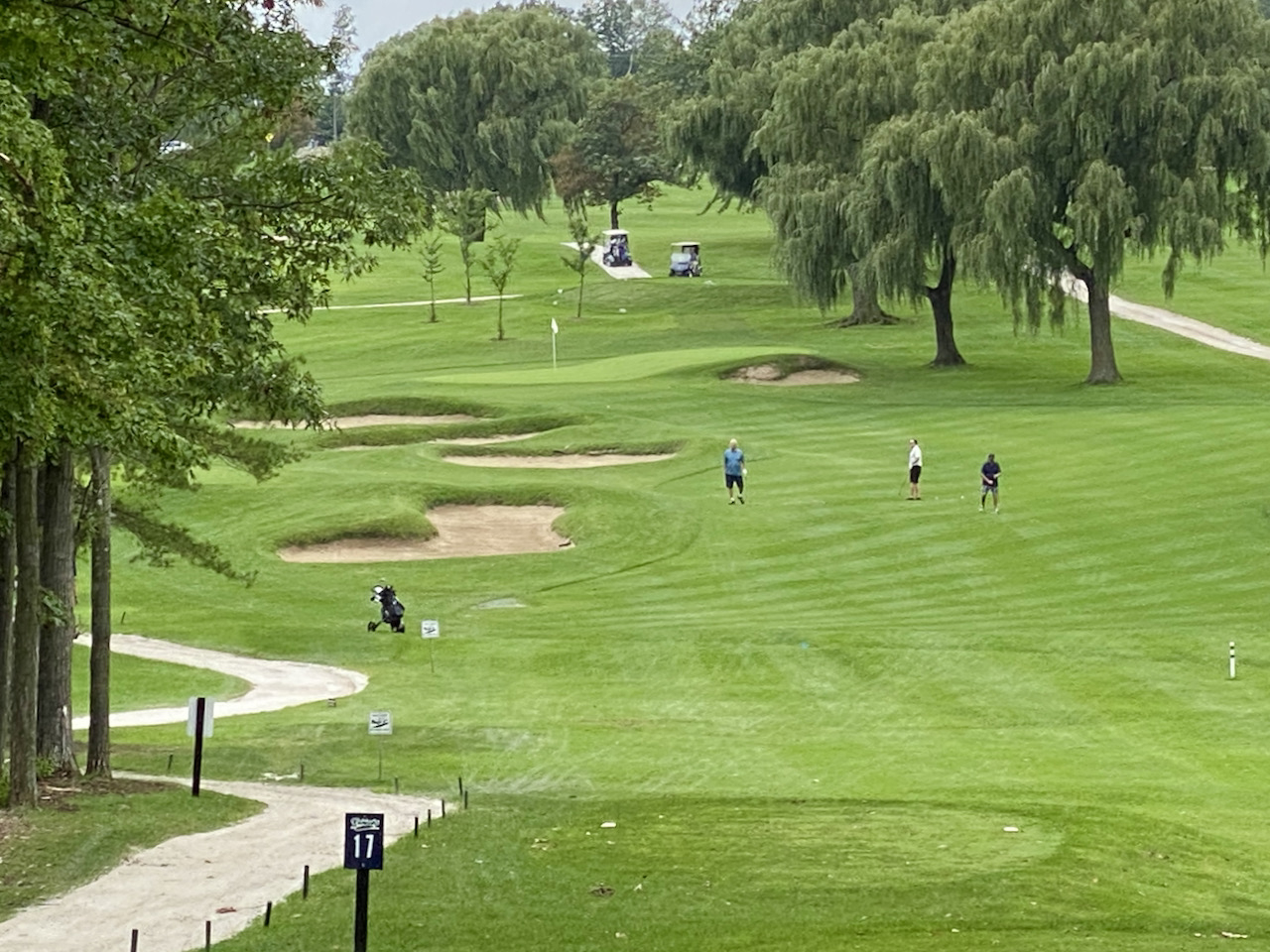 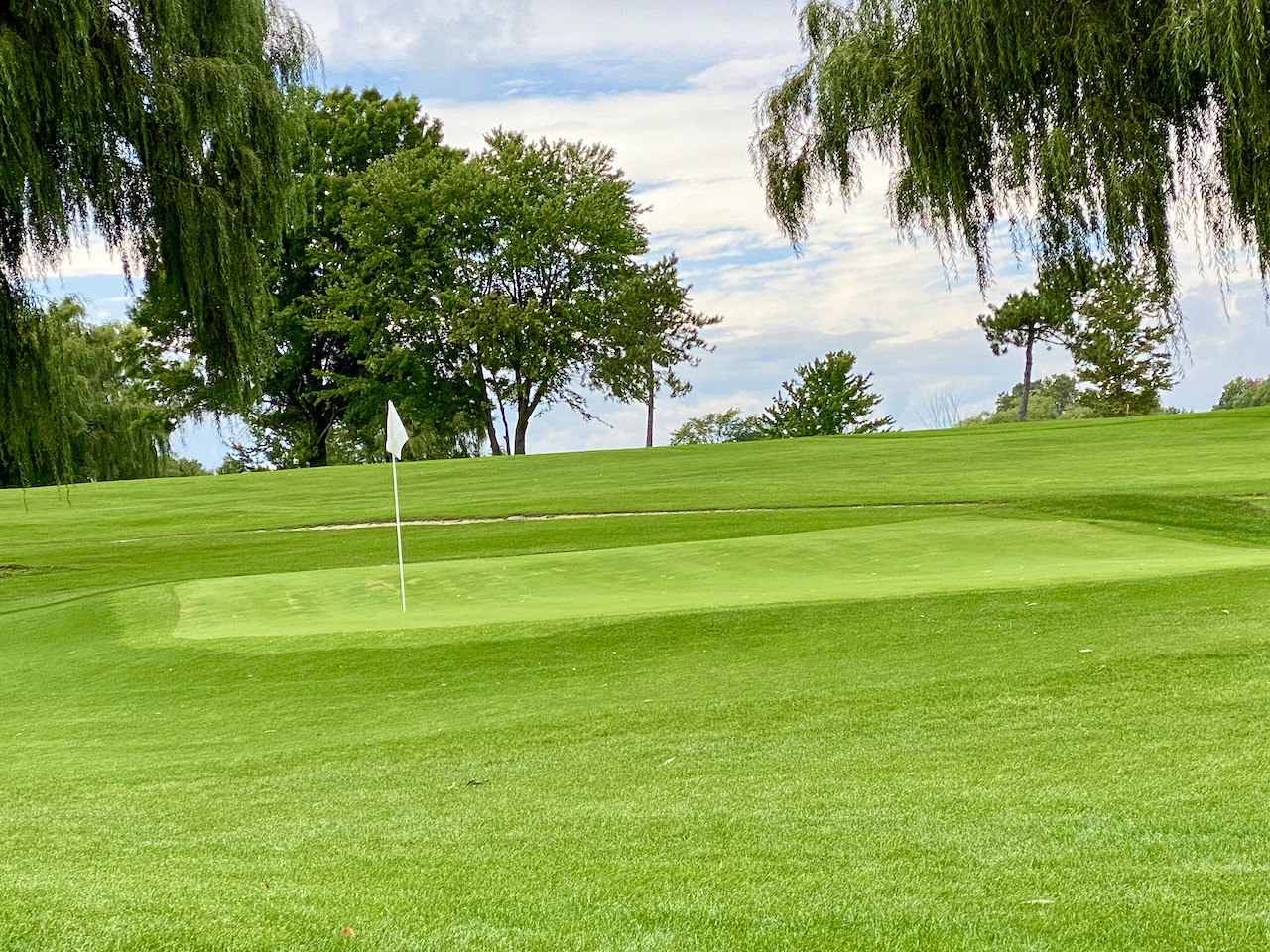 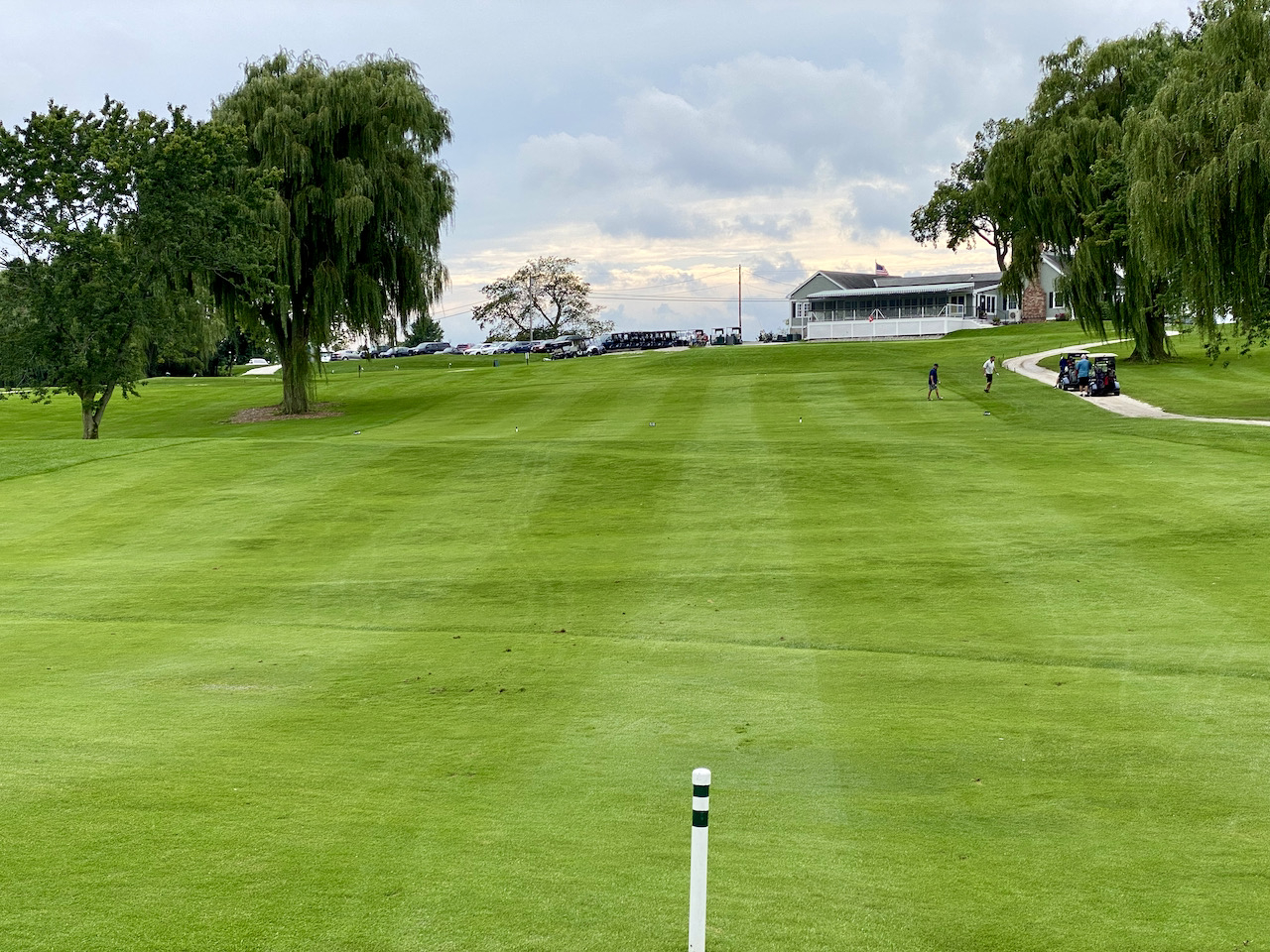 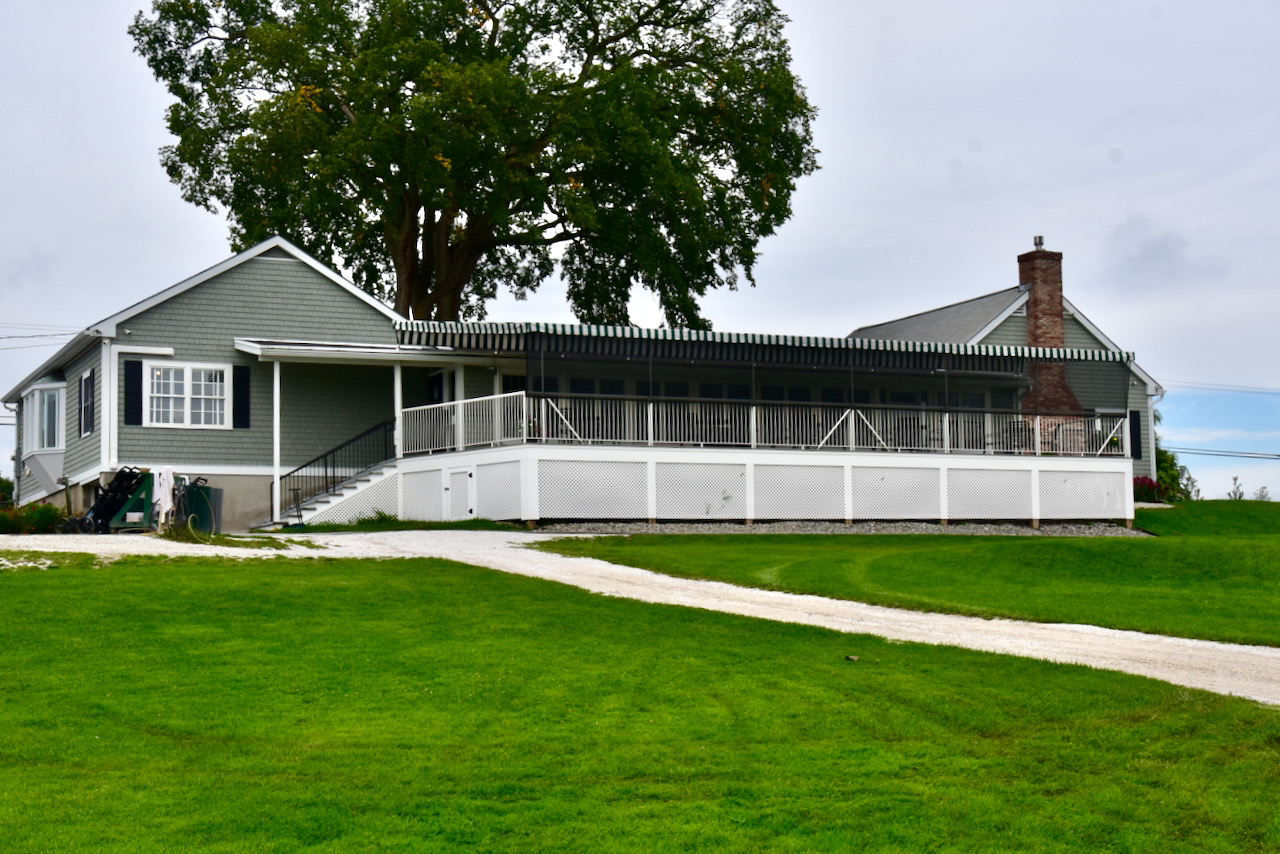 I love to play a golf course for the first time, although not as much as I do the second time. That first round is like a first date; you are a little nervous, some of the moments are a bit awkward, and the course doesn’t begin to reveal itself until another go-round. And if you make it to, say, a third round, you could be on the brink of falling in love.

Kwiniaska Golf Club just south of Burlington, VT, doesn’t waste much time letting you get to know it. No blind tee shots, and the fact the course did not offer a yardage book as a guide for a first timer was no problem; what you see – from the tee box and the fairways – is pretty much what you get at this popular local course. Even the greens, which were in terrific shape and faster than the dozens of public courses I have played in the last few years, offered few surprises. Putts generally follow the line you read.

The green fee rates on the 55-year-old course were no surprise either; at $42 walking and $64 with cart, they were within a few dollars of what I paid at other public courses in northern Vermont over my month-long stay. The greeting in the pro shop had a genuine “Glad to see you” vibe, and after the round, Club Manager Charli Kail stopped by my table on the back deck of the clubhouse to answer a few questions about the history of the club and the work that has been done on it in recent years. With great diplomacy, she declined to answer my question about the semi-private club’s number of members.

“The owner prefers we don’t publish that,” she replied, with a smile. Whatever the number is, current members and new members are all getting a bargain. Members can renew their annual membership for $1,525 and new members just $1,595. That is a good deal given the quality of the layout and the apparent customer service everyone we met provides. (The young man maneuvering carts chatted me up like I was an old friend.) Given the green fee rate at “Kwini,” as the locals call it, and the April to October Vermont golf season, I figure the break-even point for the annual fee is about 36 rounds, or less than two rounds per week.

Kwiniaska is a homegrown club with some recent “professional” touches added. Opened in 1965 by Brad Caldwell, the course originally straddled Spear Street, which runs from Burlington south to Shelburne through a community of some of the biggest and most expensive homes in the area. (The private Burlington Country Club and Vermont National clubs are also nearby.) When he was in high school and college, current owner Robert Nappi worked for Caldwell on his farm as golf course construction began on the land. After Brad Caldwell’s daughter sold the six holes on the west side of Spear Street to a housing developer, she put the rest of the club up for sale.

In 2017, Nappi and his wife Marcia bought the remaining property and its 12 holes. They hired P.B. Dye to reconfigure some of the other 12 holes and add an additional six on the east side of the street. All in all, six of the original 18 are still in play, with just a few minor touches added. I did not notice any glaring design differences among the holes; they appeared to have been designed at the same time, although the back nine shows a bit more drama in its bunkering. The 17th hole, for example, a slightly doglegged 340-yard (from the tips) par 4 from an elevated tee, plays so short that it must provide something in the way of a greenside challenge. It does, in the form of four bunkers all in a row that guard the left half of the tiny rectangular green from about 50 yards out, as well as a steep-faced trap that guards the right front. And just to add a little more challenge to the effort, the green is extremely shallow and is two-tiered, high level on the right, low on left. Visually it is a beautiful hole yet holds the potential to bite you late in the round.

The par 3s at Kwiniaska are not the strongest visually. Two are extremely short, especially from the next-to-longest tee boxes – 101 and 111 yards. The 111-yard 13th hole comes just before the 180-yard 14th; there is nothing inherently wrong with two successive par 3s, but the fact that the back nine is par 35 implies that some design compromises might have been made to squeeze the layout from the tips into a modest 5,810 yards. On the other hand, the three par 5s out of four successive holes on the front nine seemed downright weird. That was a first for me.

Despite the idiosyncratic onslaught of three shotters, the par 5s and 4s were delightful. Besides the aforementioned 16th, other par 4 highlights include #1, the only right- or left-angle dogleg on the course, and a worthy starter to the round. You won’t feel any intimidation on that first tee box as the fairway landing area is generous in the extreme; trying to cut the dogleg that early in the round is a fool’s errand and brings a row of trees into play. At just 355 yards from the tips, the approach should be a short iron – say a 7, or so – to a deceptively tricky green, slanted from right to left and covered by a tree at right front and a small pond short and left. My playing partner, who would go on to shoot over 100, hit a crisp approach to the front of the green and sank a 30-foot putt for birdie. (He sheepishly apologized for what was to come.)

The back nine starts with a visually attractive but simple hole that required a 200-yard shot off the tee box to lay up short of a large pond. The gutsy but foolish play is to hit something farther to the left of the pond for a shorter approach, but the cart path runs beside the narrow strip of landing area and a slightly pulled drive risks bounding across the path and into the trees. It just isn’t worth it.

I especially liked the par 5s, despite facing three of them in the space of four holes on the front nine. (There is only one par 5 on the back nine.) At 460 and 480 yards from the tips, two of the par 5s on the front are easily reachable for big hitters. The 7th, at 460 yards, will be advantaged by a faded tee shot on the slight dogleg right. For the less aggressive-minded, a 200-yard straight drive will find safety short of a large bunker and water just beyond it. (I hit my drive 205 yards and had a stance on the edge of the bunker that risked Achilles heel damage.) The narrow but deep green is very well protected by long bunkers left and right.

Aside from the oddly consecutive par 5s and par 3s in the routing, my round at Kwiniaska was just about what anyone could want from an initial play. Although there are no blind shots as at courses a half hour away in the Green Mountains, there are plenty of other challenges in plain view. And the course was in excellent shape, the greens faster than many other bent grass greens on public courses in New England. I look forward to my second date with Kwini. 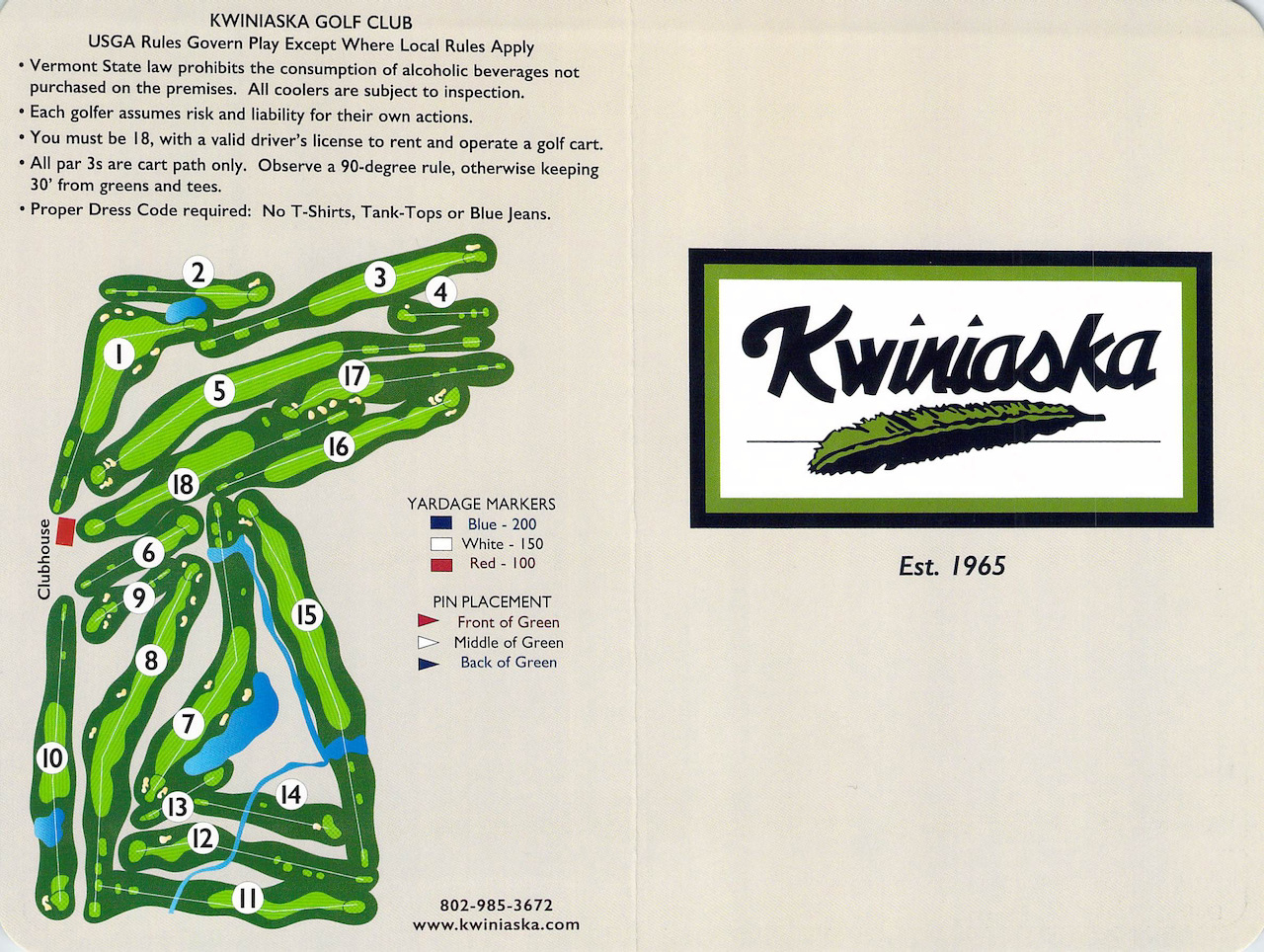 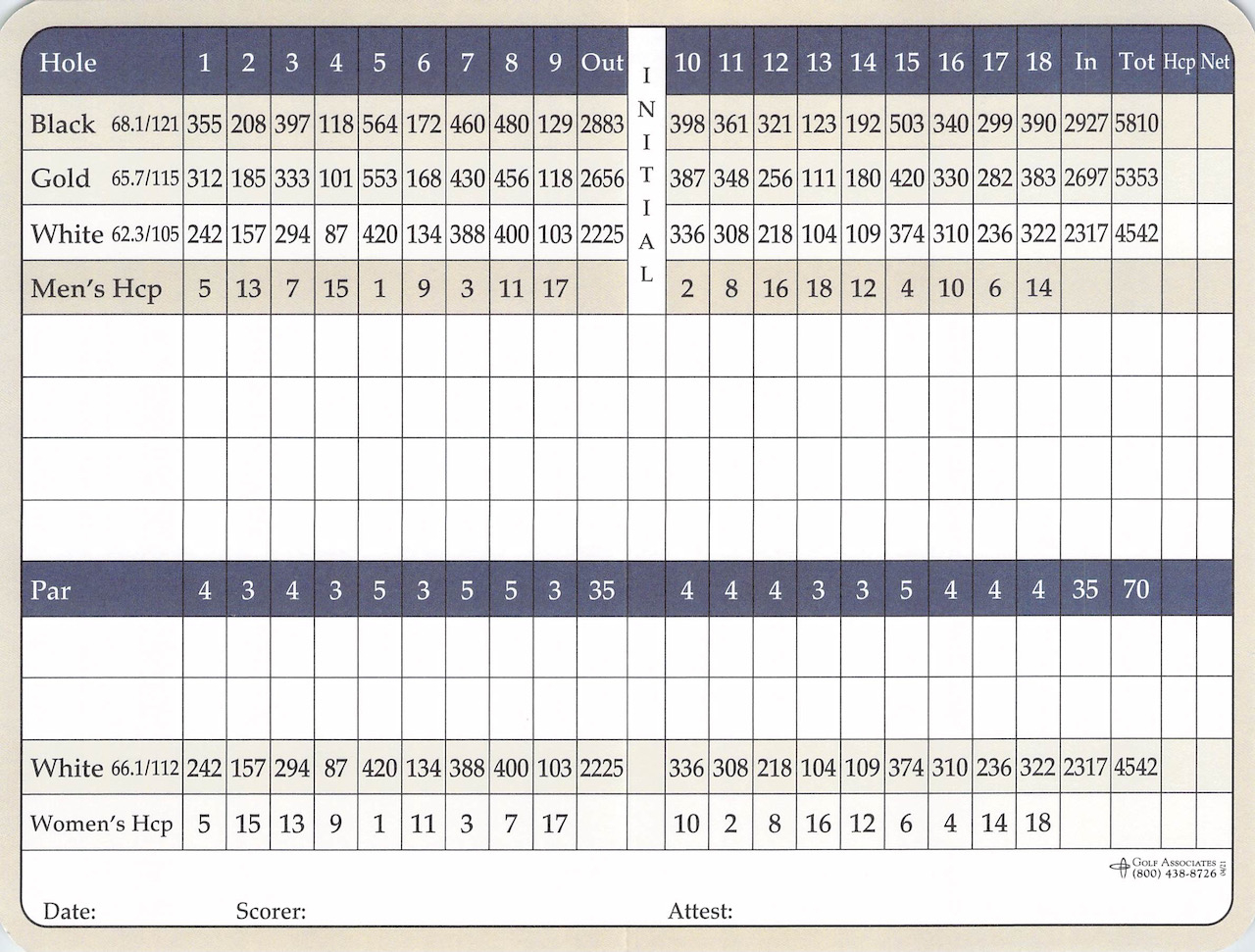