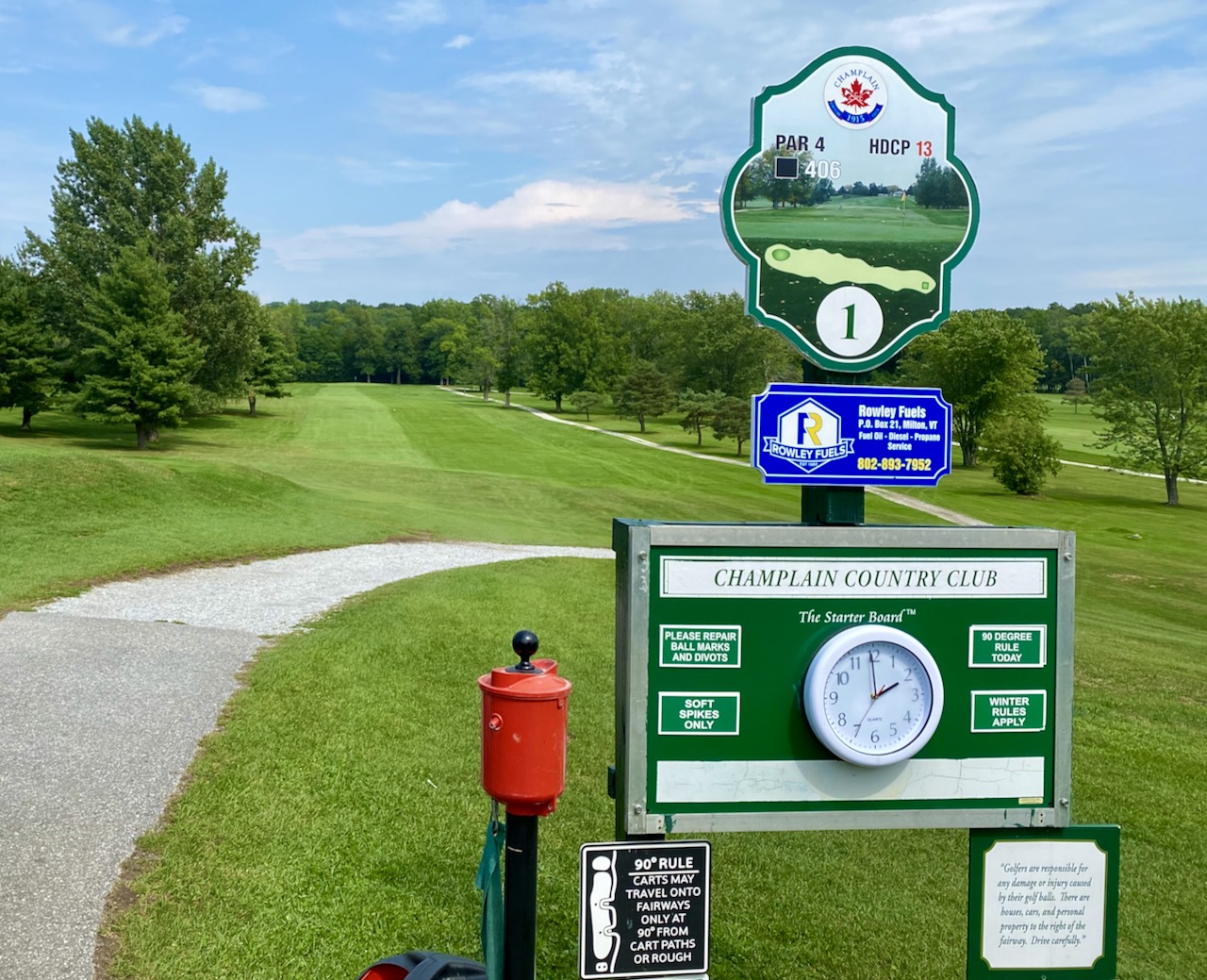 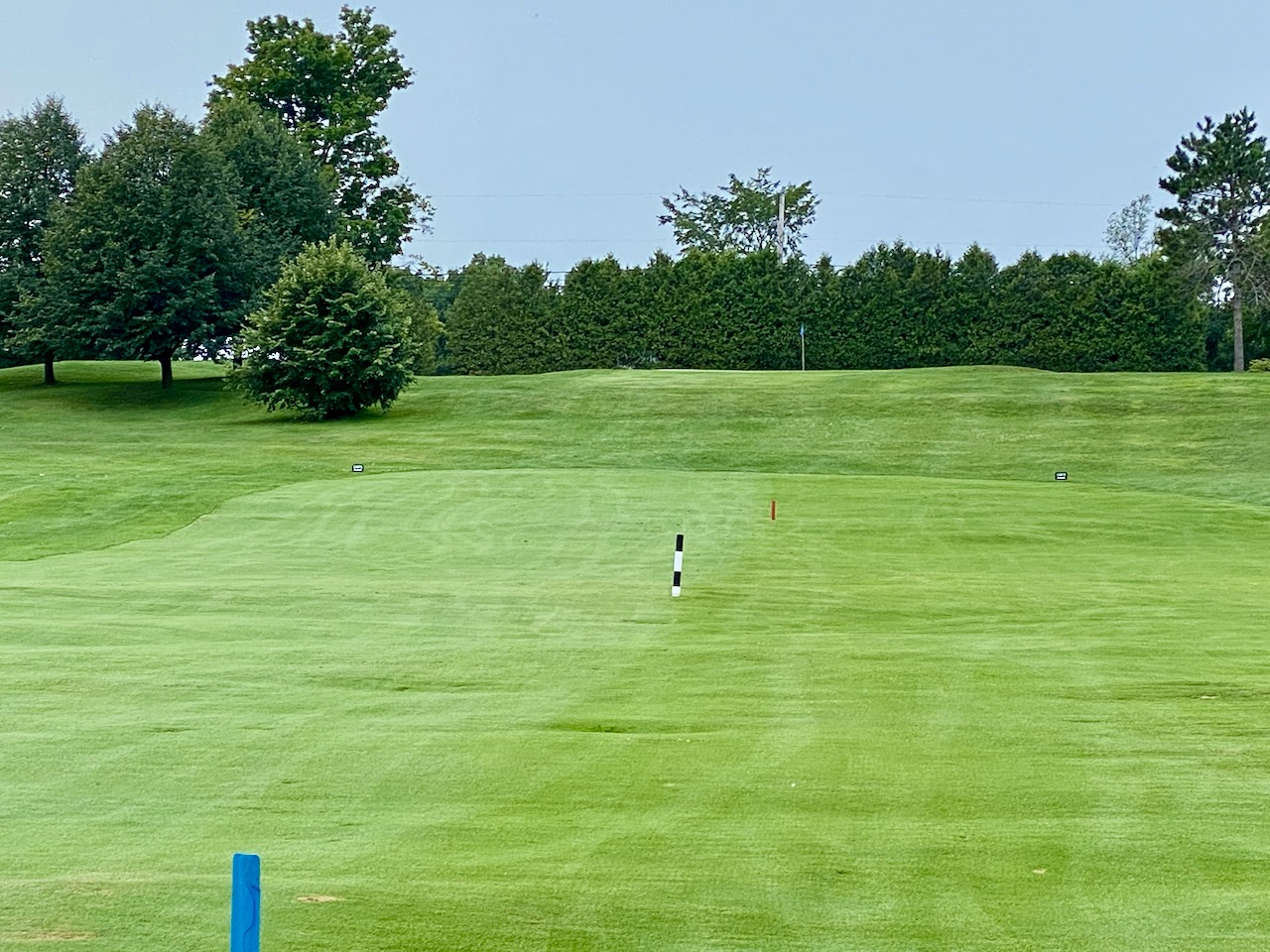 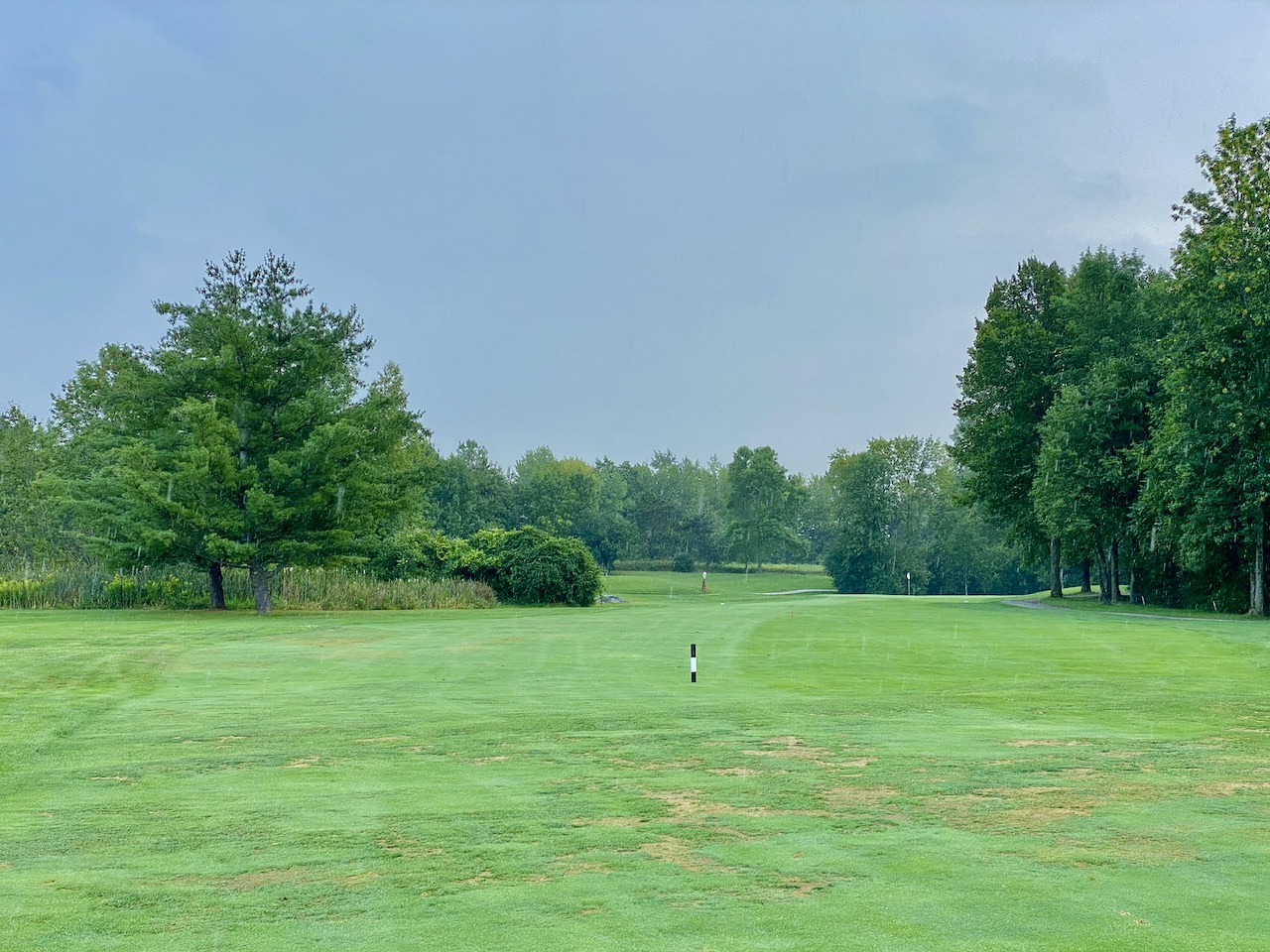 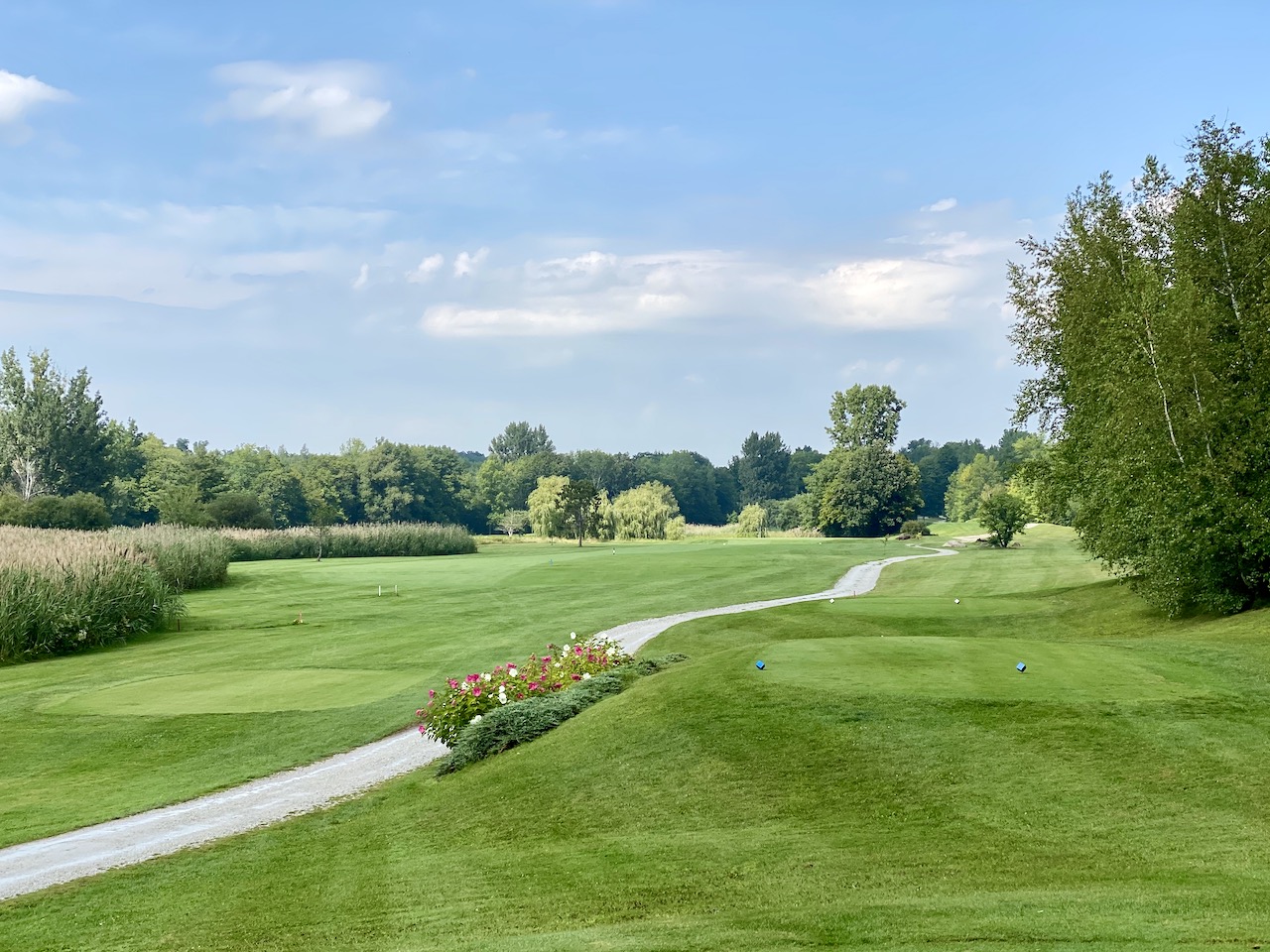 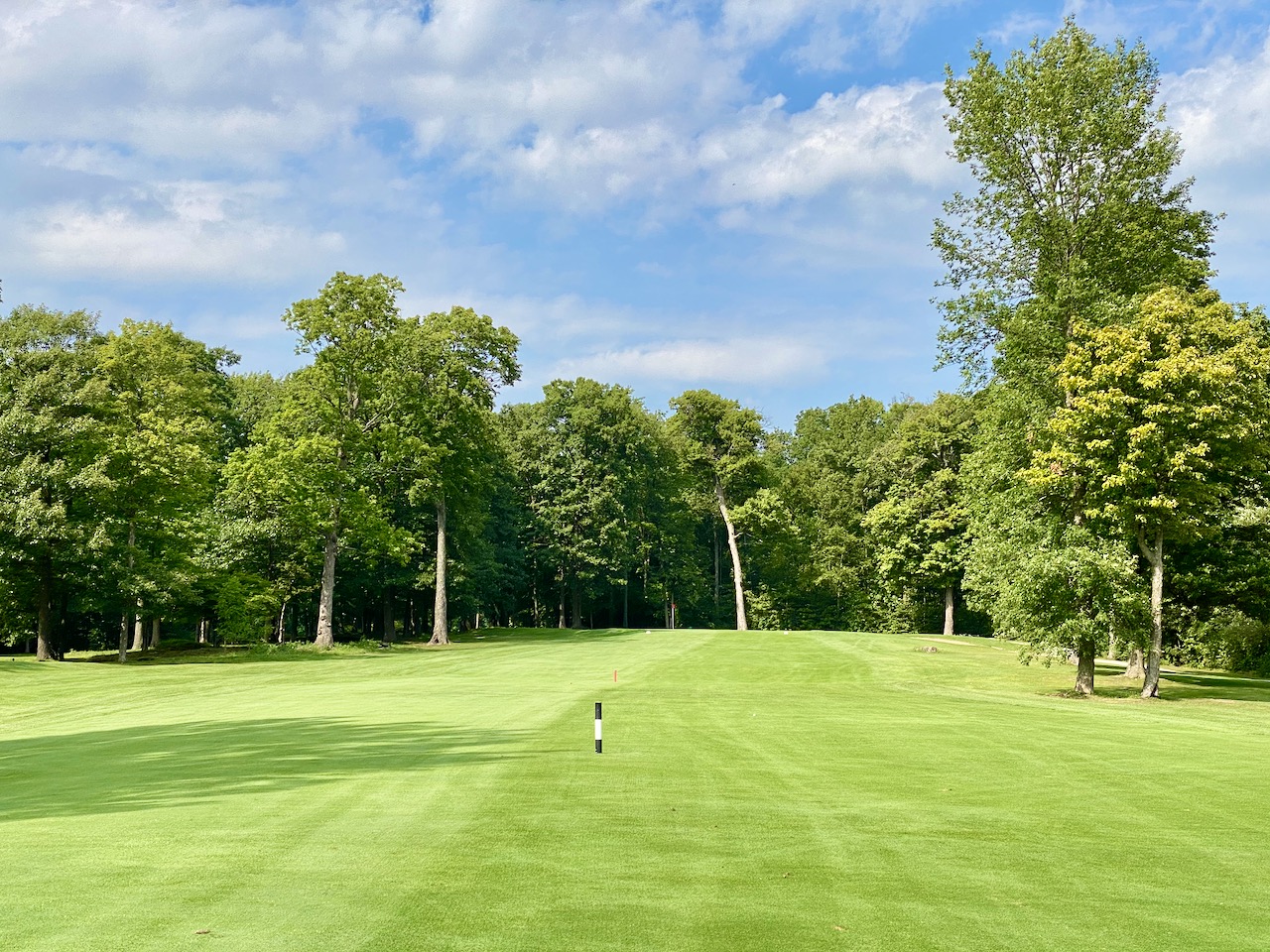 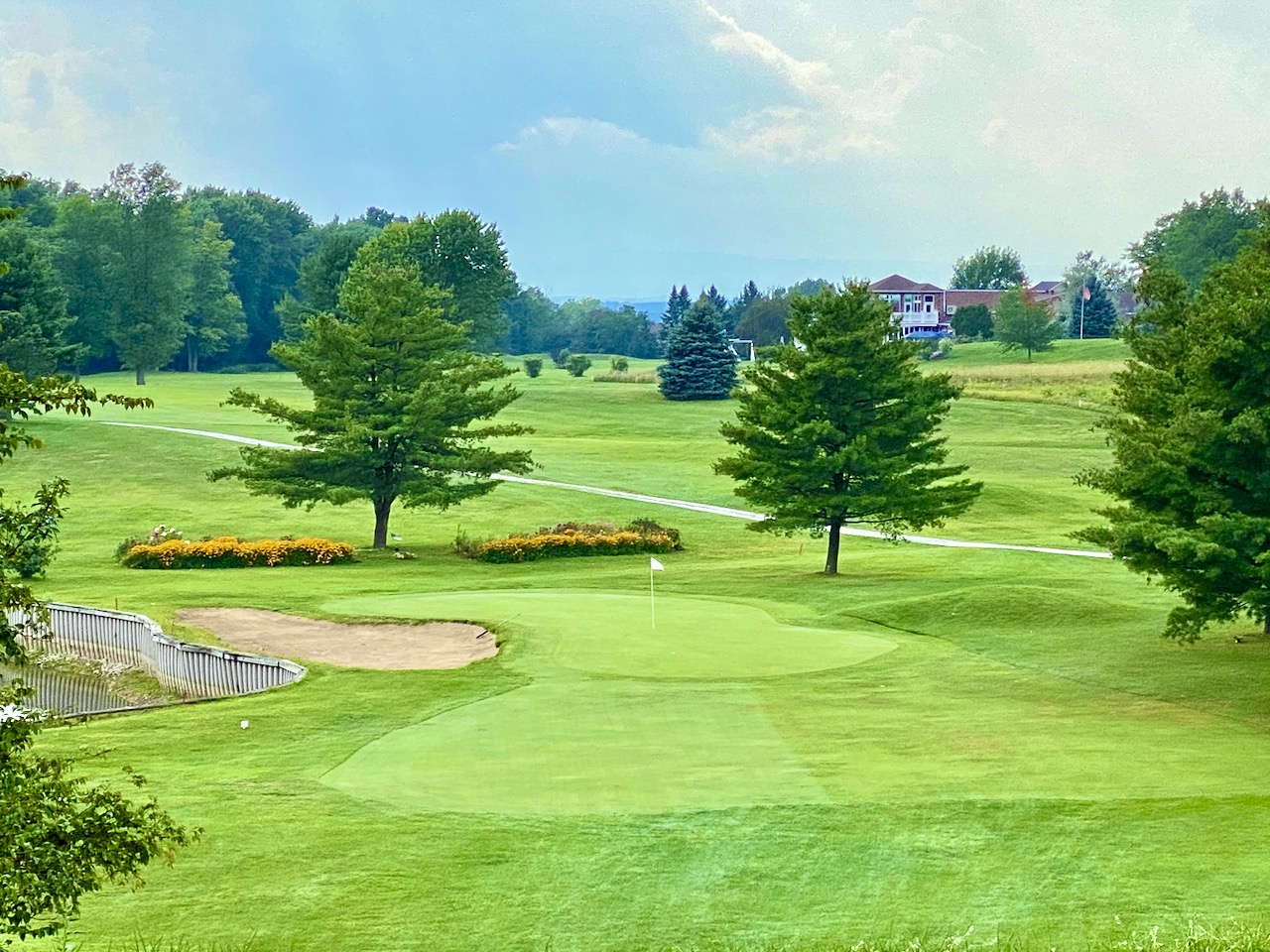 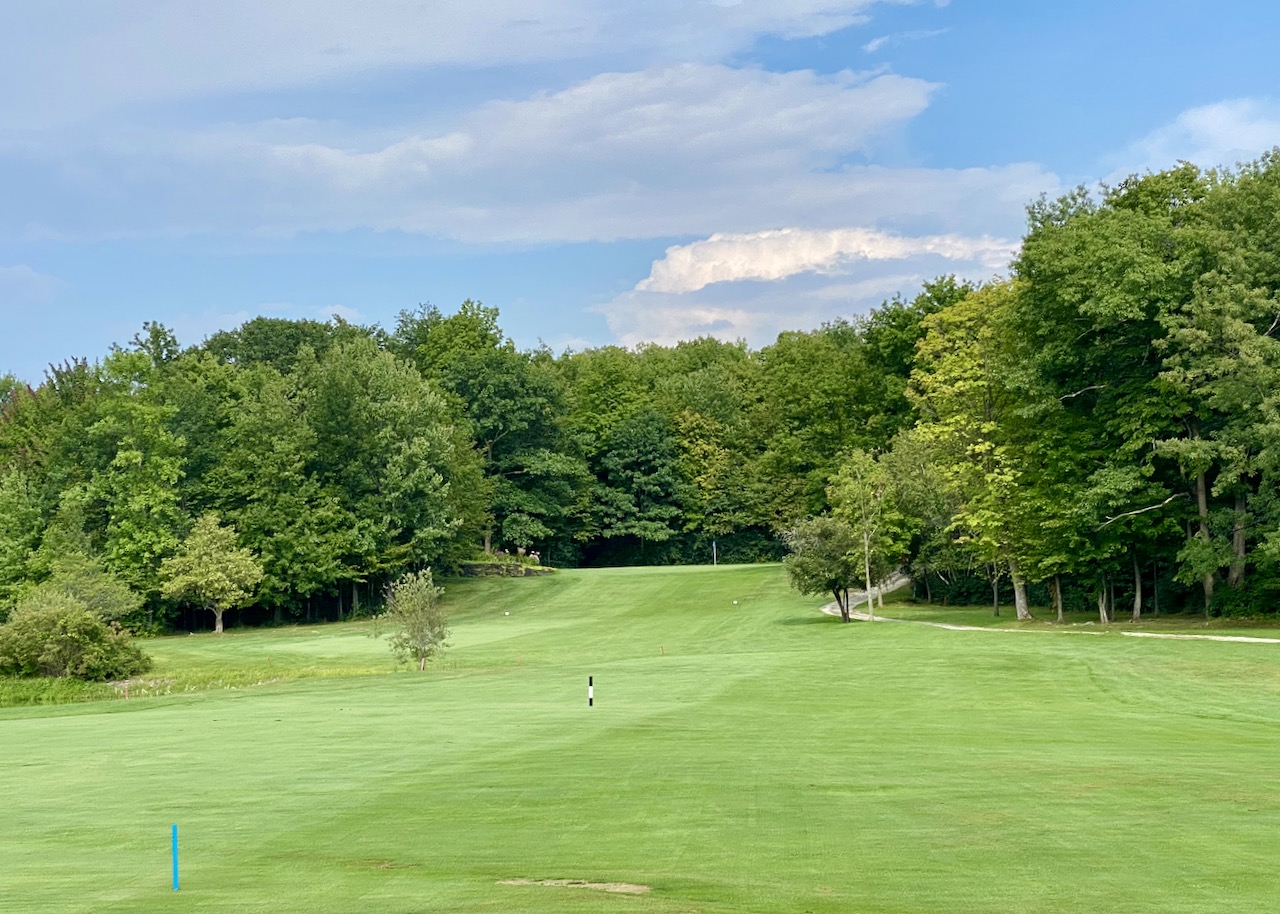 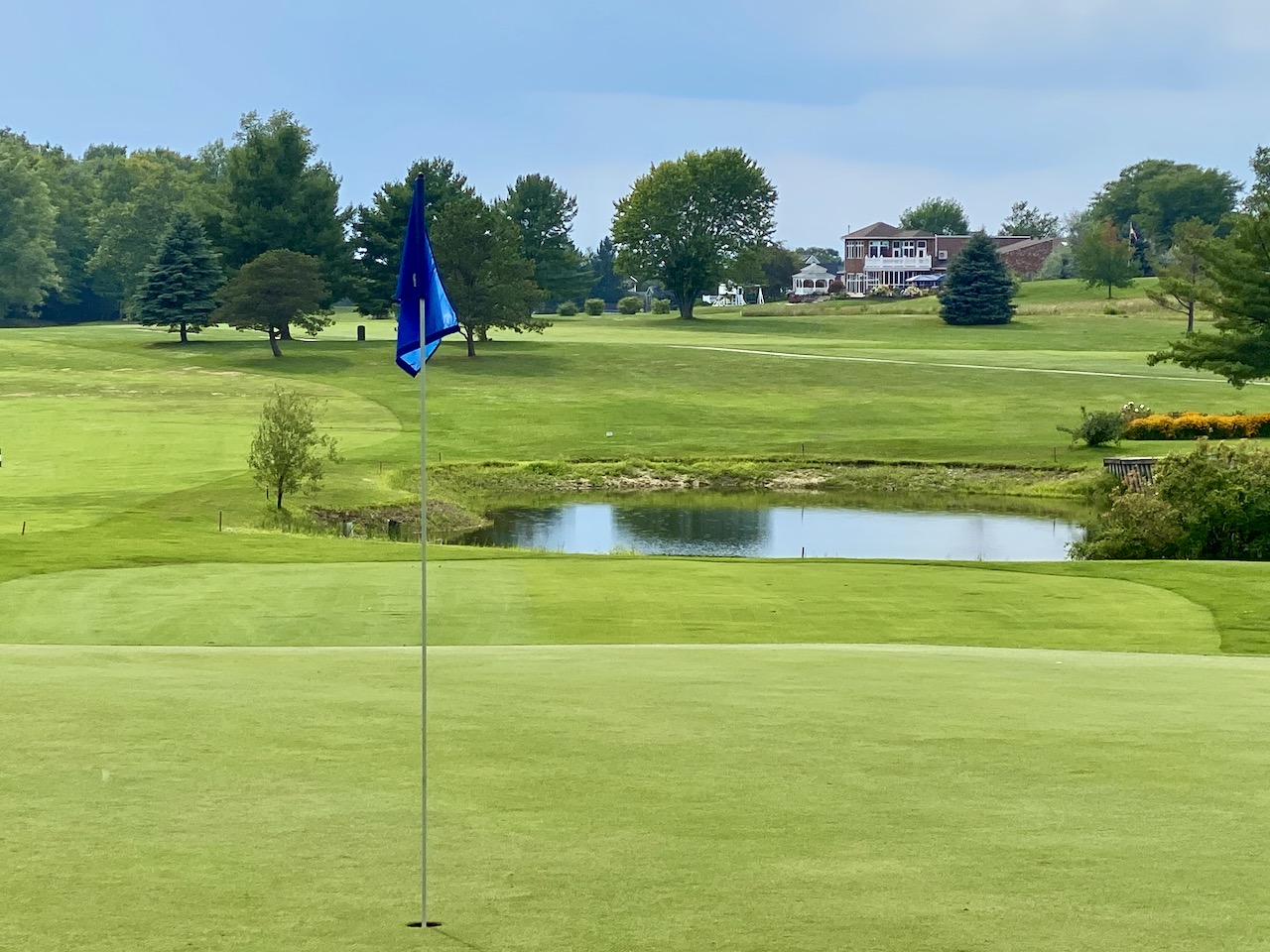 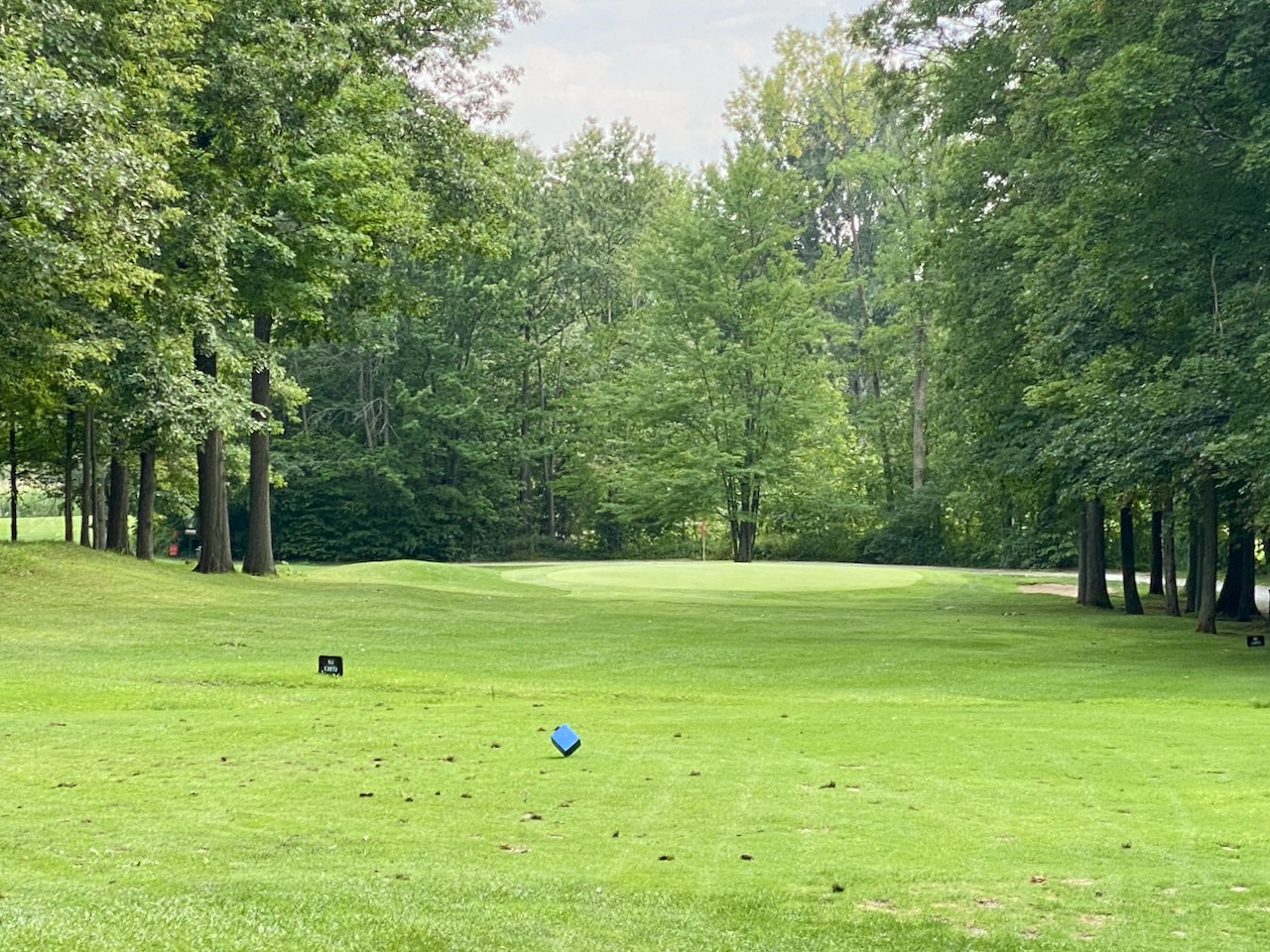 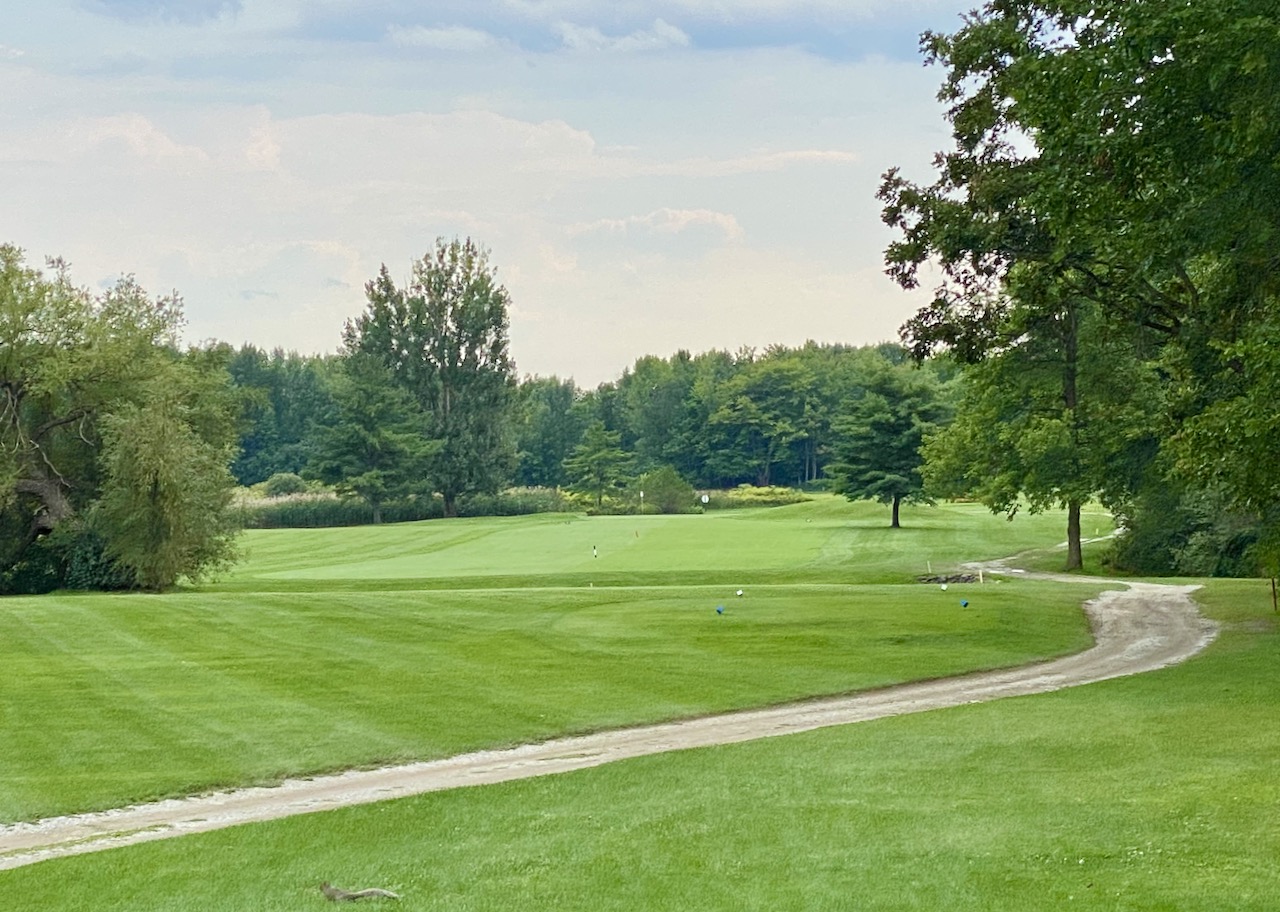 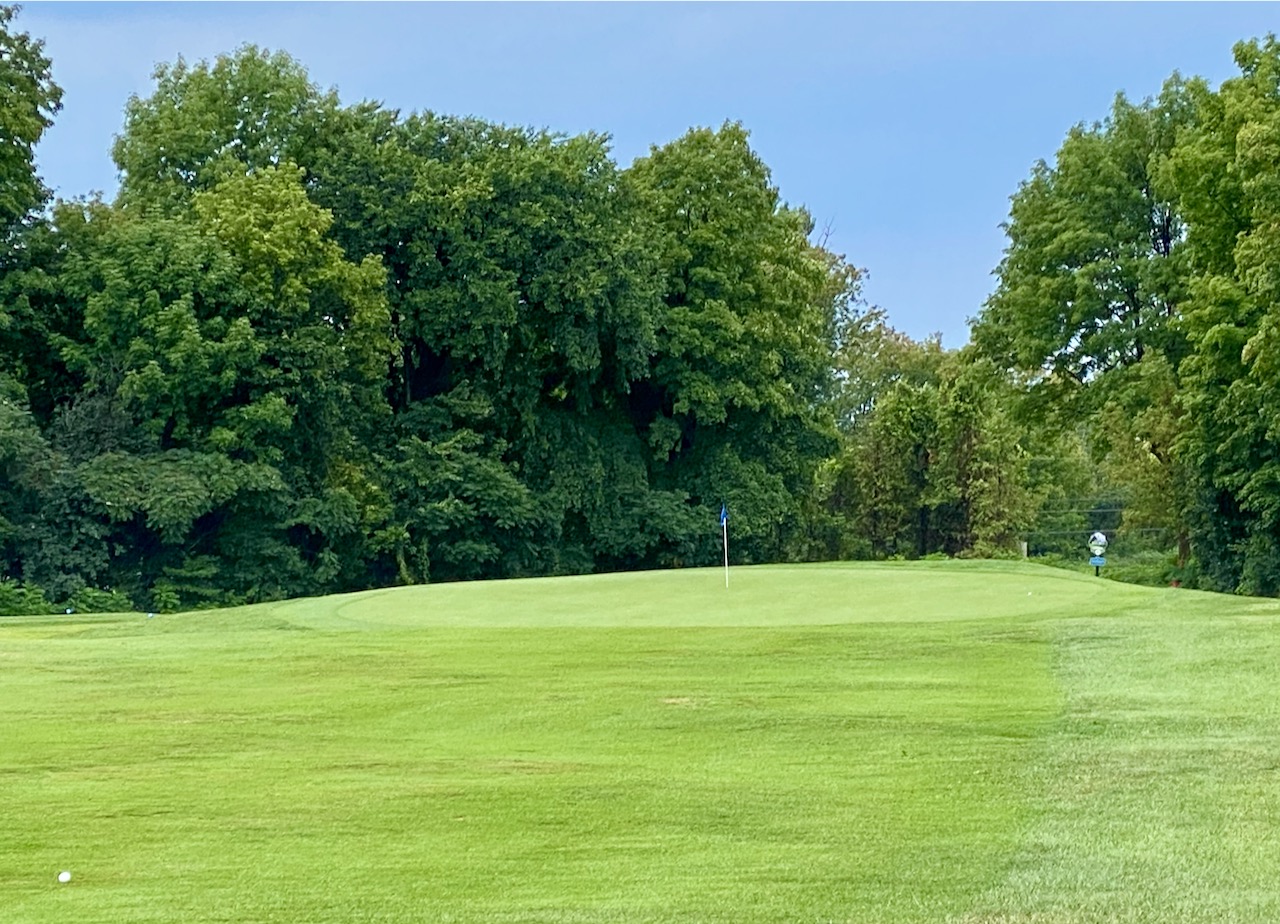 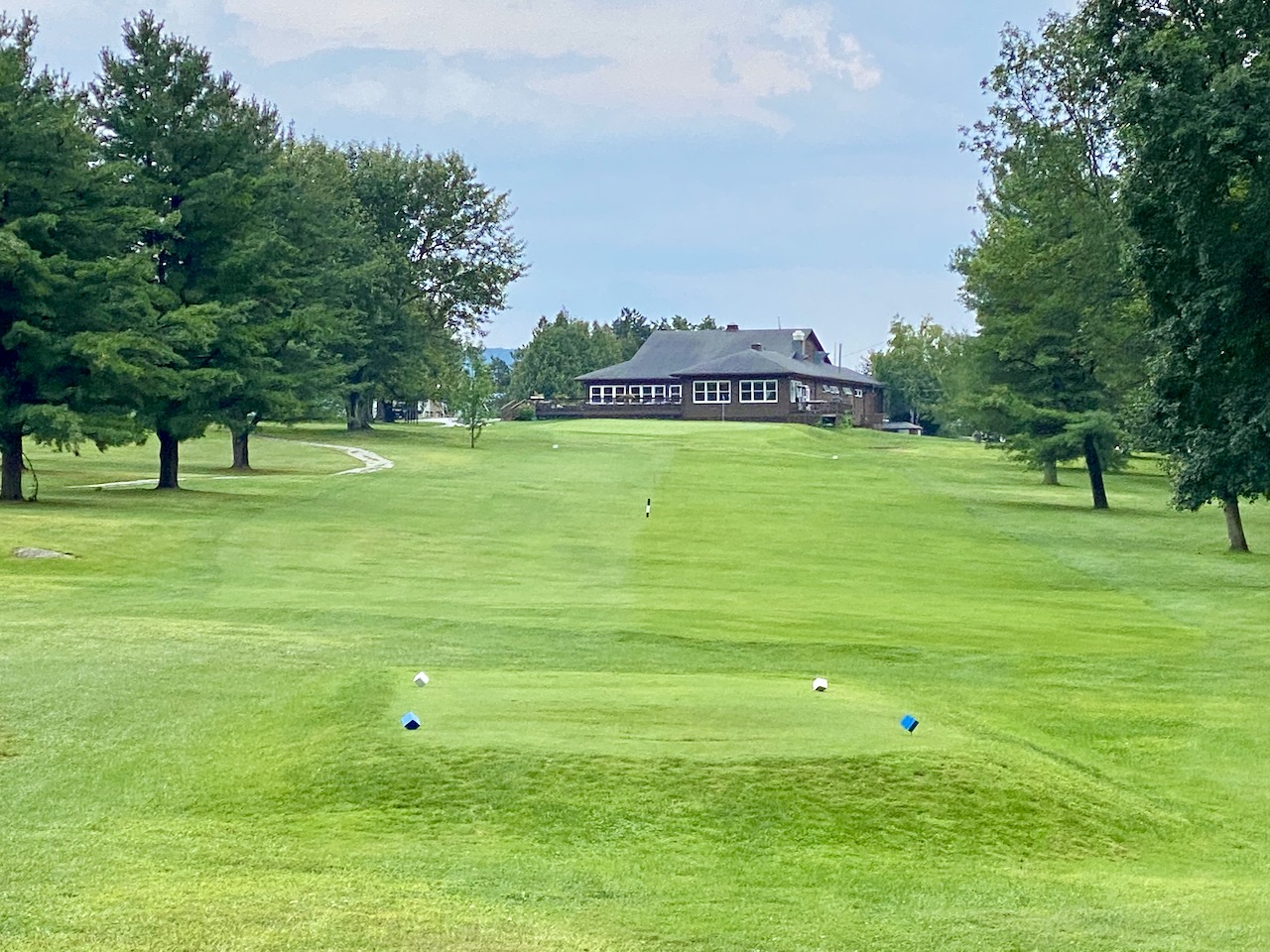 Play at Champlain Country Club in Swanton, VT, is an all-day event, but not because play is slow; after a half dozen rounds there over the years, I have never played in more than four hours.  You can spend the better part of a day at Champlain enjoying 18 holes of golf, which always tends to lead to a post-round libation or two which more than likely then leads into lunch or dinner.  The food is very good, and at dinner time you will share the dining room with locals in non-golfing garb, obviously there for the solid tavern grub at fair prices.

The golfers are as well tended as the diners.  The layout is fair and fun with enough challenges over the 6,200-yard layout to make you take notice and dither over club selection .  At that length, the layout’s shortish nature shows mostly in the par fours and fives (although one par 3 is a ball buster, literally – see below).  On the day I played with my son-in-law and Champlain golf professional Mike Swim’s future son-in-law, two long-hitting 30 somethings, the soon-to-be-married lad drove his ball to pin high on the 303-yard 10th.  The longish rough at greenside thwarted his attempt at a short birdie putt (but he canned the 20 footer showing nerves of steel in a young man a few days from his wedding).

The course originally opened for play in the early 1920s and it shows many of the classic touches of that era.  The design is attributed to Duer Irving Sewall whose only other published credit is for Lake Mohawk Golf Club in New Jersey.  (Note:  My son Tim, editor of the golf architect bio pages at Golf Advisor.com, believes the front nine may have been designed by Willie Dunn Jr. before 1920.  He played Champlain before his sister’s wedding there a year ago and, looking at the contours around the green on the mild 18th hole, determined there once was a horseshoe shaped bunker around the entire green except for the entry point at the front.)  According to some online sources, the entire layout was updated in the 1990s by Graham Cooke who remained true to the architecture of the earlier era. There is little “modern” about the design of the course, and that is a good thing, in my opinion.

The shorter par 4s, for example, display subtleties on and around the greens that toughen them up.  It seemed to me that the shorter the holes, the more difficult the greens and the tighter the bunkers to the putting surfaces.  There aren’t many fairway bunkers at Champlain, and landing areas for tee shots are generous, sometimes in the extreme.  But as if to compensate, greens tended to be smaller on those holes with the wider fairways.  And on the shorter par 3s, I detected a bit of crowning on the greens, a la Donald Ross, making a second-shot chip just as likely as a putt.

Not every drive is a grip it and rip it affair, though.  My favorite hole is #16, a short par 4 that makes a 90-degree right turn about 200 yards from the tee box.  The safest play is near the elbow of the dogleg, but that leaves a 140-to-150-yard shot through a fairly narrow chute of trees to an elevated green.  The risky but rewarding play off the tee is to cut the dogleg with a left to right shaped 220-yard drive which has the potential to leave a wedge into the green.  (The stand of trees at the crook of the dogleg seems too high to loft a drive over.)  If you don’t place your drive within an area about 30 yards wide in all directions, you will have trees blocking your path to the green.  It is a simple looking but devious little hole.

A couple of the par 3s meet the devious – one might say “diabolical” – definition depending on pin position.  The 7th plays from an elevated tee box to only 167 yards from the back tees; the elevation takes two clubs off the distance.  The green is an amoeba that runs from front right to rear left, hooking around a bunker along most of the left side; the bunker separates the green from a pond which comes into play only for a severely pulled or hooked shot.  When the pin is anywhere from middle of the narrow green to the back, it looks as menacing as it plays.  The tendency is to aim for the front of the putting surface, if you want to avoid disaster.  (I have played the hole when the pin is up front, and I’d guess it is at least ½ stroke easier than with the pin at center to back.)  A grassy knoll of rough sits just off the green on the right side to catch any shots just a little offline.  It is an excellent par 3.

The other notable one-shotter is #14, 198 yards from the tips and playing every bit of it and then some since the wind almost always blows in from Lake Champlain just a few miles to the west.  In relation to par, this is one of the two longest holes on the course (the other being the par 5 next hole at 560 yards).  But what makes the par 3 especially difficult is the green, larger than most on the course and severely two-levelled, the top level comprising only about ¼ of the green’s total area.  When the pin is on top, it is nearly impossible to get close.  Hit too much club and you are down the back slope with an impossible-to-stop chip from rough; count on your third shot then being a 70-foot putt from the front of the green up to that second level.  The correct play off the tee is to the lower level, a take-your-medicine shot if ever there was one but the only real chance at par on the toughest hole on the course (although the scorecard says it is the 14th hardest hole which is way off when the pin is up top).

I have played Champlain virtually every one of the last six years, and I can testify that golf pro Mike Swim and Superintendent Chris Saylor have supervised the consistent improvement of turf conditions and added some flourishes to the landscaping that has made the course as friendly to the eyes as it is fun for the golf game.  Splashes of color – a lot of yellows and oranges I noted during my late August round – break up the typical sea of green.

Swim, who runs the bar/restaurant, is ever present out on the course and in the clubhouse, making sure things are going smoothly (I was tempted to write “swimmingly”) and everyone is having a good time, especially in the clubhouse tavern where golfers and locals come to eat the hearty food and drink some of Vermont’s famous craft beers.  It cannot be coincidence that the restaurant is called Swimmers. There is no pool at this golf- and food-centric country club.