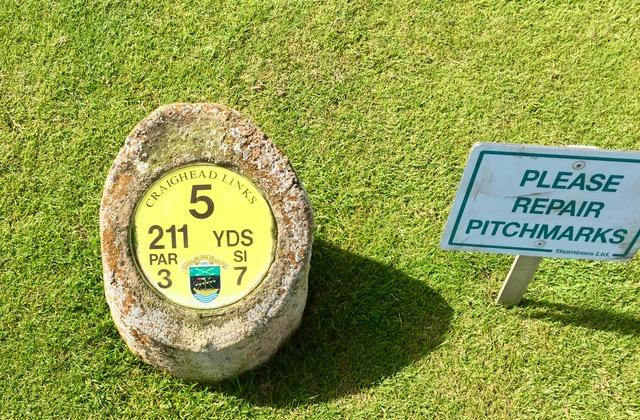 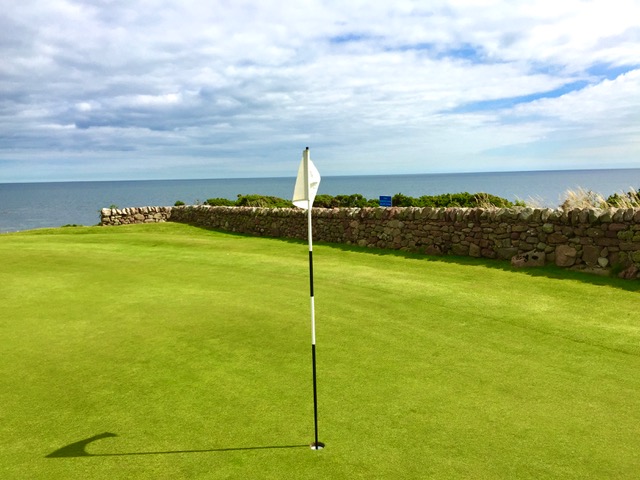 The wall behind #10 at Craighead can be friend or foe. 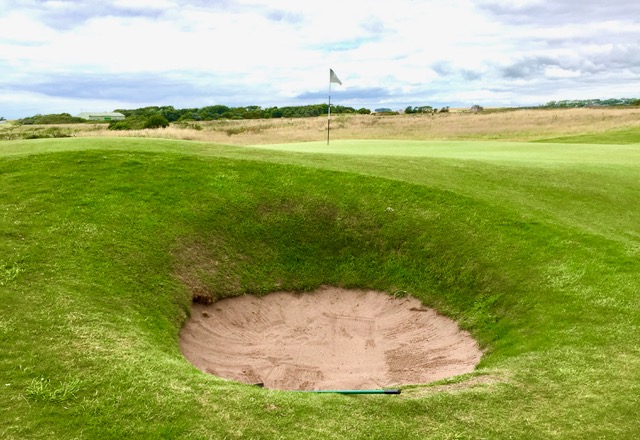 Craig was designed by a modern architect, Gil Hanse, and opened in 1998, but there are many nods to classic Scottish design. 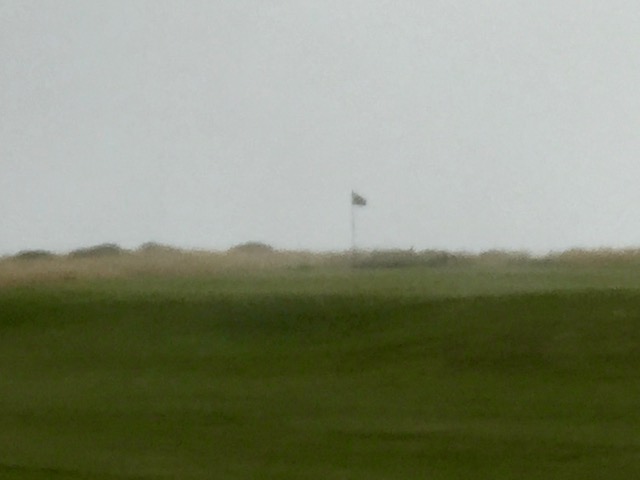 During one round on Craighead, my Scottish host pointed to a dark patch in the North Sea and said “We’ll feel that in about 10 minutes.” Sure enough a squall surrounded us in 10 minutes…and was gone as fast as it arrived. 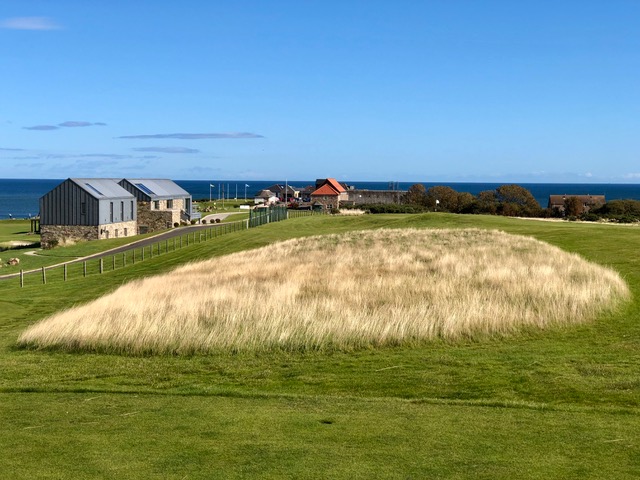 Balcomie Links to the left, Craighead to the right, the North Sea beyond and a patch of heather in between. 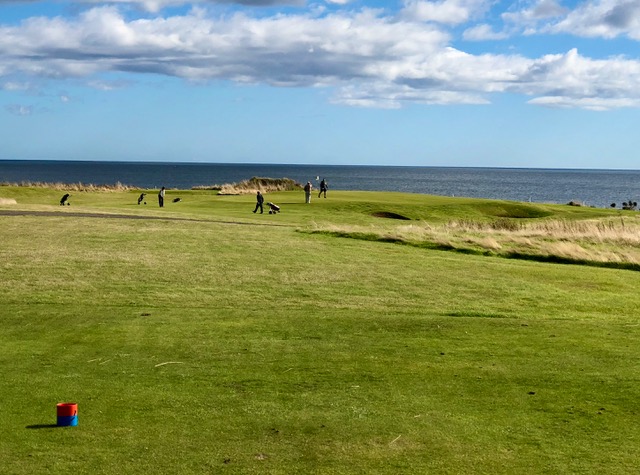 It’s Scotland, and everybody walks. And yet, somehow, every round is completed in 4 hours or less. 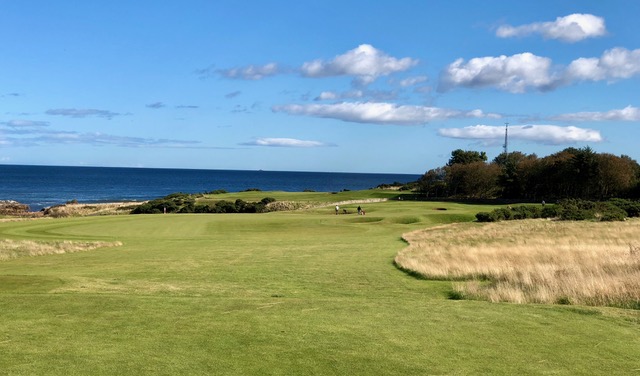 Between the heather and the deep blue sea is a lot of welcoming green that isn’t named gorse. 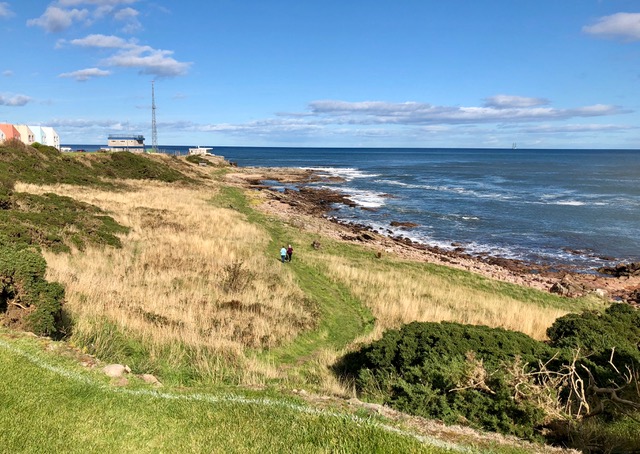 A walking trail along the Fife, Scotland coast extends more than 100 miles and passes beside both courses at Crail. 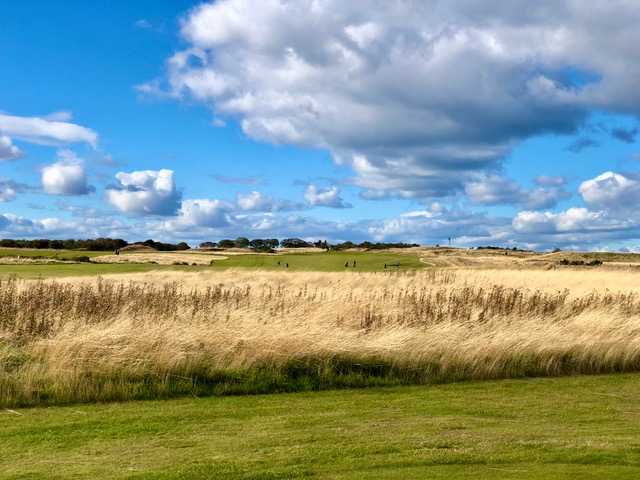 Heather is a beautiful framing element along the Craighead Links, but you do not want your ball anywhere near it. 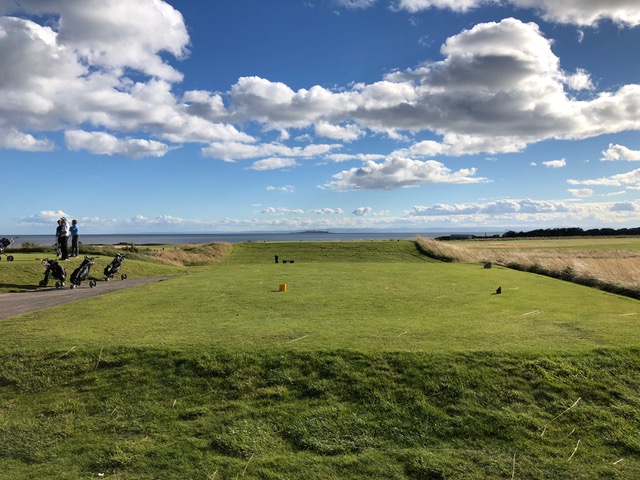 The 194 yard 17th looks innocent enough, but the ever-burdensome prevailing winds add to the degree of difficulty. On the card, it is rated the 6th toughest hole on the course, unusual for a par 3 but not surprising once you have a go at it. 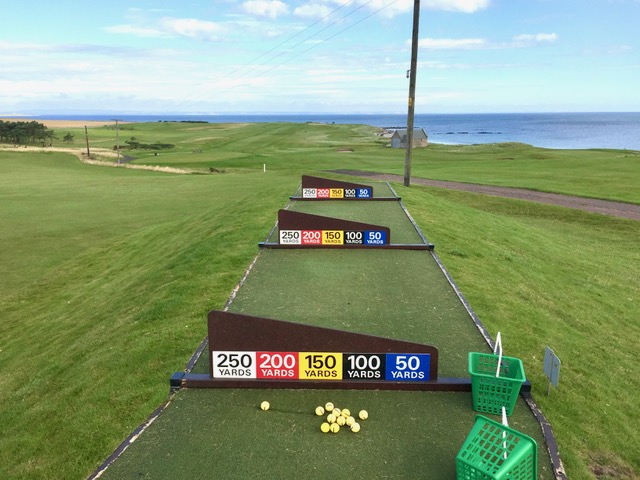 A practice range with a view. 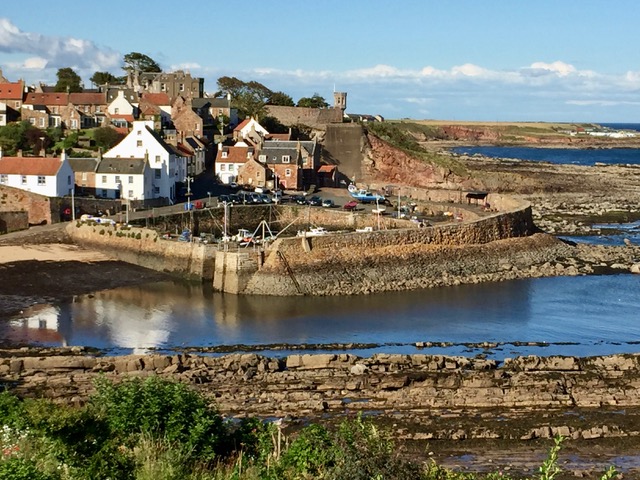 It is a cold and windy February day in Connecticut as I write this, the kind of day when any self-respecting golfer turns to thoughts of the best Florida or Hawaii or California golf courses he has played on warm and sunny days.  Call me weird, but my thoughts today are squarely on a windy, often rainy stretch of linksland about nine miles from St. Andrews in Scotland.  The Crail Golfing Society was formed in 1786 at the Golf Hotel, a place you can stay at today.  At 334 years old, Crail is the 11th oldest golf club in the world.  In 1894, the club members, who had been playing on the links turf since the 1850s, commissioned Old Tom Morris to lay out Balcomie Links, today regaled by serious Scottish golfers as one of the best in the golf-abundant country.

But today I am thinking specifically about Balcomie’s companion, Craighead Links, built a good 104 years after Balcomie.  Crail, by the way, is at the same latitude as Newfoundland, and though that might imply totally unplayable conditions this time of year, I checked on this February day and temperatures were in the mid 40s, no colder than in Connecticut (and a lot warmer than in Newfoundland).

Craighead, designed by Gil Hanse and opened in 1998, is a marvel in that it feels as if it was laid out a hundred years ago on the swirl of land abutting the North Sea – the Firth of Forth, for purists.  It certainly seems no less ancient than neighboring Balcomie.  Hanse retained some of the former farmland’s old stone border walls, including one that crosses a par four hole just about where a good drive should come to rest, and he didn’t touch much of the heather and gorse that has dotted the landscape for centuries.  Like its sister course, every hole at Craighead has at least one peek at the North Sea, giving Crail the distinction of being one of the only two-course clubs in the world with views of the sea from all 36 holes. (Members say it is the only one, but neither they nor I have played every 36-hole seaside club.)

Hanse is best known for his design of the Olympic golf course in Brazil, but whereas that effort was made on fairly level land, Craighead is more of a roller coaster, with some elevated greens, swooping fairways that often tilt to one side or the other, and few nods to modern design.  The greatest design difference is in the use of bunkering – plentiful in Rio, more sparing at Craighead and, for the most part, with an indigenous look; not exactly the sheep-burrowed looking bunkers of Balcomie or the Old Course at St. Andrews, but the steep fronts and locations nestled into the sides of the greens are an obvious nod to classic Scottish architecture.

Of course, this being the Scottish coast, the most challenging element – and the most annoying – is the weather, specifically the wind.  Combined with an almost certain daily rainfall of some kind, Craighead plays every bit of its 6,566 yards from the regular tees and considerably longer if the wind is blowing.  My favorite holes are those that move right or left, like the par 4 10th, which is probably as close as Craighead comes to a modern hole.  A short dogleg right at 299 yards, the green is small and, like many modern short two shotters, features an abundance of bunkers to fly over on your approach shot.  (Classic short par 4s tend to put much of their difficulties around and on the greens; see Ross, Donald for evidence.). The bunkers force a firmly struck shot to a firmly turfed green, but the back edge of the green is rimmed with one of those stone walls literally a foot behind the back of the putting surface. Hit your approach a wee bit too far and you may be whacking the ball backwards against the wall to get it close to the pin.  (Or hit it just far enough past the pin, and it might bounce back toward mid green, assuming it doesn’t catch a sharp edge of a jutting stone slab.) The following hole, #11, another par 4, features a different, higher stone wall that crosses the fairway about 220 yards out.  At 354 yards, a well struck fairway metal leaves only a short iron to a green, but the shot is entirely blind, only the top of the flag showing above the wall.  There are plenty of other idiosyncrasies and surprises throughout the round.

Crail is especially popular with Europeans, and during my visits I have played with Norwegians, Spaniards and Englishmen.  You come to understand the stand of flagpoles with a United Nations array of flags beside the first tee.  Beyond those flagpoles is a drop-dead gorgeous panorama of the sea and a few of the holes you can’t wait to play.  Crail is a special golfing mecca, and yet when I mention it to my fellow Americans, I get mostly blank stares in return, even from those who will regale you with stories of Troon and St. Andrews and the other notables.  That surprises me, but as someone who became an overseas member of the club five years ago and tries to make an annual pilgrimage there, I am content with it being my little secret.

Oops.  What have I done?