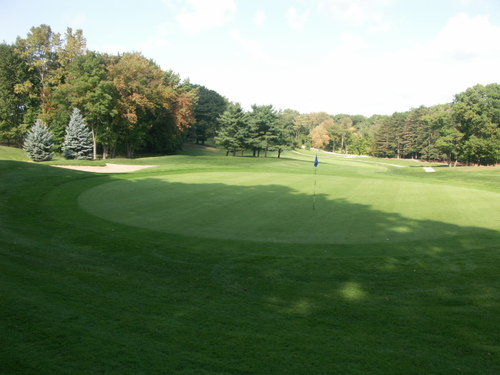 2nd Green, down the fairway They never were sand greens like at Pinehurst, but the roundness of this green gives you that impression. 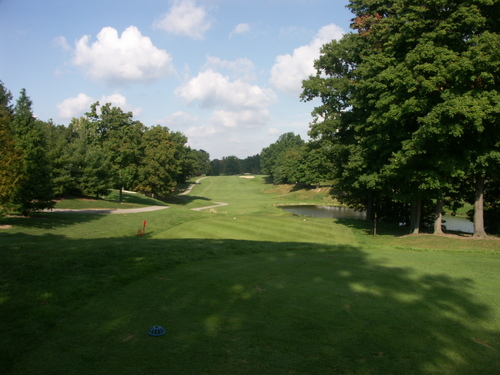 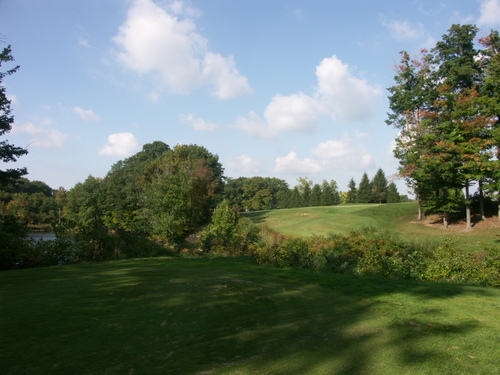 8th hole, tee shot Even if this weren't a hole on the course, I would be tempted to tee one up and see if I could reach the top of the distant hill. Such a hole reminds one of the origins of the game. 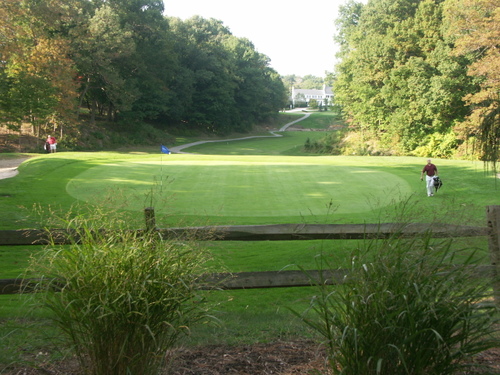 10th green, looking back up the fairway Manikiki GC, Cleveland, OH Walking off this 10th green to the 11th tee, you look backward up the canyon fairway toward the stately mansion that serves as the clubhouse. Remember this photo as you will be hitting blind to the green. 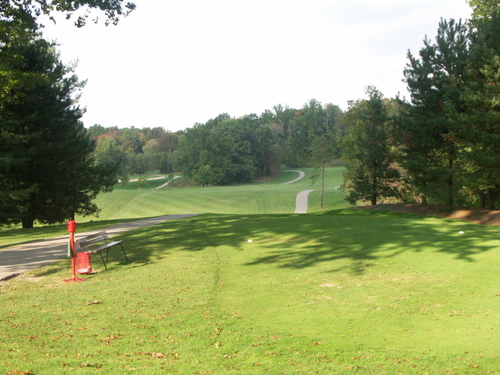 12th hole tee shot A simple, soft dogleg. You really are in the heart of the course on this tee. The 16th green is visible on the left. 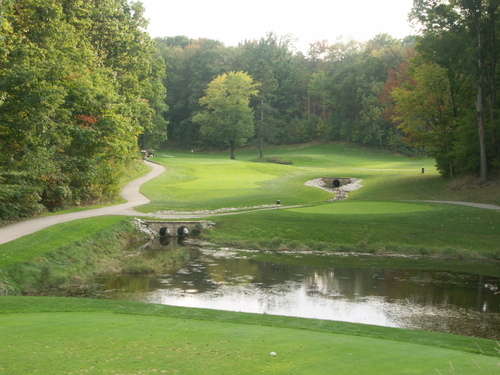 15th hole - Infamous Par 3 This has been voted at Cleveland's best par 3 hole for many years. At 211 yards from the back tees, the woods to the left and water hazard to carry and avoid on the right of the green make this a real knee-knocker for most golfers.  What a beautiful part of the course. It is difficult not to just linger here, or play it more than once.

18th hole, across the green This is a short but great finishing hole. The canyon creates a blind tee shot - you can barely see the flag on a back pin placement - so don't make a wager unless you KNOW this green. When the lawn in front of the clubhouse is full of spectators above you, this is a grand venue for a tournament.
Previous Next

It is not intentional but a part of my nature. I love classic golf courses.

In considering what course to review next (among the more than 300 courses I have played in the last 4 years), Manikiki came to mind.  My friends know I am partial to Donald Ross, just as I am partial to Ellis Maples, Perry Maxwell, and Stanly Thompson as golf architects.  But selecting Manikiki for OTBCP was not because of its classic nature or its Donald Ross pedigree. Located in Cleveland, Ohio, Manikiki is clearly it is off the beaten cart path.

Manikiki is one of 6 courses owned and operated by the Cleveland MetroPark system, park of a beautiful necklace of greenways, forests, and rivers that is a recreational haven to the city's urban-weary inhabitants. While Big Met may get most of the play among the six tracks, Manikiki is likely classy, elegant lady of the group.  It became the property of Cleveland Metroparks in 1944, when Janes and Fannie Brown sold it for a dollar on the condition that it remain a golf course in perpetuity. The original mansion still serves as the pro shop / clubhouse, sitting in stately fashion behind the 9th and 18th greens.

Manikiki, a native American word thought to mean "maple forest," is an unusual design for Ross in that the route returns you to the clubhouse after the 9th. I don't know the year it was designed or built, but it feels older than of the era when routing courses back to the clubhouse became popular and economically driven. Perhaps Ross deliberately brought the golfer back in after nine holes because the weather in Cleveland lends itself to truncated rounds during shoulder seasons.  The play of the course does not suffer in any way by this layout.

I discovered this course while attending a training session at the United Church of Christ headquarters. The sunny, warm spring weather beckoned that I explore the golf offered in a town known better for its professional sports teams, the Rock and Roll Hall of Fame, and lake effect snow.  Golfing at Manikiki is a gentle walk in the park, with enough bite to keep me alert. Mature woods and creeks gave me sufficient direction as to where to hit the ball, and the small greens taunted my shot-making skills. It's easy to get discouraged about missing the green surface and yet I was just 30 feet or so from the cup. Up and down is the order of play, whether it is from the green surround or bunkers. This is a course I truly enjoyed walking despite the up-and-down between some of the holes.

The only "problem" with the course is that the bunkers have been altered from their original design. Instead of maintaining the grass faces and flat bottoms, the faces have been flashed with sand and the bottoms scooped and curved.  Some of the original bunkers survived  the zealots on some greens committee, but not many.

If you travel to Cleveland, Manikiki Golf Course needs to be on your "must play" list.