It's hard to think of a golf course that hosted one of the four majors as being "off the beaten cart path."  These courses are typically on a golfer's bucket list:  Pebble Beach, Winged Foot, Whistling Straits, Oakmont, Bethpage Black, and many more. 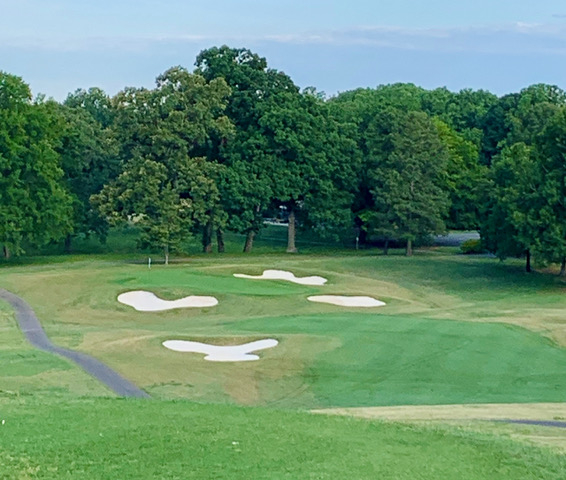 So with that as a preamble, how many of you remember Tanglewood?  Or have even heard of Tanglewood?  Tangle-what?   No, Tanglewood, part of Tanglewood Park, a municipal park managed by Forsyth County Parks and Recreation in Clemmons, North Carolina, just west of Winston-Salem.   (Editor’s note: The parkland was donated in the early 1950s to the local county for recreational use by Mr. and Mrs. William Reynolds; he was the brother of the tobacco magnate R.J. Reynolds.) The Champions Course was designed by Robert Trent Jones, Sr and opened in 1958.  More to the point, it hosted the 1974 PGA Championship, where Lee Trevino edged Jack Nicklaus (again), shooting just four under par in winning, giving an indication of the difficulty of the course during the tournament.

Relatively few people remember Tanglewood's one foray into major golf hosting duties.  And since it was 46 years ago, it's easy to forget; however, it's the same course, with the same clubhouse and same layout.  If you're interested in seeing some of how it looked then, watch this clip of the 1974 PGA Highlights.

Nuts and Bolts of Tanglewood

Tanglewood Park in fact has two courses — the Championship Course and the Reynolds Course, a narrower and, from the comments from various people at the course, more difficult course for amateurs.  At some point I plan on getting back and playing the Reynolds Course in order to compare the two.

I played on a warm Wednesday in early June, and since the twosome I was supposed to play with had not arrived at tee time, I was sent off as a single (and in this era of every tee time being filled, when was the last time that happened?).  Therefore, for the first nine holes, I had time to take a few photos, take note of the surroundings, and imagine how Jack or Lee or Johnny or Arnold would have played this particular hole.

Tanglewood is a classic parkland course, with lots of trees, although most are far enough from the fairway that only the most misdirected shots would find them.  Being an RTJ Sr designed course, it has more than its share of bunkers.   The view from the first tee in the accompanying photo gives an indication of the bunkering I would see at practically every green.

Tanglewood has very friendly fairways.  A couple of shots I hit and thought, "uh oh, that's probably in trouble," only to reach the ball and see that it was still in the fairway.  A few fairways have bunkers at landing points but, again, they were far enough from being in play that only a severely off-center strike would end up in one.  I was making assumptions as I played, and one was that the course set-up for the PGA Championship probably narrowed the fairways and routed them more toward the fairway bunkers, causing them to be much more in play than what I experienced. 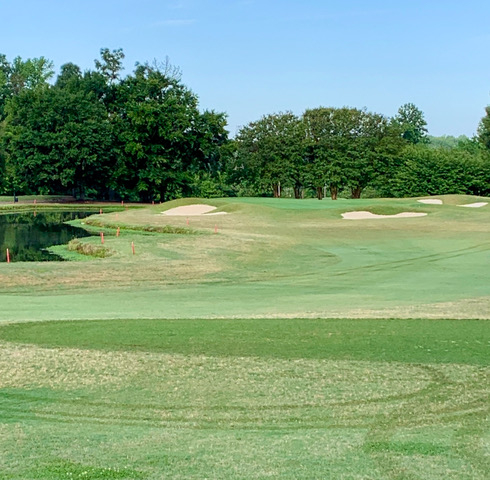 As noted earlier, the greens were heavily bunkered.  Most had at least three bunkers, some as many as six.  But the sand was in really good shape.  Having real sand in the bunkers has been a rarity during the covid-19-protocols-therefore-no-rakes-to-be-found era we are in.  For the two I managed to hit, I was out with little trouble mostly because I had decent sand to play from.

The greens are Bermuda grass, having been switched over from bent grass just this past year.  My putting was nothing to write about, as I never figured out the speed of the greens, and I attribute at least some of that to not accounting for the grain from hole to hole.  However, almost every green has swales and undulations, so putting was no picnic, Bermuda grain notwithstanding.

Water only comes into play on a couple of holes, the most notable being the par-3 third where it is to the front and left of the green.  A pin placement on the left side would cause some hard decisions on the tee — thankfully the hole was front center when I played. 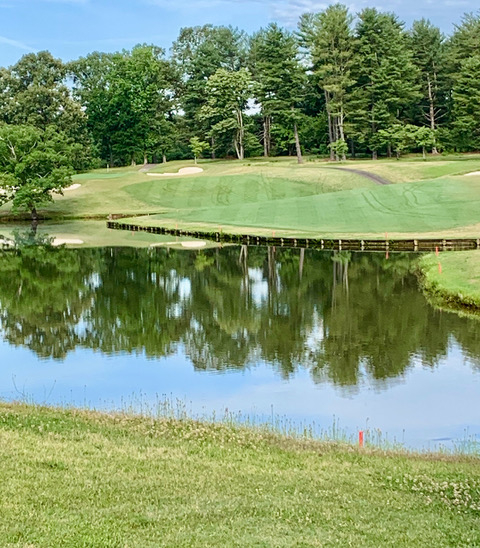 There are a couple of really short par-4s, where even I hit 3-wood from the tee.  The downhill, blind tee shot 10th is an example.  It was 3-wood, 9-iron for me.  It was probably a risk-reward par-4 during the PGA, although the risk isn't worth it in my opinion.  The fifth hole, with water on the left (see photo), was a driver and eight-iron for me, so for a professional it might be an iron off the tee to set up a position shot for the second shot on the severe dogleg left with water on the left.

Tanglewood is a fun, enjoyable course that is amateur-friendly.  As with most courses, playing from the appropriate tees will determine how challenging and enjoyable it is.  I started on the blue tees, and for the first two holes that worked out okay.  Then I got to the third, and it was a 200-yard shot over water.  That is when I noticed the blue tees were over 6,600 yards — a bit out of my wheelhouse.  Therefore, I backed up to the white tees, and while they were actually a little short, I wasn't hitting long irons into every par-4; it was the right move. 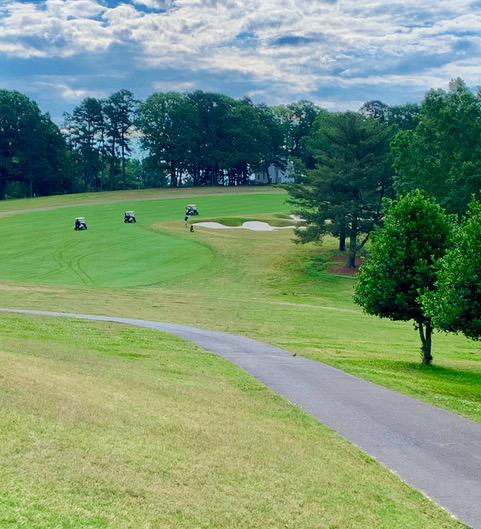 One of the defenses was elevation change.  Both the 9th and 18th holes were long, uphill par-4s with elevated greens.  It is a rolling-to-hilly course although with very few sidehill lies.  Almost all are uphill or downhill.

It isn't often someone can play a course that hosted a major championship and still say it was enjoyable.  Many of the holes are very familiar from seeing them during the 1974 telecast, and it's easy to imagine being in the same place in a fairway wondering if how I played the hole is how Tom Watson played the hole.

Tanglewood is slightly less than two hours from my house in Charlotte, and I am looking forward to going back.  If you're ever in the central North Carolina region, turn off the beaten cart path and book a round at Tanglewood, host to a PGA Championship.