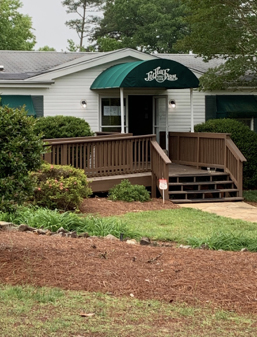 It’s not a masterpiece.  Not a revelation.  Not a dump.  It’s definitely a unique — my wife mentioned "quirky" — golf course.

If any course meets the definition of "off the beaten cart path," it's Tot Hill Farm, one of Mike Strantz’s seven courses he was able to design before his too-early death of cancer at age 50.  I live in north Charlotte, and Tot Hill Farm is in Asheboro, a little more than an hour's drive from us.  Asheboro is about 90 minutes from the golf mecca of Pinehurst, and a good 30 minutes south of Greensboro.  In other words, you have to want to go there.  This isn't a "We're in the neighborhood, let's play it, too" course.

I became a Mike Strantz golf course architect fan when I played his Caledonia Golf and Fish Club course on Pawley's Island, SC with friend and fellow golf blogger Larry Gavrich (founder and editor of OffTheBeatenCartPath.com).  It is a fun course.  There are bailouts and places that even an amateur who is battling driver issues, as I was at the time, can still play from.  As any well-designed course does, it rewards better-placed shots with more favorable angles and/or closer approaches to the green.  But wayward drives can still be found and played.  And as a bonus, it has one of the coolest entry drives of any course this side of Augusta National.  I'd play Caledonia again in a heartbeat (Larry, are you listening?) (Editor’s note:  Yes, Brad, I am.)

Tobacco Road, in the Pinehurst vicinity, has been reviewed hundreds of times and is arguably Strantz’ most famous/infamous design.  The consensus?  There is no consensus.  Golfers love it or hate it. (I have not played it so no opinion here.)  But with Strantz’ reputation at a possible all-time high, and having one of his course designs within a figurative 5-iron from the house, my wife Alice and I booked a round on Memorial Day.

As with most every course in North Carolina during this pandemic era, practically every tee time every day on every course is booked.  We were paired with Mark and Scott, who didn't know the course any more than we did.  So we were all on equal golf shoe footing.  That is to say, flying blind.

I don’t know about anyone else, but when I’m playing a “signature” course, I usually get a little antsy.  I think, “It must be very difficult, and too much for me, or it wouldn’t have the reputation it has.”  That isn’t logical, but my mind often works in mysterious ways.  I did know enough about Strantz’s work, especially at Tobacco Road, to know this round of golf would be different at a minimum.  I was thinking blind tee shots and hidden hazards and unfair greens.

Thankfully, my trepidation was misplaced.  We knew exactly where to go on each hole, and we knew where the greens and fairways were.  Maybe not the complete green or fairway, but we knew where we were supposed to aim a golf ball.  Tot Hill Farm is not unfair. 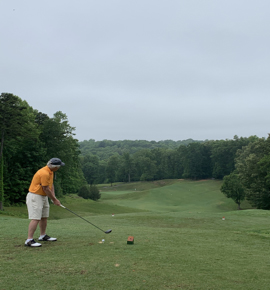 Your faithful correspondent on the downhill par-4 first hole

To set the stage:  It had rained practically every day for the past week in the Carolinas, so we knew it was going to be wet, and it was.  Really, really wet.  Secondly, the operative word in Tot Hill Farm is Hill.  It is set into the side-- and  back, and front--of a hill.  Not only are there not any flat holes (with the very notable exceptions of the 16th and 17th), most are significantly uphill or downhill.

The ninth and eighteenth in particular are significant uphill climbs.  I can't imagine anyone even thinking about walking this course— in fact, our cart was struggling by the end of the round.  Tot Hill Farm is not Caledonia Golf and Fish Club. 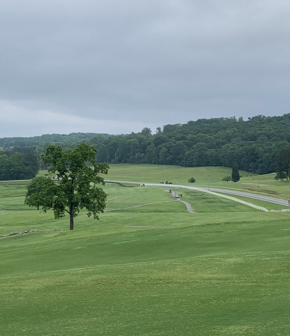 Looking down the steep 18th fairway from the green

I'm struggling to re-discover my golf game after playing very little last year, so I want to separate how I played with how I viewed the course.  I'm not a golf course architect critic and don't pretend to be (unlike many on the internet), but any golfer would conclude that this is a difficult piece of property on which to develop a golf course, regardless of the architect.  It's hilly, rocky, and wooded, with a creek that comes into play on every par-3 as well as a majority of the other holes.  Mike Strantz, A.W. Tillinghast, or Joe Schmoe was going to be challenged by placing a golf course on this quite rocky terrain. Incorporating the creek as a hazard in front of a majority of the greens was an obvious design consideration.  And it seems the rest of the course was routed around the par-3s and their placement in conjunction with the creek. 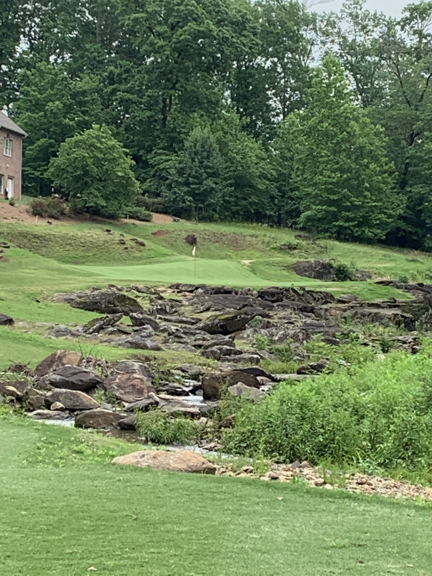 The creek, and rocks, and tiered green of the par-3 thirteenth

If I didn't know that Mike Strantz had designed both Caledonia and Tot Hill Farm, I'd have never made that connection.  There is little in common between the two courses.

Tot Hill Farm is not a long course.  From the tips, it plays 6543 yards.  I played from the green tees, which were the next-to-longest at 6214.  The course plays longer than that due to all the severe slope changes, particularly with most of the par-5s playing uphill.  Throw in the really wet conditions with little to no run-out from the tee shot and it probably played closer to 6400 yards.

There was very little rough.  Losing balls in the rough is one of my major pet peeves, but that was not an issue here.  Any balls that found the rough were certainly findable.  There are plenty of chances to lose a ball in the dense woods that border practically every hole, or in the ever-present creek named for Betty McGee, but not in the rough.

Due to all the rain, it was cart path only.  And most of the cart paths are on the high slope of any particular hole, which makes design sense.  It also means that most of the time, there was a long walk from the cart to the ball, which would typically settle at the low point of the fairway.  We all walked a lot!  That's not a complaint, just an observation, but it made for a five-hour round. 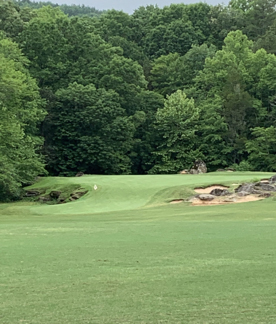 Greens were in very good-to-great shape.  They were a touch slow, which again with all the wet weather was not surprising.   Speaking of greens, it has more two-tiered greens on one course than any I have ever played (at least five).

Fairways were for the most part in very good shape as well.  There were some bare areas and a few edges of greens were barren but I'd give the overall condition a B.

This isn't a fault of the course per se but it was extremely hard to chip and pitch because of how wet everything was.  Conditions around the greens ranged from very wet to mud, and I, for one, have not learned how to chip out of mud (I mean, I'm having difficulty chipping out of perfect, fluffy conditions, so mud is out of my league, but that's a topic for another day).  There were a few shots where I just had to hack it and hope for the best.

As mentioned above, there is a lot of rock--sometimes big rock-- around Tot Hill Farm, and a few times I had a well-struck shot hit a rock and carom into never-never land.  A few holes have rock fences, sometimes crossing the fairway at random points.  The tenth hole is a good example- a respectable drive will clear the wall, but if you're short, the wall is a major obstacle to clear and still reach the green. 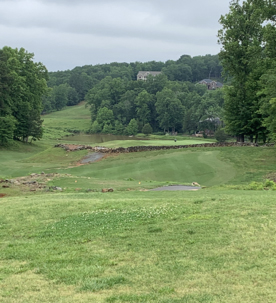 Tenth fairway with the rock wall

Some of the greens are carved around said rock, making for greens that may have a lot of square footage but in reality are small in size.  If a player is going to score well at this course, he/she will need to be accurate with approach shots into the often shallow greens.

About half of the cart paths are in fact gravel.  I hope the plan is to pave those sometime soon, as dodging washouts was a common occurrence on many holes.

Tot Hill Farm is actually a very fair course set into very difficult terrain.  It is a course that the great majority of golfers would have a difficult time playing well upon their first visit.  Many greens are at least partially hidden from view-- a Strantz design technique.  Many fairways are much wider and more generous than they appear from the tee box--again, a Strantz design philosophy.  Misdirection, at least at Tot Hill Farm, is as much a defense as any bunker or the ubiquitous Betty McGee creek.  Knowing that would be of benefit to any golfer upon replay.

The back nine is considerably shorter than the front nine and has three par-3s, which lends to better scoring.  I had four pars on the back including on #17, the number one handicap hole, and 18 (and I would have had two more if not for three-putting), so I ended on a high note.

The bottom line of any golf course anywhere is if a golfer would want to play it again.  I want to play Tot Hill Farm again.  Not because I loved it (or hated it and want to beat it into submission).  Now that I know what to expect and how it plays, I want to let it dry out, move up a set of tees, and give it another go.

If you’re interested in Mike Strantz’ legacy, Golf.com has a great article about Strantz. Click here.  (Editor’s Note:  Golf Advisor also posted a comprehensive review of Strantz’ work.  It was written by my son, Tim Gavrich, who has been a fan of the architect since before Tim played high school golf.  Some excellent photos are included.  Click here.)