A Tale of Two Nines 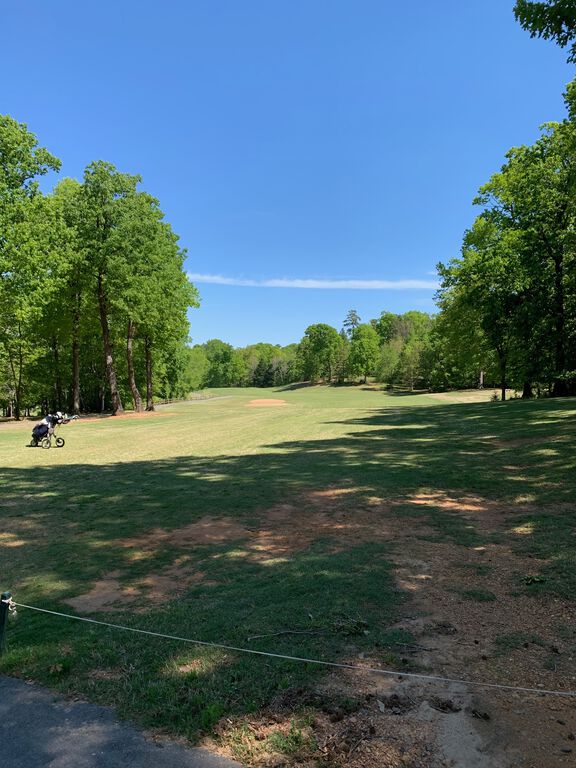 One of the benefits of writing a course review for OTBCP is that there is no requirement or expectation to discuss how well we played the course.

It’s all about the course, as it should be.

Considering that I have not played a round of golf since at least last August, then had knee replacement surgery, and am attempting to incorporate some swing changes as I re-start my golf game in 2020, my expectations for how well I played my first round of the year were, in a word, low.  Which is as it should be.  And is fortunate.  Because that is how I played.  Really, really, low.

But enough about me.  Let’s talk about the course.

First of all, as I write this, North Carolina is a state that is allowing golf during Covid-19, among few other activities.  Therefore, golf courses are crowded.  Every day is Saturday morning.  When I checked in for my round, the golf pro told me they were completely full today (Friday), were full yesterday, and were full all weekend.  Almost any industry you can name is struggling to stay solvent during the Coronavirus epidemic.  Not golf in North Carolina, nor in any other state that is allowing it to be played.  Golf courses, particularly municipal and public courses, are making a killing.  I’ve noticed green fees on GolfNow, TeeOff, and other sites are $10 to $20 higher than I remember seeing them at any time, especially during the week. 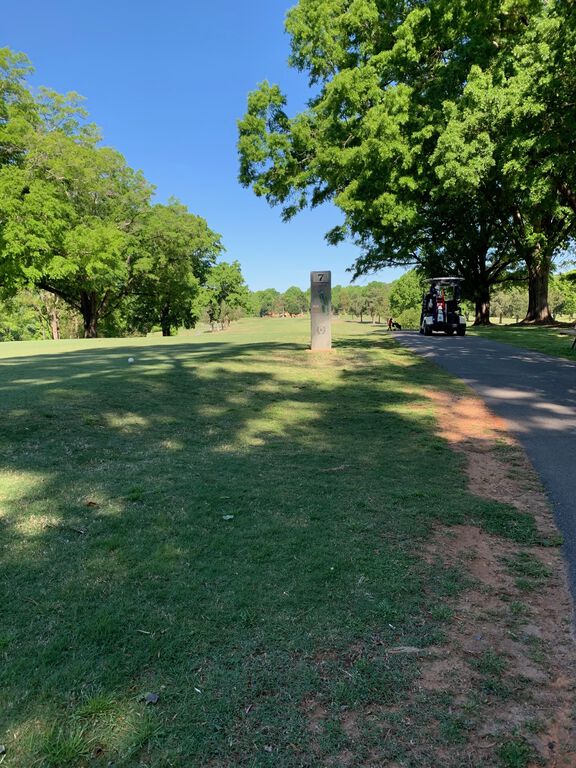 The law of supply and demand regarding golf in North Carolina is skewed toward demand.

Every course I’m aware of, including Monroe CC, is practicing social distancing.  One person to a cart.  No touching of the flagsticks.  No one allowed inside the pro shop (which makes using the restroom before the round a no-go, if you get my drift).  I met the three folks I was playing with, all of whom are members, outside the pro shop.  We fist bumped from a distance, then went to the first tee.

Monroe CC is a misnomer, at least in 2020.  At one time, it was, in fact, a private country club.  In the 1930s Donald Ross designed a nine-hole course for the folks of Monroe and Union County, just east of Charlotte-Mecklenburg County, NC.  Now, however, it has 18 holes and is a public course, owned by the City of Monroe and managed by the Parks and Recreation Department. 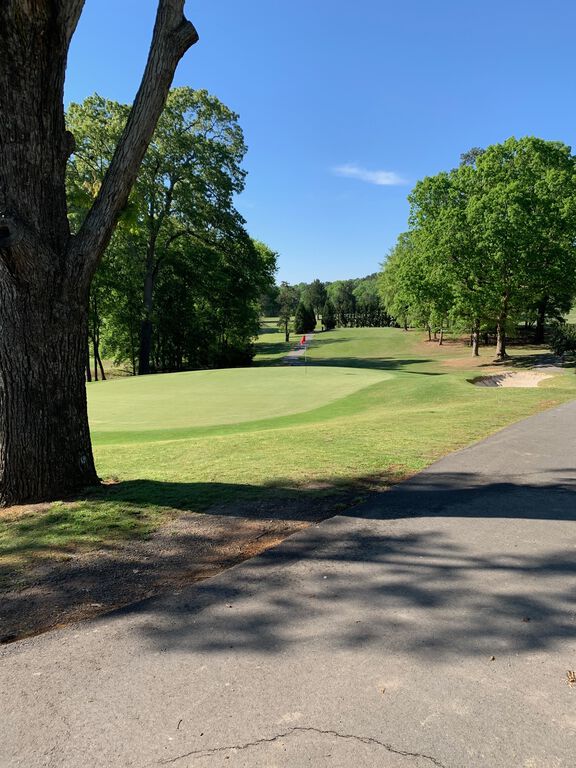 From behind par 3 2nd hole.

Monroe Country Club’s front nine is the original Donald Ross design, and from my limited experience playing Donald Ross courses, it fits the mold.  Practically every green is elevated, small, and has severe drop-offs, often into deep bunkers.  If one happens to be on the green, one is usually left with a 15- to 20-foot putt at most.  There were few if any straight putts that I experienced.  The fact that the greens had recently been verticut made putting even more of an adventure than they normally would be.  Most of the holes were straight-away, or mostly so.  No hole had a dogleg so severe that I could not see the flag.

A representative sample was the third hole, an uphill par four of 350 yards from the back tees.  A couple of trees strategically placed on the left side of the rough line (think the old Eisenhower Tree on the 17th hole at Augusta National) asks for, but doesn’t demand, a right-to-left tee ball.  The green is long and narrow, two tiered.  Most of the holes on the front were similar.

And then we move to the back nine.  I have never played a golf course that has two more fundamentally different sets of nines.  The front nine had holes that paralleled each other.  Large, mature trees were present, but mostly were there to frame the fairways.  The back nine is a much more traditional parkland nine.  Tree-lined is not really accurate; woods-lined is.  If you hit into the trees on the front nine, you can find your ball.  If you hit into the trees on the back nine, you are in the woods —with poison ivy, undergrowth, chiggers and trees.  Doglegs are common -- real doglegs, where the golfer cannot see the green from the tee.  The fairways are wider, allowing more room for wayward drives.  The greens are significantly larger — at least 25% larger than those on the front nine, and in some cases more.  Plus, the slopes were less severe.  The breaks are more subtle which, after playing the front nine, can lure a golfer into overreading breaks that aren’t there. 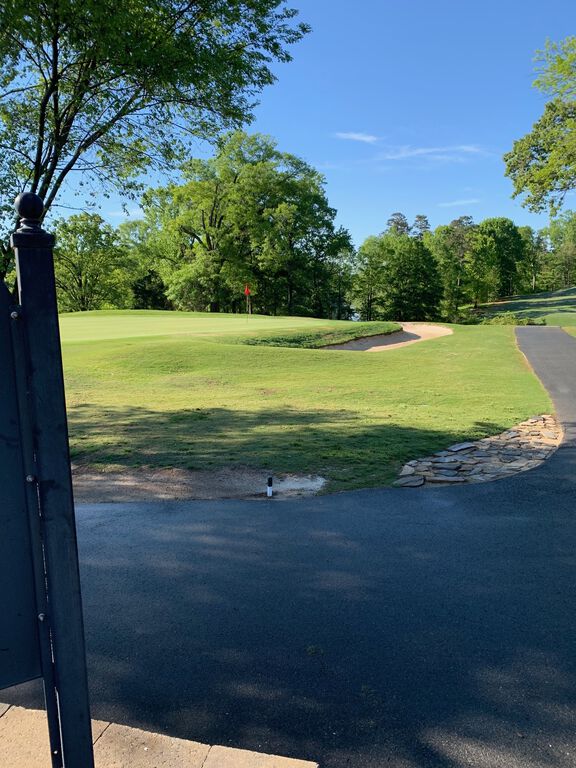 I read one review of Monroe from a golfer who wrote the back nine at Monroe was his favorite nine hole course in the area, and the front nine was his least favorite.  Beauty is in the eye of the beholder, and for those who love a traditional Donald Ross layout, they will enjoy the front nine.  For those who prefer a traditional parkland layout where maneuvering the golf ball is part of the skillset, they will enjoy the back nine.

The course was in great shape, making allowances for the verticut greens that had not yet completely grown back.  The bunkers were full of sand but were not raked and as no rakes were present (nothing around to encourage touching), bunker shots were mostly from compacted sand, which added to the challenge.  However, that is the case, from what I’ve heard, at most courses these days.  A benefit I had not anticipated, playing on a day when every spot on the tee sheet was full, was that with individual carts, we still played in less than three and a half hours.

Looking for a Donald Ross design and looking to conquer the infamous Ross-designed greens?  Head to Monroe Country Club.  I’ll be back, and I fully expect to lower my score by 10 or more strokes.

Brad Chambers is the creator and publisher of ShootingYourAge.com, a web site dedicated to golfers who have reached the point at which their age and golf score have a reasonable possibility of merging. He is also the author of “Think Better, Play Smarter and Manage Your Way to Better Golf Scores,” available at Amazon.com. His occupational years spanned two careers – U.S. Navy officer and administrative leader in municipal government. Brad lives in Charlotte, NC, with his wife Alice, his chief photographer, editor, assistant writer and head cheerleader.