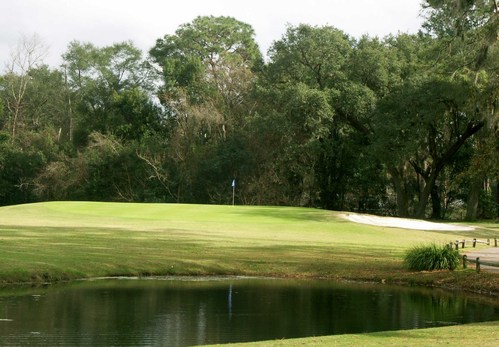 11th par 3
One of the few forced carries is to this lovely par 3. 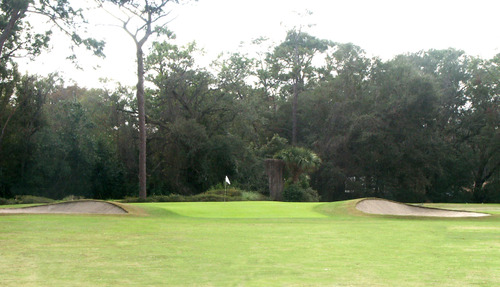 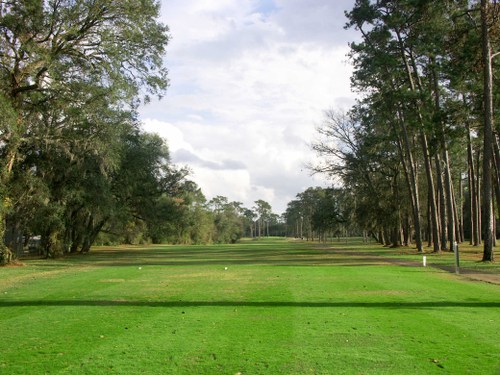 The 3rd hole at the tee A lovely driving hole, just keep it straight. 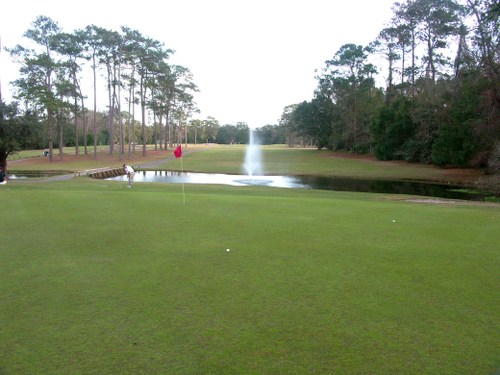 The slippery 5th hole A simple shot across the water to a slippery, sloped green. 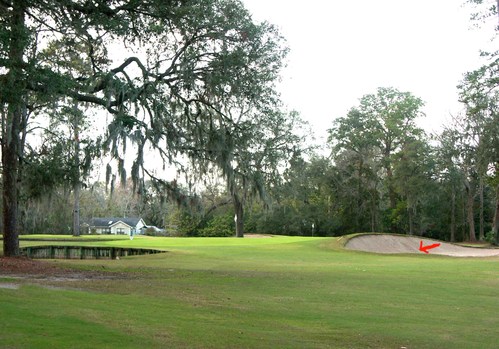 Hogans Alley - the 6th par 3 hole How could the Wee Ice Mon take an 11 on this hole? I boggles the mind. 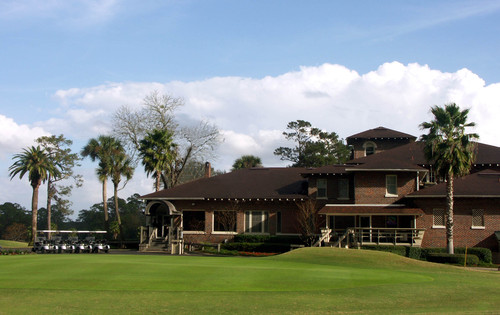 Stylish Clubhouse With a restoration and cleaning, this could be a showcase clubhouse.
Previous Next

Hyde Park Golf Course is a link to America's golfing past that needs to be preserved. This is an older course, built just after World War I by Donald Ross, that was just outside of the city proper at the time. Over time, modest housing (by modern standards) was built surrounding the course but not ON the course so it retains that walk-in-the-park feel when you play there.  The clubhouse is an impressive brick and tile structure that with a little TLC could really become the landmark it deserves to be.

Hyde Park was a regular stop on the men’s and women’s PGA Tour during the ’30s, ’40s and ’50s. At one event, Ben Hogan took an 11 on the par-3 sixth, which became known as “Hogan’s Alley.” Mickey Wright won her first official pro tournament here in 1956. Sam Snead, Byron Nelson, Ben Hogan, Babe Zaharias, Patty Berg, Louise Suggs – they’ve all played there and played well, too. Jacksonville was a hot spot at the time, a town that was filled with wealth as the port city became increasingly important after the Second World War.

If you travel to Jacksonville, this now modest course should be a must play in your itinerary.  It is not particularly well groomed anymore, but then it probably never was lush. Former PGA touring pros Billy Maxwell and Chris Blocker have owned and operated the course for over 30 years. They have rebuilt and regrassed the greens since taking it over, but the fact is that no major alterations have occurred since Hyde Park was it was originally laid out by Ross using topo maps in 1925. This means you can play golf on a course that feels different because it can from an era when golf was played differently that it is now.  There are just a few forced carries, but none over 100 yards, just enough to challenge the budding golfer and to keep the better golfers focused.

The 11th hole is just such an example. The high faced bunker fronting the green can be a daunting obstacle, yet it can be easily avoided by those not greedy for par. A pond at the left doesn't really come into play except for the truly errant shot that deserves an extra penalty for waywardness. Still, it is difficult to sit under the giant willow near the pond and imagine how Mr. Hogan could have taken an 11 there.

Wars come and go. The energy and excitement of such tragedies often cause some jewels to be lost or sacrificed in the rush of history.  Fortunately, Hyde Park is one jewel that humanity has thus far left as a legacy for golf's future.

November 2019 review: “Visiting from Canada, family in Ponte Vedre a year ago & met/played with pro shop staff/Billy; he recommended Hyde Park; finally made it over after a year. Worth the drive from PV; the classic Ross (1925) is in great shape; every aspect enjoyable. Staff very accommodating; $26 green fee/cart can’t be beat.”