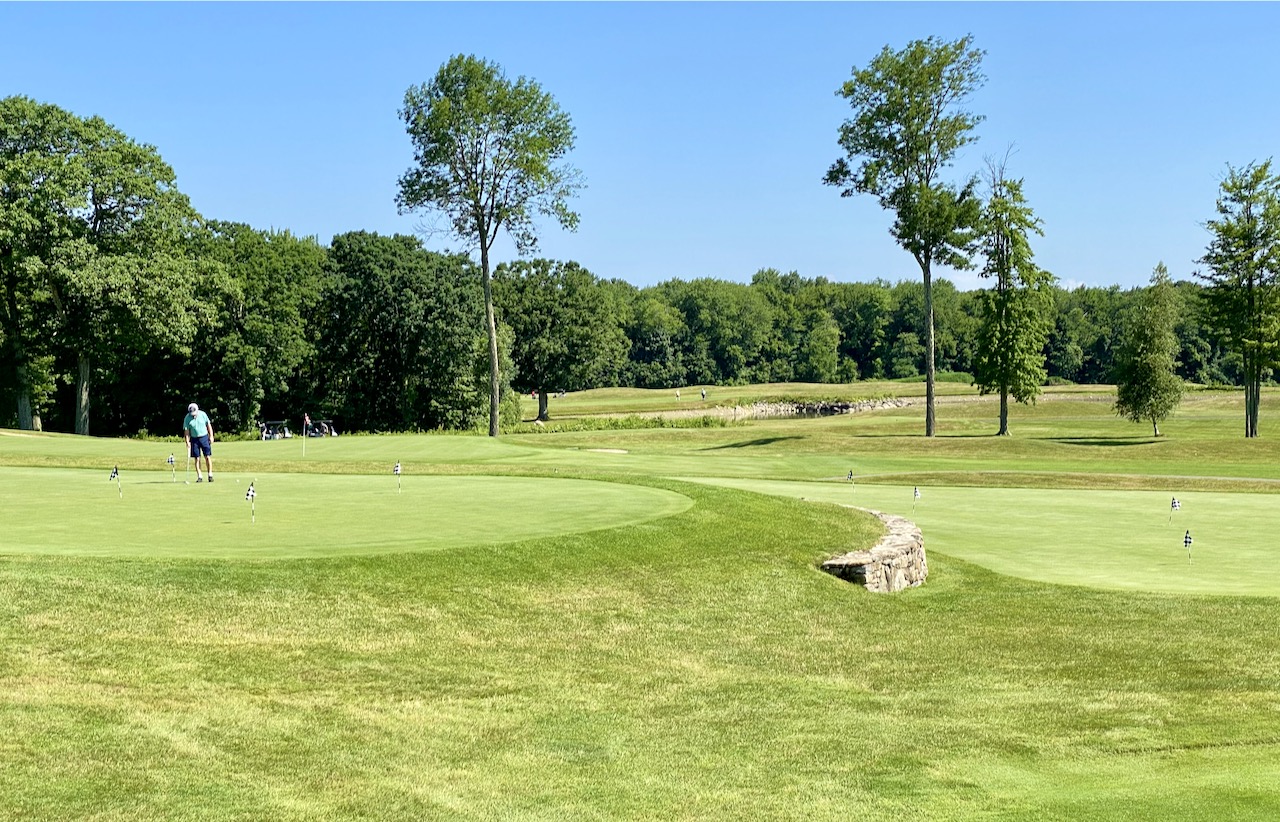 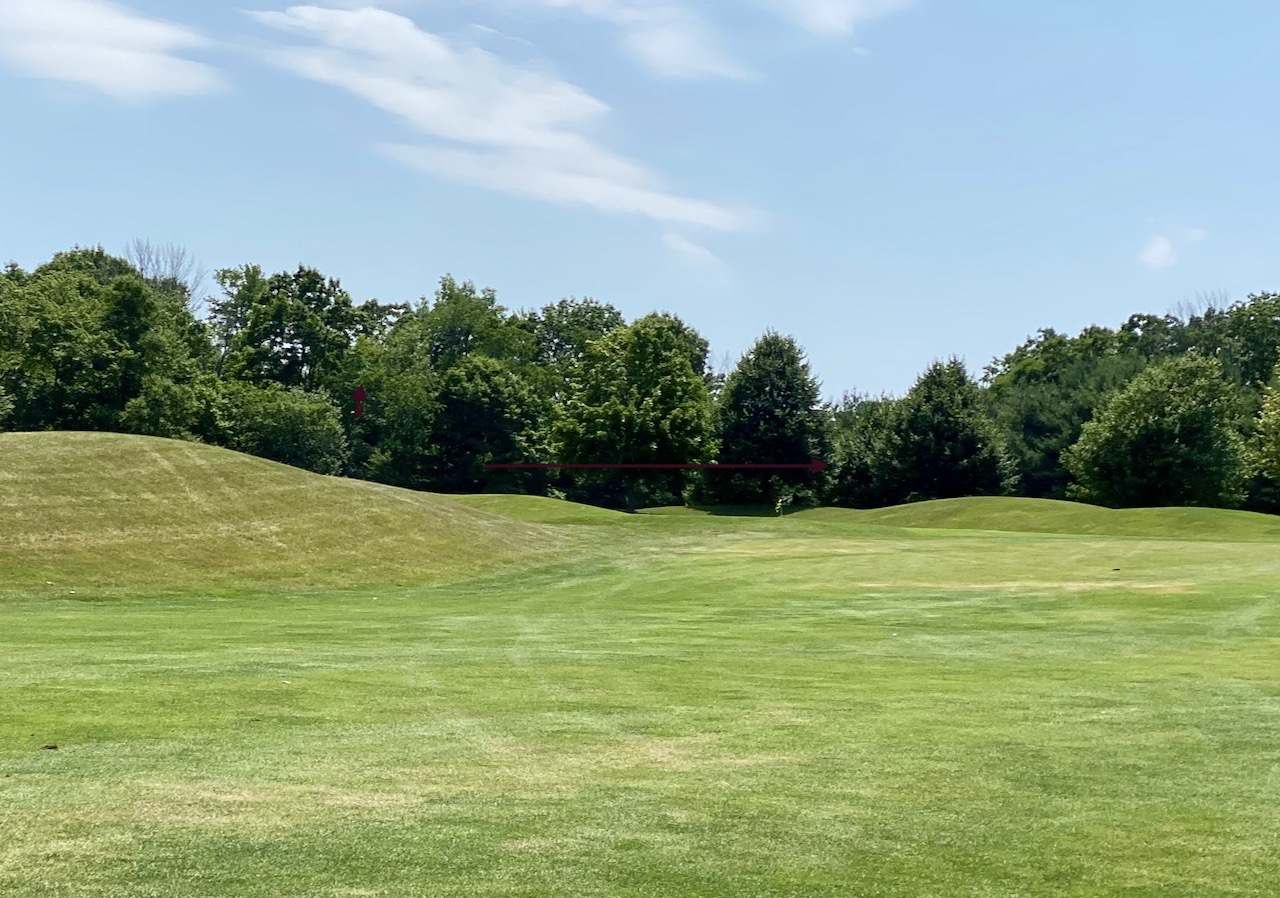 Par 5 16th, with blind third shot to green behind mogul. 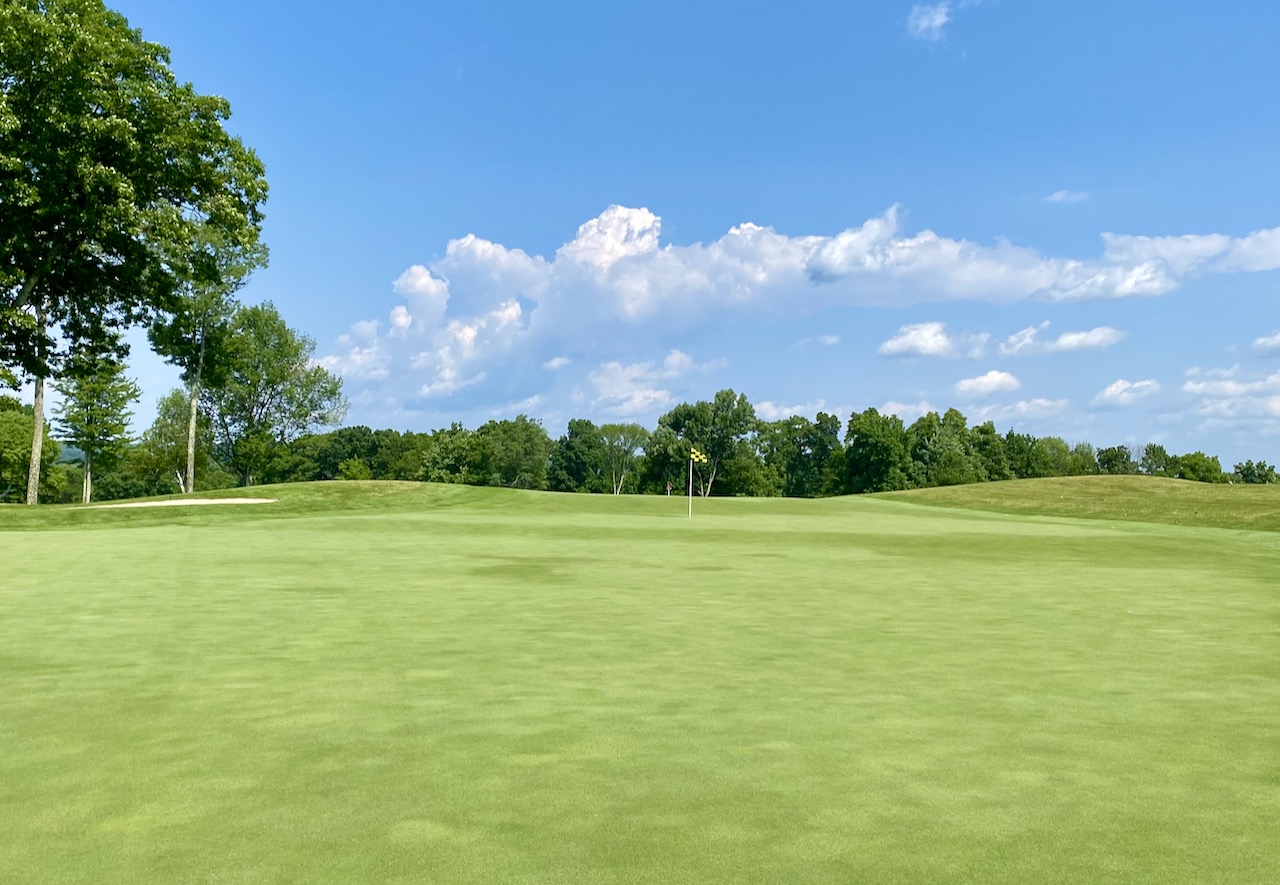 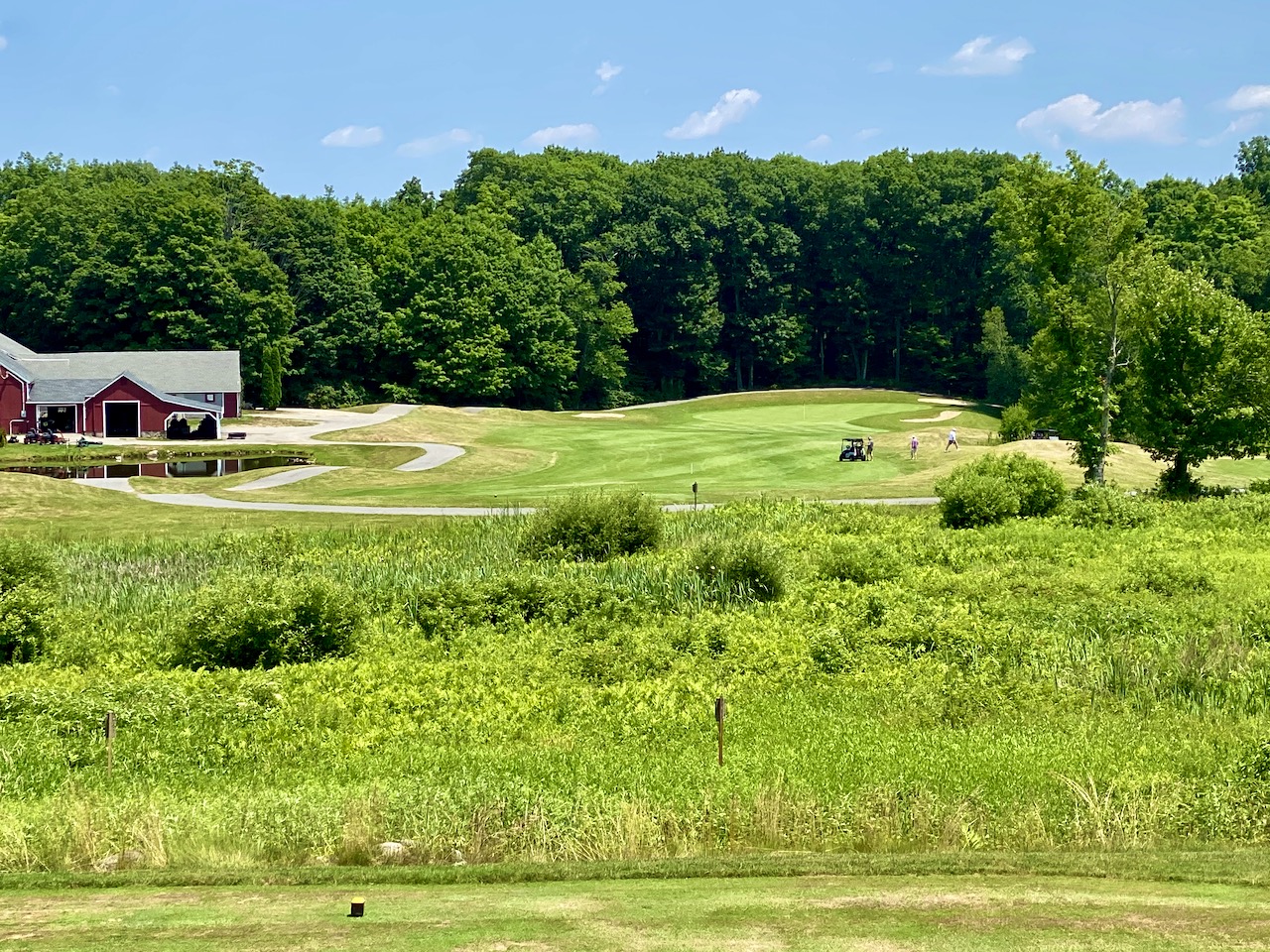 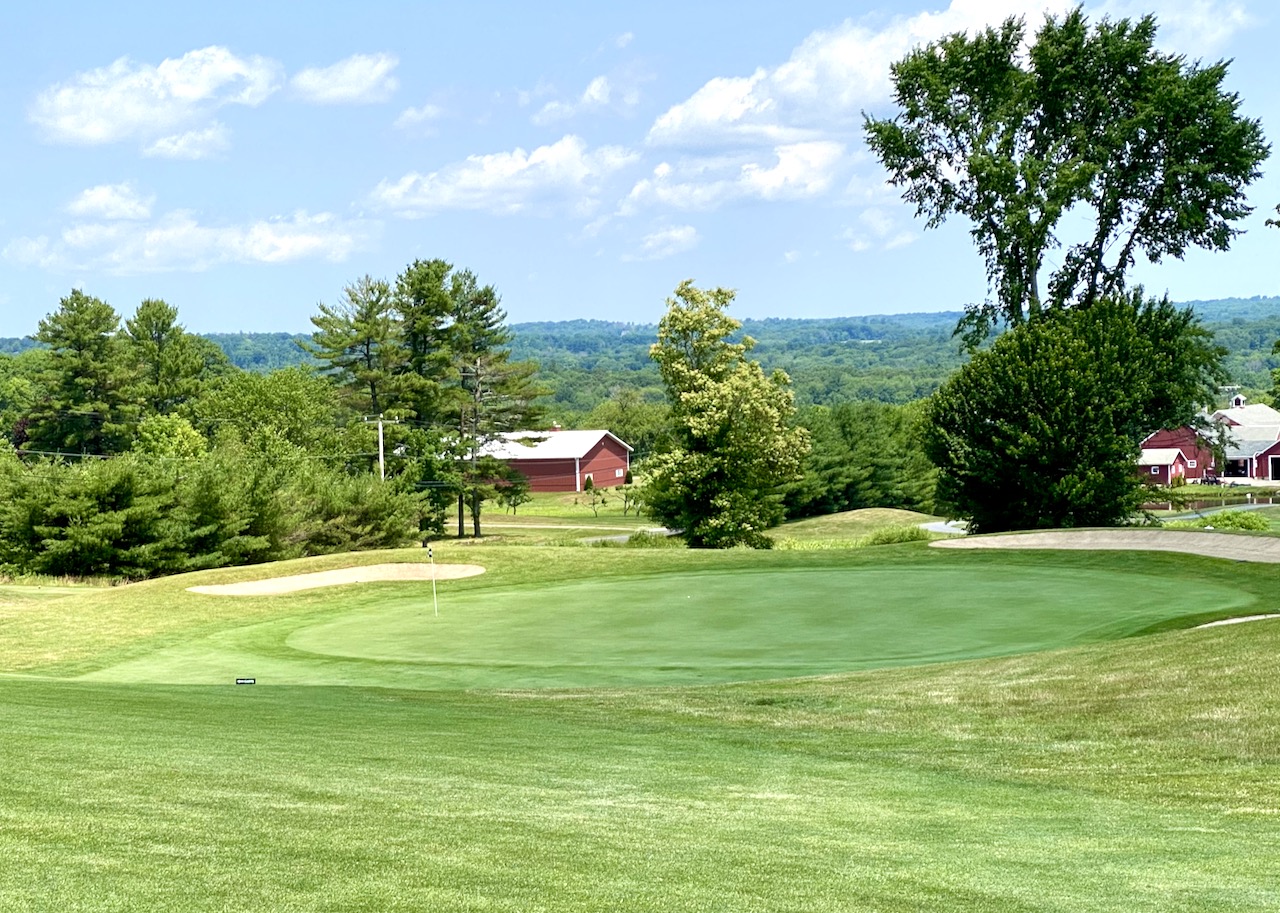 14th green at the end of a hard dogleg right. 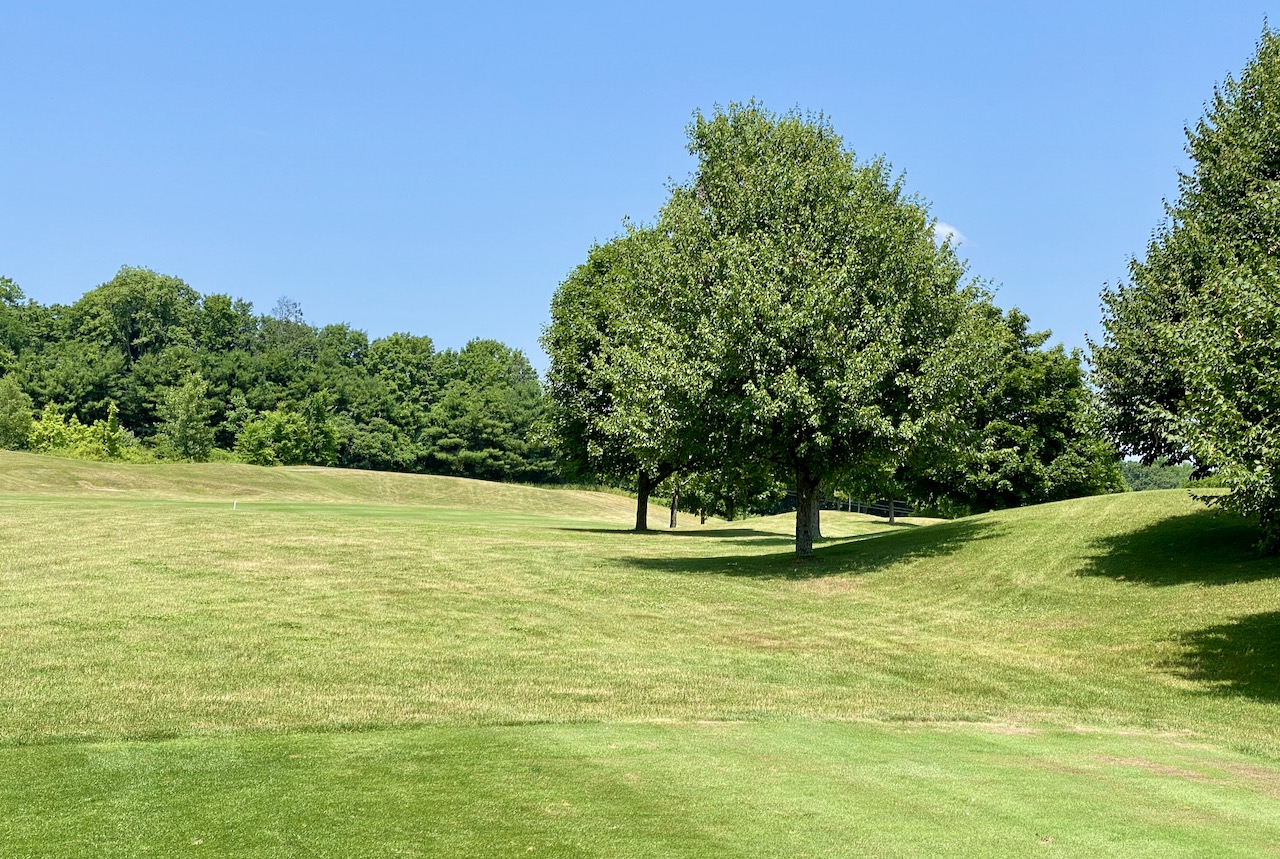 From the tee box on #14, the short way home is directly over the trees. 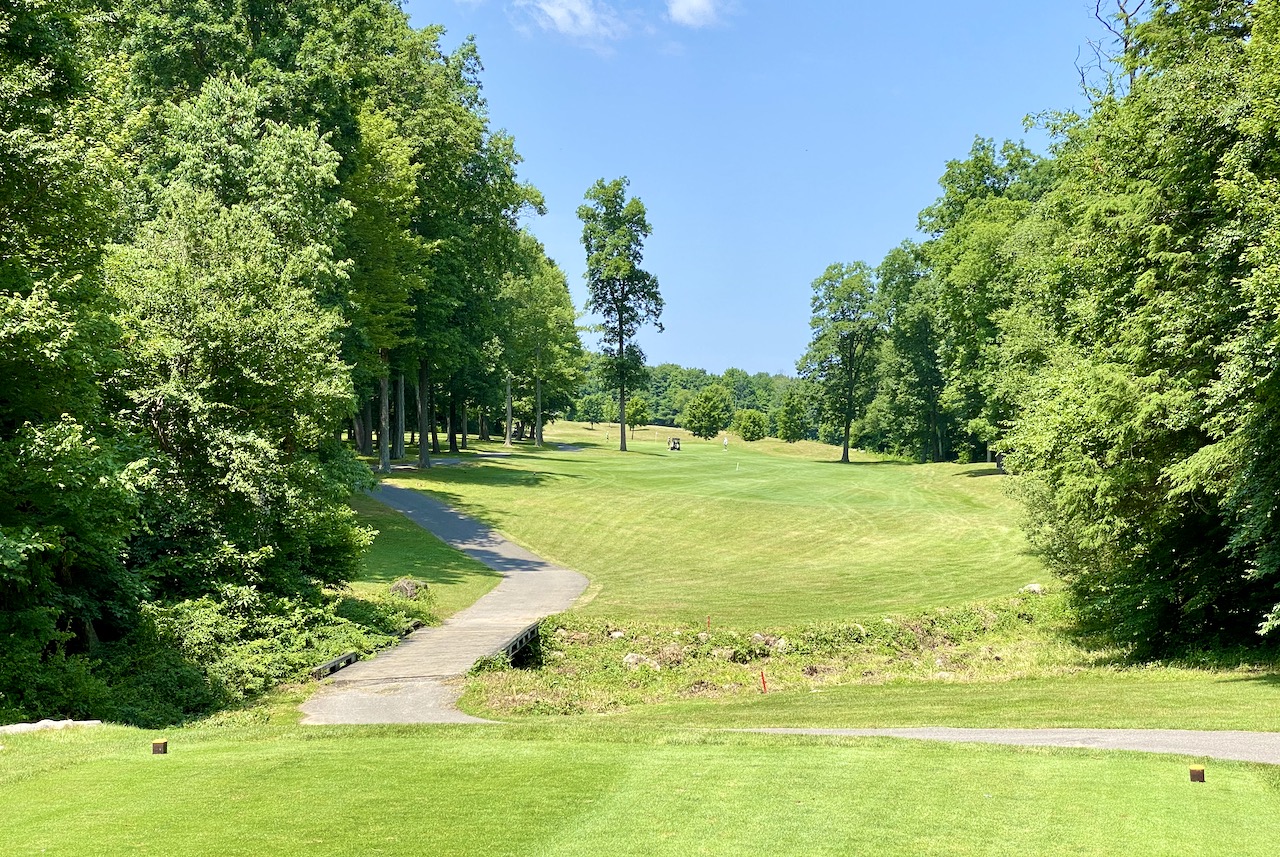 The par 4 13th demands a tee shot down the right side. 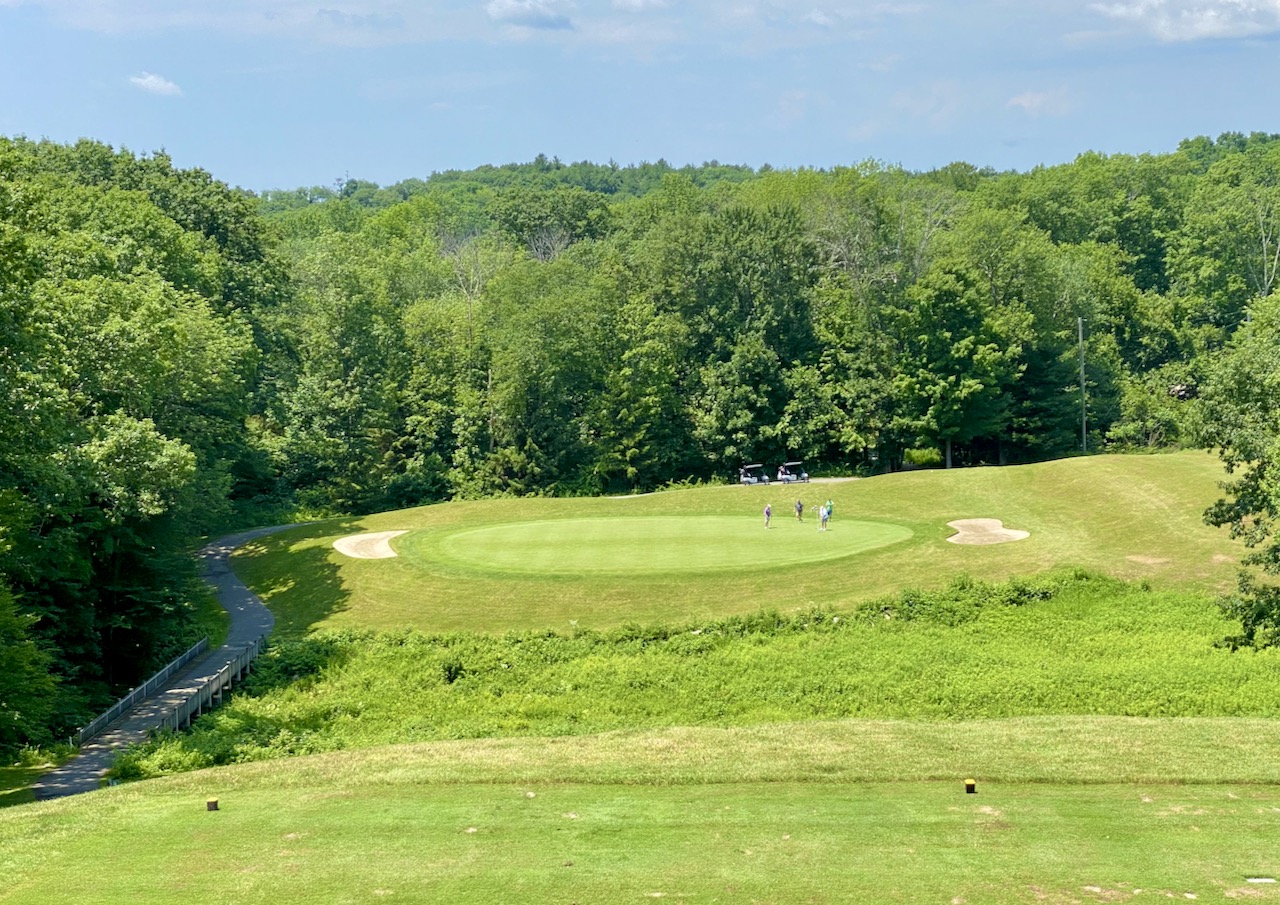 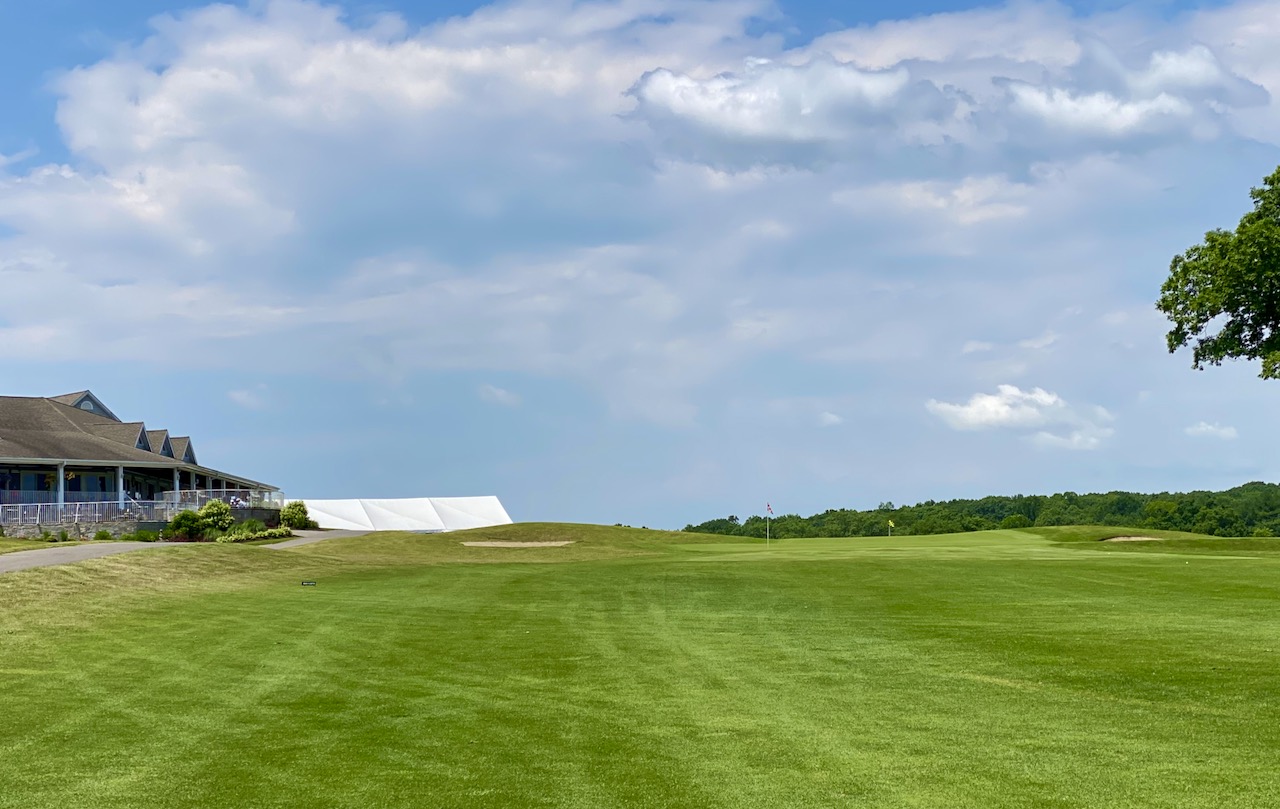 The approach to the giant 9th green, shared with the 18th hole. 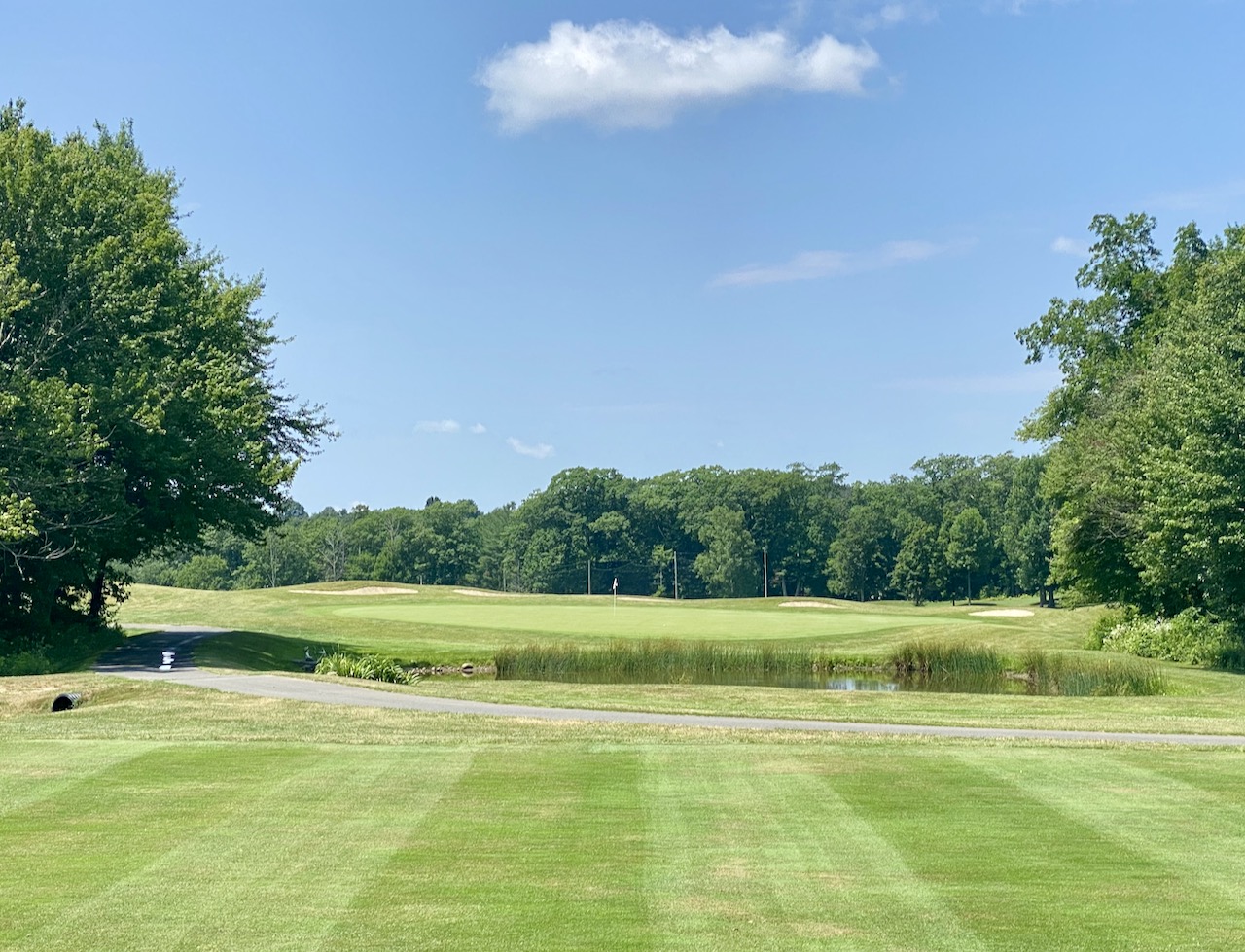 The par 3 7th, one of the few on the course with water in play. 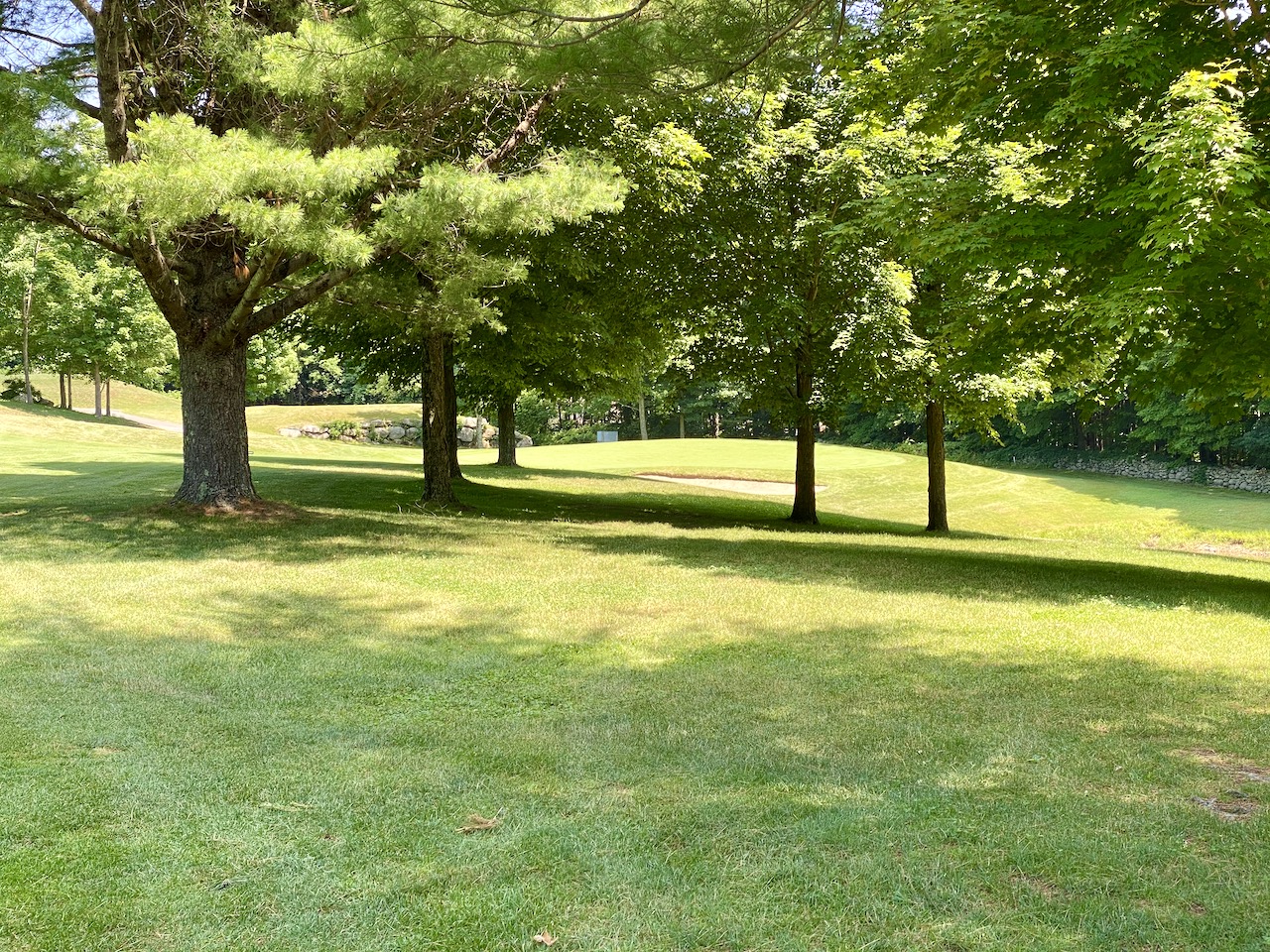 This is what you get when you push your drive a little to the right on the par 4 5th hole. 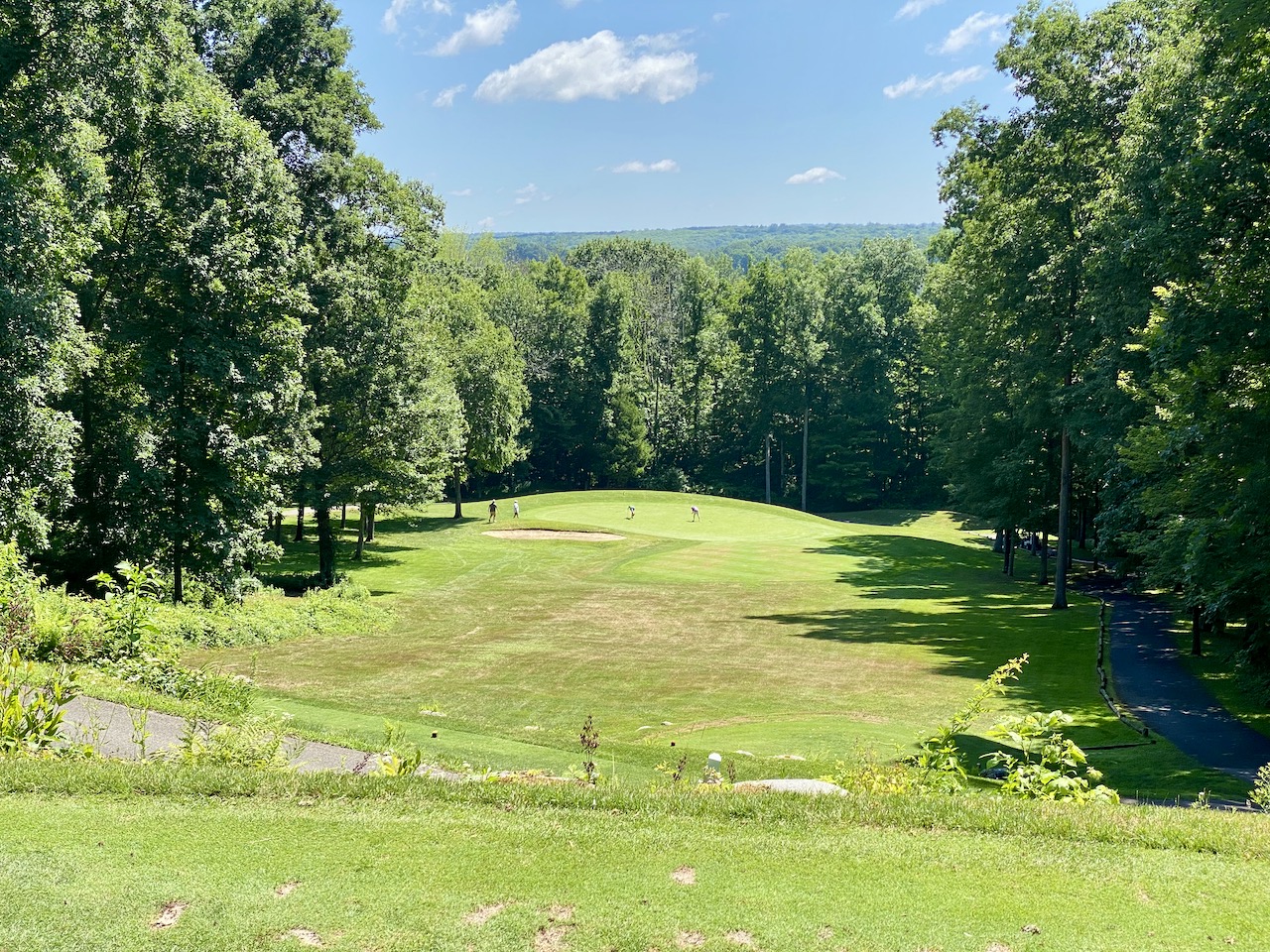 At 160 yards from the white tees, the par 3 4th hole plays two clubs shorter given the downhill trajectory. 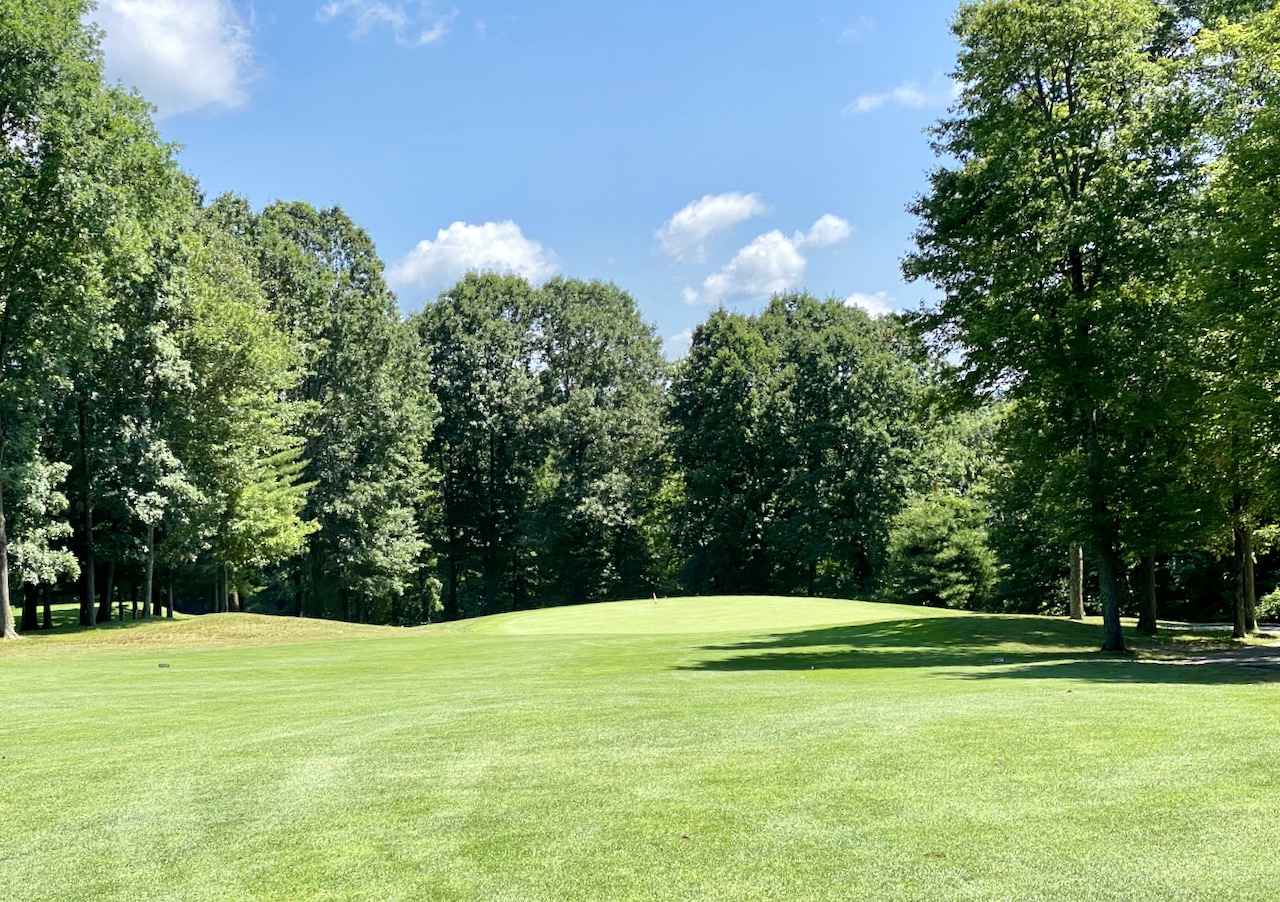 Many of the greens at Fairview Farm are backed by thick stands of trees. 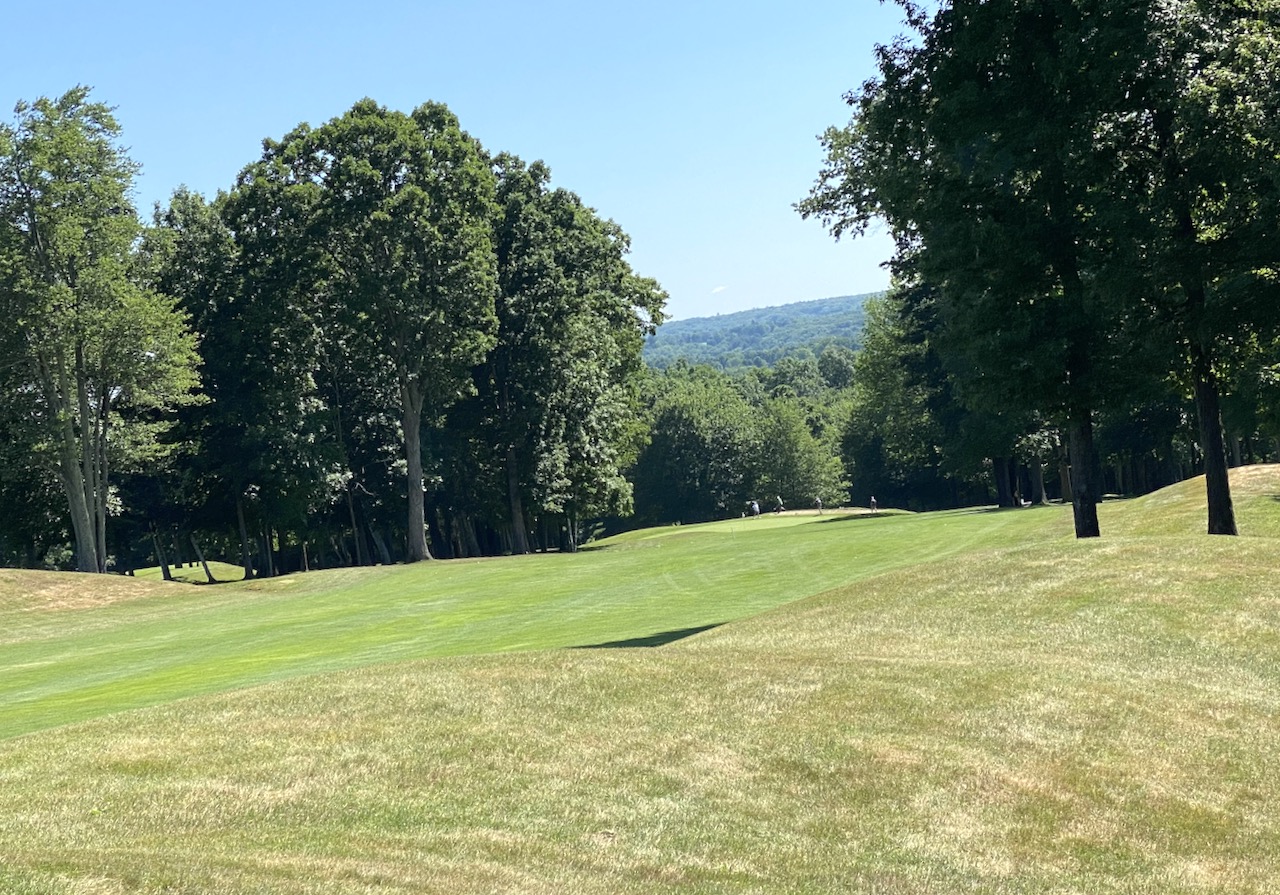 The par 4 1st hole at Fairview Farm is tougher than most, given the narrow, tilted fairway.
Previous Next

Fairview Farm in Harwinton, CT, meets the strictest definition of off the beaten cart path.  It is out in the country, on the site of a former working farm, a good 45 minutes from Hartford and 30 minutes from my own home.  In other words, you have to go a bit out of your way to get there.

It is worth the trip in that the course is typically in fine condition, the staff of the family-run business is always friendly and helpful, and the layout is not quite like any other public golf course within an hour’s radius.  It is $10 to $15 more for green fees and cart than competition an hour away, and Fairview is one of the few public courses in the area that does not publish a senior rate.  The layout’s idiosyncrasy is that it is narrow but not long, fun but not a pushover, and a bit of a mismatch between the ratings on the scorecard and how the course plays.  Oh, and it was designed by the owner, Bob Ferrarotti, in 2000. (The scorecard gives props to “help from friend Dick Christian.”)

I played from the white tees at what for me is an ideal distance of just over 6,000 yards (6,174 to be precise).  According to the card, that gives the layout a rating of 69.5 (against its par of 72) and a slope of 121.  It is the slope that seems out of whack to me based on some narrow fairways lined on both sides with dense stands of trees.  To make things even more challenging, some of those fairways are sloped from one side to the other.  On a day when I pretty much played bogey golf and shot an 87, the slope felt more like it belonged in the high 120s.

That said, most of the greens are generous and in fine shape.  I’d estimate the stimpmeter rating somewhere around the 9 level.  Those who like to warm up with an open, non-controversial first hole will be hard pressed to enjoy the opener at Fairview Farm, as it is probably the narrowest on the course.  There is an amply sized practice range across the road from the clubhouse for those who want to prepare properly for the 380-yard par 4.  Because it is downhill, a three metal might be advisable, although I hit driver and dribbled just off the right edge of the fairway.

There are a couple of hard doglegs that demand some thought and a resolute strategy.  The 5th makes almost a right angle turn toward the green at the end of a line of trees, and the gamble is to either bust a drive over the trees and hope you fly 240 yards or so, in which case the ball could bound down toward the green; or play safely along the tree line and expect to leave a very short pitch to one of the smallest greens on the course.  (Keep in mind that dogleg distances are measured down the middle of the fairway all the way to the green; those who remember their high school geometry will understand the hypotenuse is much shorter.)  Later in the round, you may think you are replaying the same hole at #17 which, at 307 yards, is 23 yards shorter than #5 but the dogleg is not quite as sharp, making it a longer poke to get near the green.

The four par 5s from the white tees range in distance from 450 yards to 545 yards; two of them were my least favorite holes of the day and they came toward the end of the round.  The 16th is the longest one which means only the biggest bangers will have a wedge to the green on their third shots.  But the rest of us will be back 50 to 100 yards from where the shot to the green is totally blind, hidden about 75 yards beyond a large mogul that obscures both pin and green.  I was totally disoriented from 135 yards out, but luckily I was paired with two ladies who play at Fairview regularly and pointed the way.  And then on #18, a rather blasé finishing hole except for the green, I was “rewarded” for my decent drive of about 210 yards with a retaining wall in my backswing.  My drive had just drippled over the wall, which faces toward the green, so that I had a restricted backswing and could not get the ball in position for an easy third shot.  Being penalized for a good drive in the middle of a fairway is the very definition of unfair and rather shoddy design.  The only compensation was that, once at the green, I was reminded of the Scottish experience of putting on a green big enough to be used by two holes, in this case #9 and #18. 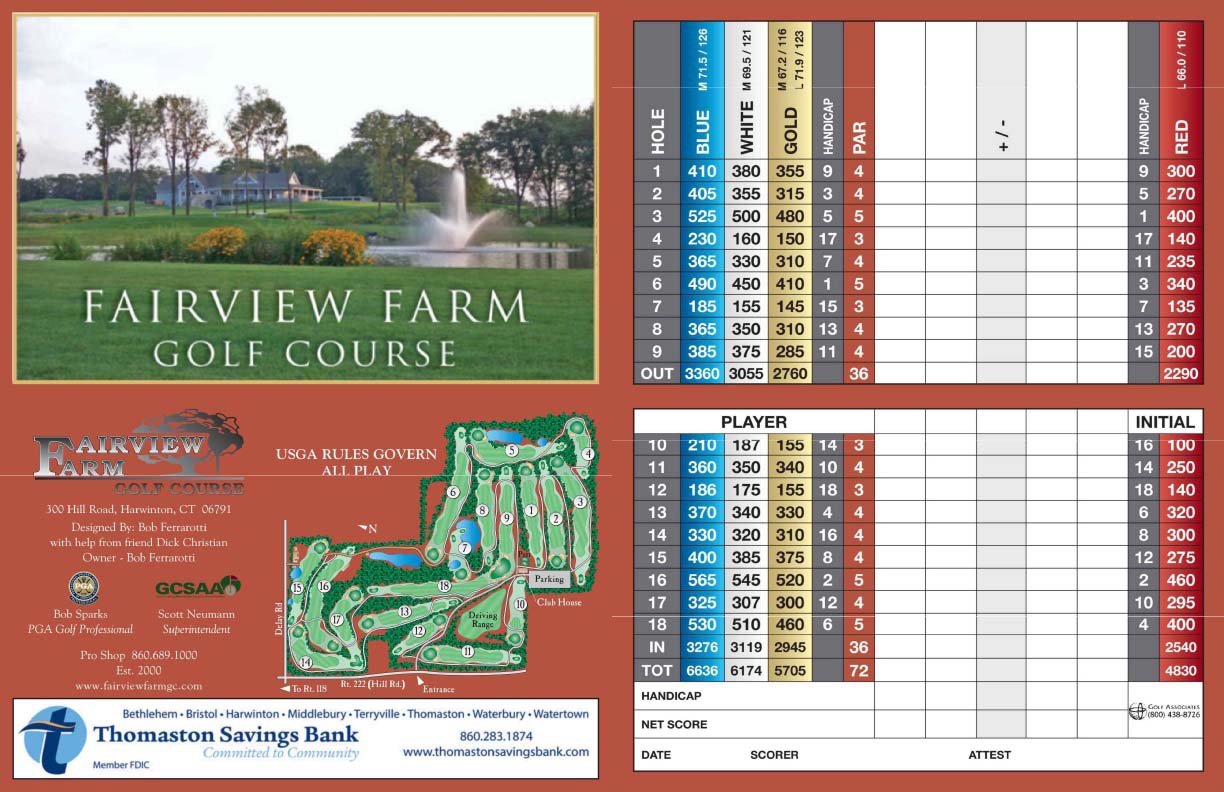 I average play at Fairview Farm about once every two years, and one of the more impressive things about the place is the food.  After my round ended around 2:30 pm, I was hungry but didn’t want to make excuses later to my wife about my lack of dinner appetite; therefore, I ordered a simple plate of nachos to go with my beer.  There was nothing simple about the size of it, and it was exquisitely made, the chicken on it well seasoned and tender, and the requisite amount of cheese had been melted throughout.  And it was huge, making me wish I had the rest of a foursome with me; the salsa and sour cream delivered on the side could not have stayed on the mound of nachos.  In any case I barely made it halfway through before crying uncle.

I admire successfully run family businesses, and Fairview Farm certainly lives up to that standard.  Between the golf and post-golf activity, the better part of a day there is always well spent.